Have you been paying attention?

They seek to rule not to serve.

They presume to rule through divine indulgence.

They craft their deity in their own image.

Wealth is their measure of all worth.

Self-enrichment is accepted as a legitimate pursuit of elected office.

They claim their privilege as an inalienable birth right, gifted by their messiah in recognition of their innate merit.

They are self-righteous yet they fear scrutiny.

Democratic norms are an inconvenience to be suffered if not perverted, ignored or discarded.

Authoritarian by instinct and punitive by inclination they claim to unify yet it is their nature to divide. The wedge and the dog whistle are favoured tools.

Fear though is their treasured weapon. Fear of change, fear of ‘the other’. They always seek an enemy of convenience with which to distract us be it brown folks, GetUp! or EVs.

They claim to be the champions of freedom yet they impose more and more controls on us with fewer and fewer constraints on themselves.

Empathy must be funded.

Ethics and standards are impediments.

Integrity is for losers.

Faith trumps truth, facts can be uncomfortable and so are entirely dispensable.

Morality is a flexible and transitory concept that can be replaced with confected outrage or contrived artlessness whenever their malfeasance or negligence is exposed.

The biggest sin is being caught.

Egalitarianism is an impractical lefty abstraction.

For them to win someone else must lose.

For them to thrive others must be sacrificed.

They resent every cent and every gesture that helps the powerless.

The niggling fear that someone, somewhere may be getting something that they themselves are not causes them great distress.

Everyone and everything is exploitable for private profit. The elderly and frail, the dispossessed, the disabled and vulnerable, those without a voice, our rivers, forests and oceans, natural disasters, wars and pandemics.

They are sour and hateful. The heavies and bullies and the compliant cowards, the liars, incompetents and dullards, sleazy upskirters and grifters – their uniformity is their hypocrisy and hubris. When not genuflecting at their alters on Sundays they’re stealing our planet out from under our kids’ future. Their party’s also-rans, so inculcated, so incapable of either curiosity or original thought have become victims of their own gaslighting – the useful idiots filling the spaces on the backbenches desperately seeking approval by repeating the tired tropes of discredited neo-liberal dogma and crackpot idiocies.

They abhor progress and will reverse it at every opportunity to safeguard their place at the front of the queue.

They seek reassurance in denialism as protection from inconvenient truths and an uncomfortable reality.

They indulge nutters and ratbags for political advantage.

Shock jocks megaphone their distractions and their lies to the gormless, the stupid and the lazy.

The non-compliant and anyone seeking to challenge their incompetence or expose their corruption will be subject to backgrounding, trolling, undermining, police raids and secret trials.

They will never allow an effective integrity commission. Apparently they’re not that confident their Jesus would offer a character reference. What utter humbugs they are.

They are transitioning from political party to a religiously-driven cult of greed and corruption.

If you’ve been paying attention the answer is obvious. I am Scott Morrison and they are the plaything of Rupert Murdoch – the Liberal/National coalition.

Fortunately our democracy will withstand this aberration. It’s up to the sleepwalkers, the waiverers, and the stranded Aussies, the unvaccinated, the un and under-employed, women and their allies who habitually vote Tory and those who would like the Great Barrier Reef to survive to ensure the L/NP are consigned to the bin at the earliest opportunity.

“Puritanism: The haunting fear that someone, somewhere, may be happy.” H. L. Mencken 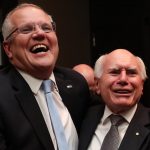 CANY YOU BELIEVE WE GET AWAY WITH THIS SHIT? (Image from dailytelegraph.com.au)