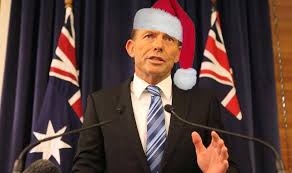 “Hi, can I have the joint credit card?”

“Well, I remember that waiter there who was so nice when I lost my wallet. I want to go back and thank him.”

“Couldn’t you just send him a card?”

“But aren’t we trying to save money?”

“Yes, but this is one of those things that will make me more popular with the Australian people and you can’t put a price on that.”

“What about our budget emergency?”

“Ok, I see what you’re trying to do here. You’re trying draw a link between the Prime Miniature’s visit to the Netherlands and your visit to Noosa, but I think you’ll just end up sounding like a complete prat!”

“Why not? Is it because I shouldn’t politicise tragedy?”

“No. Politicising tragedy is fine in certain circumstances. Like when people die installing insulation because Labor funded it. You can criticise them for a lack of oversight and completely ignore this runs contrary to your determination to end red tape. No, you shouldn’t write that because it’s not true!”

“You don’t think he’s going there for poll driven reasons?”

“No, I don’t think it’s true that it’s boosted his standing in the polls.”

“And I never said any of this. So why are you pretending that you had this conversation?”