There’s no denying it, Australian women have come a long way. From the married women’s property act to the criminalisation of marital rape. From the right to vote, or attend university to the triumph of Joyce Barry, (who became Melbourne’s first female tram driver in 1975), western women have made massive strides forward in our right to self determination.

It is much the same for our sisters in Europe and North America. We western women are now so acclimatised to our opportunities, rights and freedoms that some of us feel that feminism is no longer needed; a fact that was recently bought home to me by the face book meme, the “WomenAgainstFeminism” page! Yes, you heard it right, a parade of overtly privileged girls have banded together to declare feminism officially no longer necessary. Apparently we women are now all so liberated, so riddled with choices, that the fight for women’s rights can be joyously tossed on the land fill of history. Yeah, kind of makes you want to party!! Trouble is, it’s simply not true.There are so many disturbing facts and figures in the global gender polemic it’s difficult to know where exactly to begin cataloging them. Whether it’s the relatively first world concerns, like media representation, pay disparity, political under-representation, pricing up female products, or even Saudi women not being permitted to drive; or more threatening, pernicious issues like so called honor killings, female infanticide, female genital mutilation, endemic rape, or child marriage, the world is a veritable smorgasbord of discrimination, violence and repression for vast swathes of it’s female inhabitants. Don’t these young ladies know this? Because if they do there is something in this meme I am failing to understand. How can anyone know that there are people are out there killing babies simply because they are girls, or raping 9 year olds under the guise of culturally sanctioned marriage, or murdering their daughters and sisters for the crime of having a boyfriend, and not think that something needs to be done about it?

While the freedom to drive to the mall, wear pretty dresses, stay at home with kids, and have a husband that doesn’t beat them is clearly quite enough liberation for them, do they seriously not give a rats about what happens to other women who are either not as fortunate as they are, or simply want to make different choices?

Seriously, it bothers me. Why are these young women lining up to be the new foot soldiers in the global war against women’s rights? Is it just their wide eyed, self centered ignorance that has them taking the hatchet to the feminist cause, or is there something more sinister at play?

If you look at www.dictionary.com the term Feminist is, by definition, a rather inoffensive, innocuous label to apply to ones self; and certainly not one that should be the cause of any hostility, fear or distress.

But given the stampede of young women wishing to distance themselves from the mere idea of feminism, there can be no doubt that the term “feminist” has been co-opted to mean something quite different.

Just as political opportunists, (and a cynical media), have managed to indelibly fuse the word “Muslim” with impressions of terrorists jihadis in our minds; so they have managed to associate feminism with images of ugly, hairy, ranting, irrational lesbians that want nothing more than to kill all men; meanwhile the true meaning of the word has been obscured. Feminism has been successfully rebranded to a point where young women no longer see it as something that may further their cause, but as something that will actively hinder it. Set aside the undeniable human tragedy that is India’s epidemic rates of sexual assault or the enduring practice of bride burning, China’s continued extermination of infant girls, the stoning of women in Afghanistan, the normality of rape in Somalia , the denial of female education in Pakistan, and the human trafficking of 3rd world sex slaves etc etc etc,

Just looking exclusively at how the gender divide plays out for western women, it is difficult to understand how any sane minded person could possibly think that we have reached a position of equality, or for that matter think that feminism is a bad thing.

I don’t know any normal, rational western man that thinks, “I hope my daughter grows up to be paid 20% less than others doing the same job, and gets to pay 20 % more for basic gender targeted items”, or “I hope my daughter gets passed over for promotion, and never gets to fulfill her potential because she is female”, or “I hope she gets stuck in an abusive marriage because she stopped work to look after her kids, and now can’t afford to leave”, or even “I hope she gets raped for wearing that mini skirt”…. No reasonable person thinks like that, and that is why reasonable men and women both recognise the need for feminism.

But clearly there are still forces of resistance. Believe me “the housewives of Australia know, as they are doing the ironing” that they are not adequately represented in the cabinet room of our government. (Those pesky women may be knocking on the door, but clearly the doorman thinks that cabinet is a sub branch of the Melbourne club). And what better way to keep women silent and compliant than to demonize “feminists” (those women who are actively engaged in combating inequality). The mainstream media have expended an inordinate amount of energy cultivating an image of feminists as twisted, antagonistic witches full of bile and vitriol; they have painted such a monstrously grotesque portrait of the modern feminist that we are instinctively repelled by the mere mention of the word. Even less would we want to admit to actually being one! Hell NO!!

But if you read their posts these self professed anti-feminists, are not really anti-feminists so much as they are “pro-male” and “anti-hate”; and the way they express that, (with out any apparent sense of irony), is by declaring their rancorous hatred for all things “feminist”. 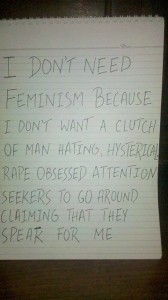 Clearly what these overwhelmingly youthful little memesters fail to understand that they have been hoodwinked by the powers that be, that their naïve good will, and legitimate desire for gender equity has been hijacked; and they are now fully mobilised in a war against their own best interests.

If we can, for a moment, set aside the toxic rhetoric of the marginal feminist radicals, strip away the claptrap about “all feminists being bitches”, and take a sober, rational look what real feminists have actually given us; the right to vote, the right to stand for office, the right to own property, the right to work, the right to an education etc… who could argue that they have not given us a gift of the most profound value? And if you look at what real feminists may give us into the future, things like equal opportunity, equal representation, a pay rise, and a chance to shine on our own merits, what sane person would want less for their daughter or their sister?

While these “Women against Feminism” may be content to cuddle up to the status quo, and bin feminism altogether, I see that there is still much work yet to be done, (particularly in the developing world).

The choice over whether I “need” feminism or not is not now, and nor has it ever been, solely about me. For no matter how good I think I might have it, (in my comfy little western enclave, with my comparatively high level of self determination), there are hundreds of millions of women who unquestionably need our help and solidarity to get to even the most basic level of equality and self determination. And if standing up for what is clearly right means some one might call me a “feminist bitch”, then so be it. Those feminist bitches, with all their sacrifice and struggle have given me most of the things that make my life free and happy!

So I ask you, who needs feminist bitches? I say we all do!