Labor wastes money! We know this. Tony Abbott, Joe Hockey and company have been banging on about Labor wasting money for years.

And today, Joe Hockey will tell us that the budget has blown out from the $30 billion estimated during the election campaign to a whopping $50 billion. That’s, of course, all down to Labor. Well may not, the $8 billion that the Coalition gave to the Reserve Bank. I suspect that won’t come up in the Press Conference.

“It’s blown out by a further $20 billion!” announces Hockey

So the obvious question is: “But isn’t more than half that, the money you gave to the Reserve Bank and the billions of dollars of tax revenue which you’ve decided not to go ahead with?”

Unfortunately, I doubt that one will be asked. I doubt that the press will even ask – if saving money is such a priority – why did Tony Abbott waste money producing a booklet of his first 100 days? If they do, Hockey will immediately say that Kevin Rudd did that too.

You see, that’s politics: Everything Labor did was bad, unless we’re doing it too, in which case it’s perfectly ok, because they did it!

But rather surprisingly, I’m not at all concerned about the recent booklet. I want to re-visit a more important booklet that the Liberals created. The Little Book of Big Labor Waste, where they list 60 areas where Labor had wasted money.

A few months ago, I actually read this booklet and wrote about it in a blog. And it seems to me that Liberals have either forgotten all about it, or are saving the big announcements for their committee of audit. Either way, I don’t think it’s good enough.

For example, where’s the announcement that they’ve stopped this outrageous waste of money! Public servants getting milk! 350 litres to 900 bureaucrats. That’s more than a third of a litre each! If they could just stop this altogether, then we’d the Budget would be a mere $49,999,999,890 (or should that be $49,999,999,999,890. Like Barnaby Joyce, I sometimes get my billions and millions mixed up). 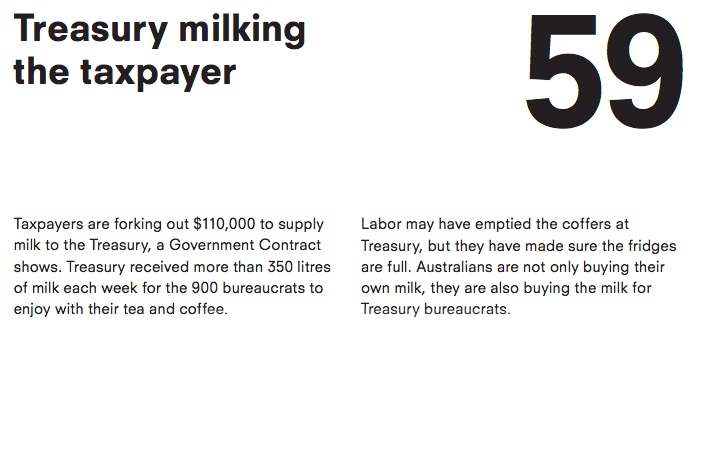 There were a few other concerns, like Labor advertising the “schoolkids bonus” because people weren’t aware that they were entitled to it. A complete waste of money, because the Liberals are scrapping it, so there’s absolutely no need for people to have known about it!

In fairness though, there are some areas where the Liberals have delivered. For example, there were many complaints about money being wasted on research. And as for this one: