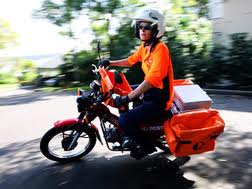 A group of Queenslander Bikies, calling themselves the Posties, have been arrested. Queensland Police raided their Headquarters at Australia Post.

A spokesman for the police said that this was the centre of an enormous distribution network. “We got a tip-off and we’ve been watching them for a while now, we simply had to wait until there was enough of them there.”

Mel Mann, a lawyer for the Posties, claimed that they hadn’t actually commit any crimes. “All they do is deliver mail, which is their job.”

Leanne D. Thol, the Queensland Minister for Explaining Things Simply Enough for Nationals to Understand Them, argued that what they were doing wasn’t the issue. “The legality or otherwise of their activities is irrelevant. The point is that they were dressed in their colours and they were riding motorbikes, and under our laws that’s more than enough reason to hold them without trial.”

When someone at the press conference asked if this was something to do with removing Posties without the need for redundancy pay before Australia Post was sold, Ms. Thol said that that was a ridiculous suggestion, and that she wouldn’t dignify it with a response.

After the questioner pointed out that what she said was, in fact, a response and that she hadn’t actually answered the question, security quickly moved in, realising that there was no way that this could be an actual journalist.