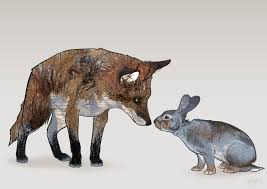 INTERVIEWER For the past three years, the polls have had you as the one expected to take over the Farm, but with the recent change to Kevin Rooster, that’s no longer certain.

MR RABBIT Well, that’s for the animals to decide. I’d rather talk about my plans for the farm once we have the right sort of animals in charge again.

INTERVIEWER And what would those plans be?

MR RABBIT They’re all there in our booklet, “Real Solutions for Imaginary Problems”.

INTERVIEWER But could you outline a few of them? After that’s been one of the criticisms – that you refuse to talk about what you intend to do.

MR RABBIT That’s just more of the negativity coming from Mr Rooster. He was only elected because of the support of the headless hens, you know. Even his some of his own chickens say that he’s impossible to work for.

INTERVIEWER Those same chickens that you’ve been telling us to ignore for the past few years?

MR RABBIT Look, ah, that’s not the issue. The issue is that they refuse to talk policy, they’re just concerned with personalities.

INTERVIEWER Mr Rooster offered to talk policy with you just the other day.

MR RABBIT I’ll talk policy with him when he calls the election.

INTERVIEWER On the matter of policy, will you still be keeping some of Julia Rhode Island Red’s reforms?

MR RABBIT Well, ah, that will depend on… ah, which policies. But we’ll certainly get rid of the tax on animal droppings.

INTERVIEWER So, you don’t have a problem with animals leaving their droppings without cleaning them up.

MR RABBIT Why should we go it alone? I regard this as a restriction on our basic freedom.

INTERVIEWER Some are suggesting that this is because you’re basically not a domestic animal, that you’re really still wild. And that this explains why Rupert Fox is pushing so hard to have you elected. That you’ll allow wild animals like him to run rampart over the farm.

MR RABBIT It’s those like Mr Fox that are providing work for the animals on this farm. If it weren’t for animals like him, we’d all starve.

INTERVIEWER He was particularly critical of crackdown on 457 visas, saying that it was racist and disgusting.

MR RABBIT Yes, why shouldn’t we bring in animals from other farms to do work that the animals here aren’t capable of doing?

INTERVIEWER I’m just wondering how that sits with your strong stance on “stopping the goats”.

MR RABBIT That’s different. The goats are coming in illegally.

INTERVIEWER But wasn’t that the argument with those misusing the 457 visas – that they were doing so illegally?

MR RABBIT Some of these goats threw their kids in the water.

INTERVIEWER I don’t think there’s any evidence of that.

MR RABBIT Calm down. There’s no need to dispute anything I’m saying. They don’t do that over at Fox.

INTERVIEWER Finally, Mr Rabbit what do you see as the main challenges ahead?

MR RABBIT Stopping Mr Bull from launching a challenge to my leadership before the election.

INTERVIEWER I meant for the farm.

MR RABBIT Oh… Ah… Repairing the damage that Kevin and his sheep have done to the barn.

INTERVIEWER Wasn’t that damage done in the storm of 2007.

MR RABBIT Yes, but they haven’t fixed it. None of the other farms have leaky barns.

INTERVIEWER Isn’t that because all the other farms had their barns blown away?

INTERVIEWER That’s all we have time for, Mr Rabbit, thank you.

MR RABBIT Did I mention that we have a booklet?