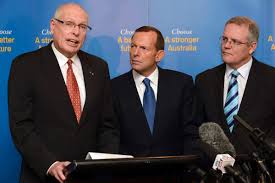 ”I am as happy as a pig in shit – you can quote me on that – doing what I’m doing at the moment.” – Special Envoy Jim Molan.

Has anyone seen Molan, Tony’s personal “troubleshooter” on asylum seekers who promised to convince Indonesia to sign up to the Coalition’s Operation Sovereign Borders policy?

For those of you who don’t recognise the name, he was the tame retired general who was trotted out before the election campaign to assure every news program that would have him on that the tow-back policy would work and that Indonesia would just cop it.

General Molan was instrumental in developing and promoting the Coalition’s Operation Sovereign Borders asylum-seeker policy, under which border protection would come under the command of a three-star military commander. He has been a key player including helping to launch Operation Sovereign Borders when Mr Abbott and his immigration spokesman Scott Morrison announced the policy in July (refer above photo).

General Molan denied he was a Liberal Party activist, as suggested by then Defence Minister Stephen Smith but told the ABC governments should achieve outcomes:

”I find that the people on the other side of Parliament . . . in the Opposition, have experience in doing what I want them to do, that is, secure our borders”.

”They have a greater probability of success and they’re an impressive bunch.”

Emboldened by his acceptance into the fold, Mr Molan penned a few articles. In July he wrote the following piece:

“Defence is not in the public mind as much as borders, but defence and borders are linked by the common failure of the Labor Party in government.

Australians should be quite sure that our Indonesian friends could stop the flow of people through Indonesia to Australia in a relatively short period of time. Commentators or politicians who imply that we are asking something impossible of our nearest big neighbour, are downright wrong. I make this judgement from living in Indonesia for five years and working intimately with the Indonesian security apparatus, and it applies now within a democratic Indonesia.

If the Indonesians achieved half the success in moving against the people smugglers as they have in countering terrorism, then there would be no appreciable problem. Indonesians do not see people smuggling as a significant problem for themselves, and are sensitive because they have tens of thousands of their citizens illegally overseas as workers. Corruption is also part of it with some locals on the take, and the anarchical nature of the Indonesian media means that leaders must not be too close to Australia.

To control our borders, we should not have to rely on the self-interest of our neighbour, but it would be really good if our neighbour assisted us as a friend, as we have assisted them significantly in the past. I have not forgotten our role in East Timor, but the final report of the Indonesian-Timor Leste Commission of Truth and Friendship Indonesia allows Australia to confidently occupy the moral high ground in relation to that issue. If people smuggling is truly a big enough issue, and around 70 per cent of Australians certainly consider it so, then Australia needs to impress on Indonesia the seriousness of the situation, not just go to Indonesia and list people smuggling as an agenda item.

So, if this is a real problem to an Australian government, then what will get our big friend’s attention is Australia’s resolve, part of which is returning the boats to Indonesia in order to totally disrupt the people smugglers’ business. If Australia agrees only to pay for offshore processing in some new Indonesian Galang, we will have signed a blank cheque for Indonesia to cash for as long as it wants, much Australian money will be wasted by inefficiency and corruption, and people smugglers will just move a bit further down the supply chain and once again wait us out, knowing that their customers will finally end up in Australia.

And boats can be turned back. The techniques for doing so should not be discussed openly for the same reason that we do not discuss operational detail in Uruzgan Province in Afghanistan.”

One can only wonder how this missive was received in Indonesia.

At the beginning of August we hear from Molan again:

Retired Major General Jim Molan, an adviser to Opposition Leader Tony Abbott and a former senior soldier, says more money is needed to get the 12 new submarines up and running. Construction will not begin until 2017 at the very earliest, and Maj Gen Molan said it was likely to be 2030 before they’re in the water.

He says Australia needs a decade of increased spending to get to “where we should be”.

Opposition defence spokesman David Johnston reiterated the Coalition policy to draw up a new White Paper within 18 months if they win the election, which would include a new Defence Capability Plan. He said the Government had a history of delaying important projects and that a Coalition Government would see the Future Submarine Project as a “top priority”.

“That’s why we’re redoing the White Paper . . . we are committed to the submarines in SA,” he said.

I wonder how that made Holden feel?

When, lo and behold, Tony Abbott then offered him the role of “Special Envoy” in late August, General Molan denied he had been offered a job for spruiking the policy:

”At no stage did I recommend that there be a regional envoy,” he said. ”At no stage in the derivation of the policy was I ever driven by self-interest. I have been retired [from the army] for five years and I am totally enjoying it. I also make a shed-load of money, so I’m not in this for the money. However, the logic of doing it is unchallengeable.

”I am as happy as a pig in shit – you can quote me on that – doing what I’m doing at the moment.”

“I have a good understanding of the region . . . and I have many friends up there. I will be the troubleshooter, I will be the fixer. Technically I have been directed to facilitate regional co-operation. That is the political speak . . . what it means is I will be concentrating on a number of countries to make sure we have a regional deterrence framework. The vast majority of the solving can be done internally in Indonesia and they want to solve it. People smuggling is against their domestic law. And there is a kit bag of tools that we can use to make this work.”

“I’ve been retired for five years, I have lived in fear of being offered a job I would want to take . . . and now it has come. This is a job we in the military can do well. And it is critical we get it right.”

Is it just me, or is he showing an unhealthy enthusiasm to have gunboats to play with again? Most people who deal with asylum seekers are traumatised by the encounter rather than “happy as a pig in shit”.

He was the chief of operations of the allied forces in Iraq with responsibility for the operations in Fallujah. Faith in military solutions convinced Molan that George Bush’s troop surge in Iraq delivered “victory” to the Western occupiers, a reasonable judgement if victory is defined as the destruction of the country and the immiseration of its population. If you claim to have run the war in Iraq, it may be necessary to believe this nonsense. By almost any measure, the war in Iraq has been one of the greatest military catastrophes of modern history.

In 2009 he recommended in articles in The Interpreter and in the Australian Army Journal to send a further 6000 Australian troops to Afghanistan for up to 5 years. Despite growing public opposition to sending more troops (65% of Australians were opposed) and a failure to subdue the Taliban since we first attacked them in October 2001, Molan still believed a military victory in Afghanistan was “a fair probability,” even if he could neither define it nor explain why the course of the war would suddenly change with additional foreign troops.

In language borrowed from the Bush Administration, Molan claimed “our enemies play on our morality and exploit our goodness,” blaming the waning ‘popular’ support for the war for exposing “our greatest vulnerability, our resolve.”

Finally, in a paragraph about the mismanagement of the war and corruption in Kabul, Molan blames NATO, a “poor constitution,” and “Hamid Karzai’s natural Afghan ways . . . ” What is he suggesting here? That Afghans are naturally corrupt and untrustworthy, hence our failure to ‘win’ the war? There is no other interpretation of these extraordinary and unfortunate remarks.

Scott Burchill, in a scathing assessment of Molan, said “it would be surprising for military men to advocate political solutions to global conflicts. It’s not their area of professional expertise. By default they lead with their strongest suit – organised violence – not geopolitics or diplomacy.”

The Coalition has budgeted $1.1 million for the role of Special Envoy over two years. Why is the person who designed the asylum seeker policy, and who is supposedly the “fixer”, the man who has “friends in high places” and who has been flying around at our expense visiting them – why is he not at the weekly briefings instead of that poor benighted General Campbell?