In the argument for investment in renewable energy in Australia, the existence, or non-existence of climate change is irrelevant, writes Warwick O’Neill.

Tony Abbott, Joe Hockey and the rest of this chamber of horrors masquerading as a Government are the ones who need convincing. But while I think that deep down the majority of them probably do believe the science, they all believe much more in the money flowing into Liberal Party coffers from the likes of Gina, Rupert, and other esteemed members of the IPA. So do we continue doing things the way that we have been ever since these people stole the election, i.e. pleading to their conscience and their desire to leave a clean and sustainable future for our grand kids? Like that’s ever going to work.

As they say, the epitome of stupidity is to continue doing the same thing, in the same way and expecting a different result. We need to stop trying to bash down the front door. We need to stop appealing to their conscience and instead use their enormous egos and greed against them. Let’s stop trying to convince them that climate change is real, and start talking about the only things they care about; economics and legacy.

These people may be able to stick their head in the sand and deny climate change, but there are two unmistakable and unarguable truths which no amount of sand can cover up.

First undeniable truth – our mining resources will run out eventually. Whether it’s in ten years, fifty years or one hundred years, unless their God can miraculously replenish our stocks, we will run out. This will leave Australia with very little to trade and the rest of the world will be quite happy to say “thank you for your contribution to our future” while they wave us goodbye.

Even a government which passes the one collective brain cell around to whoever needs it most can see that this will be an economic disaster. How to avoid it though? By finding another source of income, something else which we can sell to an eager world. It would be hard to argue that Australia, due to its geography, isn’t ideally placed to take advantage of renewable energy production. Heavy investment in this industry could potentially reap enormous financial benefits to Australia. Yes, I know it would buck the trend to have a government in Australia that actually invests in assets rather than selling them off, but humour me.

We all know that solar is a viable source of energy. If solar panels the size of an average house roof can provide sufficient power to run that house, imagine the power output of a 1000 acre solar panel. A few of these strategically positioned and we go a long way towards providing enough power to keep this country ‘rocking and rolling’. Government investment in training could help alleviate the job losses from the mining sector, and these new solar areas could be the future version of today’s “mining towns”. 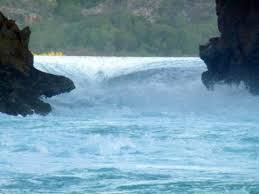 Our other advantage is our fifty odd thousand kilometres of coastline. Each inch of this coastline is subject to the one of the truly dependable and predictable sources of energy on this planet – tides. Tidal energy doesn’t dissipate under an overcast sky or when the wind stops blowing. Some areas, such as the “Horizontal Waterfalls” near Broome, have such huge tidal flows that you could imagine, with the right technology in place, potentially provide enough electricity generation to supply the entire top end. And this happens twice a day, every day. But is going largely untapped due to lack of investment.

If any Government properly invested in the research and development and then implemented these technologies, then solar and tidal power could see Australia in a position to provide clean energy at least to the South East Asian region. Our scientists (should we have any left) could no doubt devise efficient and environmentally friendly ways of harnessing this power. The sale of the electricity produced, combined with the manufacture and export of our intellectual property could bring billions of overseas dollars into our economy, easily paying off the initial investment and then adding pure profit well into the future.

The second undeniable truth is that no matter how strenuously Tony Abbott fights against renewal energy, most of the rest of the world, even China, is already making great strides in establishing their own sustainable energy industries. This can mean only one thing for the Australian coal industry – a decrease in the price of coal. The less demand there is, the less it is worth. Economics 1 0 1. So long before coal resources run out, they’re going to be worthless anyway. Failure to start investing now will only mean that the rest of the world will be so much further in front of us when the time comes and we have no other option.

That takes care of the economic angle of attack; now let’s stroke their egos by dangling the carrot of legacy in front of them. Two things any politician who strives for the top echelons of government have in common is a massive ego and a desire to be remembered as one of the giants in history.

Point out to Tony Abbott that he could go down in the annuls of history as the visionary who set up Australia’s economic position in the world for centuries to come, and his ego is sure to be soothed. Actually scrap that. As the “suppository of knowledge” he’d probably think that he’ll be going down in the annals of history as the intellectual giant who scrapped the ‘carbon tax’. Sharp as a marble, our Tony.

But pitch the legacy idea to whoever will be the leader of the LNP once they rid themselves of Tony, and I’m sure they’ll show some interest. Maybe the thought of a gilded statue out the front of Parliament House, honouring their greatness would be enough to overcome the natural desire of most pollies to only look as far ahead as the next election.

Take the whole climate change debate out of the renewable energy argument, and all they are left arguing against is a stronger future economy and their place in history. We could very well get what we wanted in the first place, which is investment in sustainable energy and a brighter, cleaner future. Any military strategist will tell you, if your initial frontal assault fails, change your plan and take them in the flank, where they least expect it.