There are times that I repeat myself. That’s right, I repeat myself. I suspect politicians do it, in order to give them time to think, but I do it because, sometimes, it seems that people weren’t paying attention!

Now, I don’t think I’m always right. In fact, just the other day I conceded to my wife that she may have been correct about a disagreement we had just last 2002. After I’ve had time to think, I can usually see that another’s point of view is valid, and, sometimes, I can even see that I was wrong.

Yes, I did think that there could be a job for me, translating Barnaby Joyce’s speeches into English. But I was eventually convinced that there was no demand for it. From either side of politics. And true, I did say that Tony Abbott would never be PM because Australia doesn’t have that many people who actually read newspapers, so it didn’t matter how many times the Murdoch Media mashed up photos of the Labor Party in Nazi uniforms, many of their readership would mistake that for an endorsement. And, of course, my idea for a pop-up umbrella that covered your Hills Hoist at the first drop of rain failed to attract any interest from any of the people I sent it to.

But sometimes, I’m right. Actually quite often, because generally, I don’t assert that I’m sure unless I’m absolutely positive. If someone asserts that Captain Cook was a Quaker, I may ask if they’re sure, before running away to check the facts, but were they were to assert that he was, in fact, a camel, I feel that I’m on solid ground when I tell them that they probably should consult their history books. This, of course, doesn’t always work, owing to the reasonable proposition that history books are full of inaccuracies and often written by the victors. However, while there may be some inaccuracies, this doesn’t mean that one can assert, for example, that Prince Albert was definitely Jack the Ripper and Queen Victoria was the daughter of Thomas Edison.

All this is a rather round about way of apologising for repeating a couple of things I said in blogs several months ago. The first relates to the way people’s brains work.

People are naturally agreeable. (Apart from on the Internet where Godwin’s Law applies!) But it’s rather surprising to discover how much the desire to be agreeable – or at least not look stupid – can influence perception.

In an experiment, a group of people were shown the following and ask which of the three lines: A, B or C was the same length as the one of the left. 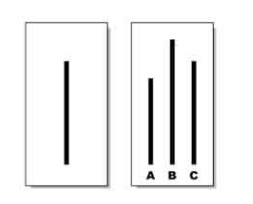 Clearly A, right? Well, actually it’s C. The thing was that only one of the group was the subject of the experiment; the rest were actors who gave the clearly wrong answer. Interestingly, about a third of the subjects went along with the rest of the group. Asch’s experiment is one of the more famous psychological experiments, and from time to time, I’ve wondered whether this is the Liberal Party’s strategy in government. “Look, the Budget’s in a much better position now than it was a year ago, apart from the fact that it’s blown out by several billion dollars. If we just ignore the fall in revenue and the spending cuts which haven’t passed the Senate, we’d be right where we said we’d be!”

Anyway, the next time somebody tells you that you should be out doing something instead of just talking about it, you can point out that countering clear wrong assertions with another opinion at the very least, encourages people to think for themselves.

The second point I’d like to make is about Double Dissolutions, the Blocking of Supply and the Governor General sacking the elected government of the day. I could go on and on about the technicalities of these things, but they’re easy enough to find with a simple internet search, and, if you look up the rules and requirements, conventions and history, you can conclude that not only is Captain Cook not a camel, but that the Governor General is not going to sack the Prime Minister while he commands a majority on the floor in the House Of Representatives. Secondly, it becomes pretty obvious that after the events of 1975, Labor is not going to block supply without seeming like hypocrites. Thirdly, if Labor were to decide to block supply, there’d be little likelihood of support from enough Senators to make it effective and the LNP, the right wing media and the conservative media would attack them mercilessly for their disregard for convention.

And, of course, while I agree that Tony Abbott is responsible for some terrible damage, I have to look at it objectively. If I argue that he should be sacked because he broke promises and is doing things I disagree with, am I any different from the right-wing types who called for Julia Gillard’s sacking over the Carbon Tax and the “dysfunctional government”? (No, I think they were wrong so don’t tell me about the “changed circumstances” or the full quote – that’s my point. People shouldn’t be calling for an unelected appointee to sack a democratically elected government just because they think it’s the “worst government in Australia’s history”, or all future governors-general will be party hacks who’d need to be replaced with each incoming government.)

Finally, why do I wish that I’d voted for Tony Abbott? Well, just so, when some troll attacks me as a Labor Party stooge – which I’m not, by the way – I could say, “Look, I voted Liberal because they promised that they’d stop the waste, not spend $1100 on dinners in London for four people, where they drank over four bottles of wine plus champagne! How excessive is that? Was it one each or did someone get really sloshed?”

And, of course, it’d be one vote that I’d be sure he isn’t getting next election.