The arrival of the New Year is an appropriate time to check the prospects for greater stability across the Middle East Region. The strength of the Morrison Government’s strategic ties with Israel adds an added layer to Middle East politics with the opening of Australia’s Defence and Trade Office at 20 King George Street, Jerusalem.

New layers have been added to strategic ties between the US and Israel since President Trump lost office on 3 November 2020.

The evolving game plan seems to offer a shared hegemony between Israel, Egypt and Saudi Arabia over the Middle East Region. Including Turkey in the game plan at the last minute is still a fond hope. This inclusion could be sold to the world by President Biden as a recipe for change from old conflicts.

In the meantime, the US Congressional Research Service (16 November 2020) has updated the extent of foreign military aid by the US to Israel. This surpasses any other theatre of military assistance. Israel has a network of new age missile equipped fighter planes, stealth bombers and elaborate missile defence systems. The Middle East Eye (15 June 2020) adds the weapons of mass destruction which are not on Australia’s current shopping list:

Israel may have increased its nuclear stockpile from 80 warheads in 2019 to 90 in 2020, according to a new report by a leading global arms watchdog.

The Stockholm International Peace Research Institute (Sipri) said in its annual report on Monday that Israel, one of the world’s nine nuclear powers, could be in possession of up to 90 nuclear warheads.

The watchdog said that the true number could be higher as Israel does not officially comment on its nuclear capabilities.

“There is significant uncertainty about the size of Israel’s nuclear arsenal and its warhead capabilities,” it said.

“Israel continues to maintain its long-standing policy of nuclear opacity: it neither officially confirms nor denies that it possesses nuclear weapons.”

Israel is one of only three countries, along with India and Pakistan, not to sign the 1968 non-proliferation treaty (NPT), and is widely assumed to have the Middle East’s only atomic arsenal.

“It is possible that some of Israel’s F-15 aircraft may also serve a nuclear strike role, but this is unconfirmed,” Sipri said.

The report also said that the locations of the storage sites for Israel’s warheads, “which are thought to be stored partially unassembled,” are also unknown.

Declassified government documents from both Israel and the United States indicate that Israel began building a stockpile of nuclear weapons in the early 1960s, likely with the assistance of the US, Sipri said.

Israel’s own breaches with security protocols within the US Global Alliance are also conveniently overlooked by apologists for Israel.

Just recently, there was a high profile meet and greet at Ben Gurion Airport for ex-US Navy analyst Jonathan Pollard arrived in Israel after 35 years in prison in the USA for the sale of US intelligence protocols to Israel (Times of Israel 30 December 2020).

However, Israel’s insider status within the US Global Alliance soon excuses such breaches of protocol and this has contributed to the contemporary state of geopolitics across the Middle East Region.

Israel wants to reinforce this privileged influence by new strategic tries with neoconservative Arab countries from Morocco to Saudi Arabia. With a nod from Israel and leaders in the Biden Administration, Turkey is keen to support the new diplomacy with overtures to key sources of strategic tensions such as Russia. President Trump team has even offered financial incentives to Indonesia to establish last-minute diplomatic ties with Israel through new assistance from the US International Development Finance Corporation (Times of Israel 23 December 2020).

The pro-NATO Atlantic Council has offered an update on the current security situation in Syria (5 November 2020): The reopening of key roadways between Iraq and the Syrian coast probably assisted in giving momentum from Iraq for a new focus on development in besieged Syria which is a logical outlet for oil and gas exports from both countries and even from Iran.

Search for new allies is also a positive Israeli initiative for Israel’s strategic stability. Overreaching with the sectional Israeli-Arab accord invites avoidable future conflicts across the region. Some softeners are always needed.

A federated Iraq offers a homeland to those Kurds who choose to leave both Turkey and Syria. The idea is popular in Israel which offered support to the Kurds during Saddam Hussein’s years.

This support for the Kurds in Iraq is good news for the Turkish government with its long standing-separatist problem from the Turkish Workers’ Party. However, the grim statistics from Syria are also sources of instability.

The flight of millions from Syria to Turkey, Iraq, Jordan and countries across Europe is embedded in the continuation of Syria’s economic malaise. US sanctions on Syria’s allies in Iran and Russia are not assisting the partial recovery which was apparent in 2019 from the most recent data available from the UN development agency, UNCTAD.

Sanctions against Syria have eliminated major capital investment flows and only personal remittances to families at home and assistance from NGOs remain in the latest UNCTAD data.

Even minor initiatives in Syria during 2020 were not enough to turn around the economic malaise imposed by international isolation.

The approach of New Year brought an ISIL attack on a passenger bus in Homs province which killed 28 civilians (Times of Israel 31 December 2020). 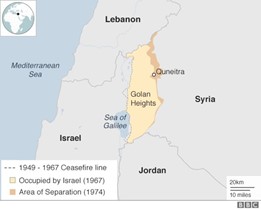 Southern Syria is also under siege from Israeli militia units in the Golan Heights. True to form, Israeli missile attacks were reported in Syria to counter support offered by Iranian militias to the Assad Government near Masyaf (Syrian Observatory for Human Rights 25 December 2020).

The Golan Heights is on the disputed frontier between Israel and Syria as shown by the BBC News map. Retaining this territory is unlikely to be achieved by decades of Israeli control since the 1967 ceasefire in the regional Arab-Israeli war.

Once the highest mountain on the border of Lebanon and Syria, Mount Hermon (2,814 metres in elevation) is now a popular snowfield for Israelis beyond the 1967 DMZ line left by the Arab Israeli war.

Real estate projects abound on the eastern side of the Sea of Galilee in former Syrian territory (Times of Israel, 14 June 2020):

An Israeli cabinet minister on Sunday said the government approved plans to build a new village on the Golan Heights named after US President Donald Trump.

Settlements Minister Tzipi Hotovely wrote on Facebook that her ministry will start preparations for Ramat Trump — Hebrew for “Trump Heights” — to house 300 families. Image: Land of the Bible-Israeli Tourism

Amidst this real estate hype, BBC News (16 June 2019) noted the presence of Israeli Prime Minister Benjamin Netanyahu at the naming ceremony for the Trump Heights subdivision:

At a naming ceremony on Sunday, Mr Netanyahu said Trump Heights honoured Mr Trump for his decision to recognise Israeli sovereignty over the territory.

Building work has yet to begin but a sign bearing Mr Trump’s name and US and Israeli flags was unveiled.

Critics called the move a publicity stunt with no legal authority.

Israel seized the Golan from Syria in the 1967 Middle East war. In March, the US became the first country to recognise Israeli sovereignty over the area since Israel effectively annexed it in 1981.

“This is a historic day,” said Mr Netanyahu, hailing President Trump as “a friend of Israel”.

US Ambassador David Friedman, who attended the ceremony, called the move “well deserved, but much appreciated”.

Despite the presence of these settlements in the Golan Heights, Israel objects to similar annexations by Turkish militias in contested areas in Northern Syria. The competing insurgent mix of militias in Syria is based largely on outside support from Turkey, Kurdish separatists, Saudi Arabia and Israel as the US winds back its presence to the protection of oil fields in North eastern Syria with pipeline links into Iraq.

In the year after most US troops were withdrawn from Northern Syria, there had been anticipations of better times with the arrival of tourism in localities under the control of the Assad government. The historic water wheels were restored at Hama during 2020: Prior to the Syrian Civil War in 2011, tourism was a major source of foreign currency with the arrival of 8.5 million tourists in 2010.

COVID-19 has added to Syria’s domestic woes and to displaced people from a range of conflicts across the Middle East Region (Red Cross Media).

As might be expected, Syria is opting for the Russian-made Sputnik V vaccine (Middle East Monitor, 22 December 2020) as Syria struggles with its own COVID-19 challenges: Pragmatic initiative can be reactivated. Land routes for travel across the Middle East Region are likely to assist in breaking the isolation of Syria. Syria has had success with the restoration of motorways which foster better ties with a more independent Iraq (SANA, 27 December 2020): Such proactive images conceal the continued isolation of Syria when the winter sun could be attracting millions of expatriates and tourists. Time will tell just what happens out of all this Machiavellian intrigue. The latest rocket attacks in Yemen against the arrival of a new Saudi backed Yemeni Government show up the fragility of old-time balance of power diplomacy (SBS 31 December 2020).

Hopefully, the Biden Administration can bring some predictability to US policies for the Middle East Region. Adding a loyalty award for Australia’s loyalty to the US Global Alliance should not be a badge of honour as hoped for by the US Embassy in Canberra, 10 November 2020: A multicultural nation which claims to be now One and Free should be above such partisan diplomatic politics which stoke up the international tensions as covered in the risk and opportunity assessments from the pro-NATO Atlantic Council.