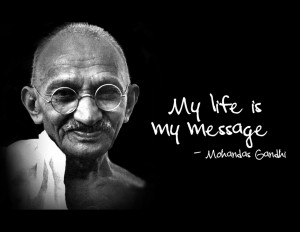 The supreme quality for leadership is unquestionably integrity. Without it, no real success is possible, no matter whether it is on a section gang, a football field, in an army, or in an office.

Whatever ethical plane you hold yourself to, when you are responsible for a team of people, it’s important to raise the bar even higher.

Your team is a reflection of yourself, and if you make honest and ethical behaviour a key value, your team will follow suit.

We have to be able to trust that our leaders are telling us the truth. We have to be sure that they are making decisions for ethical reasons rather than personal gain or the advancement of a few at the expense of the many. We entrust them with our money in the hope they will invest it wisely for the betterment of the individual, the community, the nation, and the world. Not only should they display the highest moral standard, they should expect it from us.

The greatness of a man is not in how much wealth he acquires, but in his integrity and his ability to affect those around him positively.

Wealth for wealth’s sake is a destructive and pointless exercise. Wealth used wisely can improve all mankind and the world they occupy.

We have the resources to eradicate poverty, hunger, inequity, many diseases and other social problems facing the world. But do we have the courage to actually do it? Can we take on the big corporations who waste billions of dollars on advertising while paying their CEOs huge salaries? Can we change the priorities of a society that spends billions on cosmetics and pet food and defence?

It is better to lead from behind and to put others in front, especially when you celebrate victory when nice things occur. You take the front line when there is danger. Then people will appreciate your leadership.

Delegation is an important part of leadership. Recognising your team’s individual skills and providing an environment for them to flourish improves innovation, productivity, satisfaction and achievement. Rather than telling the team what they must do, put the right people in the right jobs and facilitate their success.

Leadership is not about photo shoots, television appearances, or talking to radio shock jocks. It is about getting the best expert advice available. It is about accepting responsibility and stepping in to trouble shoot when required.

Leadership is solving problems. The day soldiers stop bringing you their problems is the day you have stopped leading them. They have either lost confidence that you can help or concluded you do not care. Either case is a failure of leadership.

Communication is a skill that any good leader must possess. Not only to get their message across and convince people that it is the right path, but also to listen to problems and to advice.

Dismissing concerns, or failure to listen to experts, leads to your team giving up. Innovation is stifled, creative problem-solving is lost, as the team become drones fulfilling edicts. Concentrating decision making in an impenetrable small cadre ignores the contribution that could be made if all concerned parties had a voice in finding solutions.

I suppose leadership at one time meant muscles; but today it means getting along with people.

Negotiation and compromise are necessary tools in leadership. Autocracy and unilateral action is no longer acceptable in an interconnected global community where the decisions of one affect many others.

We must identify common goals and be prepared to take co-operative action to achieve them.

Far too much time is wasted by our leaders in blaming each other. Politics has degenerated into gotcha moments, sneering sarcasm, ridiculing and belittling.

We look backwards to shift responsibility, or delight in pointing out current slip-ups. We are not “Team Australia” with a vision for the future – we are groups of kids throwing rocks at each other

Australia is “under new management” whose goals are to stop action on climate change, undermine environmental protection, forego revenue from the mining boom, cut government spending by reining in welfare, health and education, give tax cuts to businesses and amnesty to wealthy tax avoiders, lock up asylum seekers in inhumane conditions indefinitely, to cut superannuation for workers, and to stop us from all being connected to a fast NBN.

They said they would do it. Does that make it right?

If your actions inspire others to dream more, learn more, do more and become more, you are a leader.

Leaders should be inspirational. They should make us believe in ourselves, encourage us to try, and provide the opportunity for us all to be the best we can be. They should offer hope for everyone because when hope is gone, so is life.

Every one of us can be a leader in this regard by treating the people around you with respect and decency, recognising the worth of all people and that, given the right circumstances, we all have a contribution to make. Protect the vulnerable and help those who need it.

Live so that when your children think of fairness, caring, and integrity, they think of you.

When our leaders have lost their way, when they have lost the courage and vision to do what is right for the future, when personal power has replaced public service, the people must show the way and lead them back using a moral compass and a light in the dark.