Should Bill Shorten make it to the Cabinet Room again after 18 May, the incoming government will receive corporate support Labor’s support for investment strategies in both public and private sectors in a weakening Australian and global economy. Strong historical precedents for the final gravitation of the Australian electorate to inspirational Labor leaders like John Curtin in 1943, Bob Hawke in 1983 and from Paul Keating a decade later in that Sweetest Victory of All against a 15 per cent rate for the GST.

Within the Shorten Ministry, there will be a high level of financial talent including Chris Bowen as Treasurer, Jim Chalmers as Minister for Finance, Andrew Leigh as Assistant Treasurer and Minister for Trade as well as Ed Husic in Digital Economy. Ed Husic represents the safe Labor seat of Chifley in the crucial Western Sydney Heartland which recorded an 8 per cent swing to Labor in the 2016 federal election.

Retaining the marginal Labor seats of Lindsay and Reid and winning Banks, Gilmore and Robertson from the federal LNP are vital end-games in Election 2019 as shown by the plateauing out in the trend-lines of the latest tight Newspoll (The Australian Online 13 May 2019): Translating these results to marginal seats like the marginal Labor seats of Bass and Herbert or the federal LNP seats of Leichhardt and Corangamite is beyond the capacity of electoral intelligence from the current Newspoll.

Campaigning this week in a dozen or more marginal seats will fine-tune the electoral outcomes in a series of local referenda on economic confidence in the two mainstream parties as preferences are allocated by voters from the minor parties and the re-emergent United Australia Party (UAP) being promoted by Clive Palmer. There will be real surprises in a number of marginal seats which have not had a high profile in reporting on the national campaign.

Barrie Cassidy’s interview on the Insiders (12 May 2019) provided Bill Shorten with an opportunity to offer re-assurances about Labor’s Economic Trifecta with its commitment to reverse unpopular cuts to service delivery by the federal LNP, initiating fairer tax breaks and promising larger surpluses. A video of the Insiders Programme is available.

It is the detailed interview with Bill Shorten which provides the best insights into Labor’s economic agenda for the final days of the national campaign.

Australia’s two trillion-dollar national economy as measured in Purchasing Power Parity (PPP) is almost half the size of either France or the UK. Here lack-lustre investment trends have been associated with weak economic growth rates during BREXIT negotiations. The weak capacity of trending investment extends to the Australian private sector.

Australia’s trending investment sector is not assisted by the Trump Administration’s Trade and Investment Disputes with China. As at the G20 Forum in Buenos Aires, China was prepared to make concessions of additional purchases from the USA.

Hopefully, the recent reverses on global markets are merely examples of temporary volatility which have already recovered from a bad correction in Mid-November just prior to the meeting between President Trump and President Xi at the G20 Forum. Yahoo shows the Dow Jones trendlines since 7 May 2018: 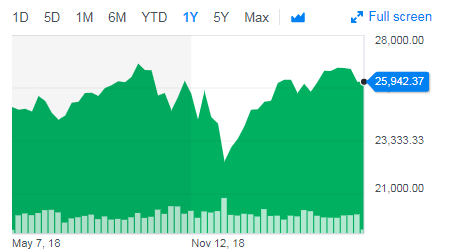 Back to Business as Usual for Australia?

Our advantage is Australia’s proximity to economic powerhouses like Indonesia. Indonesia will have the third most populous Asian nation by 2050. Indonesia is the world’s seventh largest economy if measured in PPP terms compared with Australia’s 19th position. It strongly embraces China’s Belt and Road (BRI) Investment Initiatives which are acclaimed across the Asian continent and beyond.

Indonesia is now a major global investment hub as shown by the data from CEIC Online: Comparative data for Australia from the same source as measured in US dollars is far less healthy than the rosy picture offered by the federal LNP. Government spending and temporary federal deficits during the GFC era in Australia during the Rudd-Gillard years (2007-13) saved Australia from its gravest economic challenge since the 1930s. The federal LNP was handed an economy with healthy rates of capital expenditure in both the public and private sectors. This was replaced by an ideological perspective on economic management with unimpressive results during the past year to January 2019: Emergent Impact of the Trump Factor in Australia’s Financial Relations

While elites in the federal LNP will never criticize president Trump’s America First Strategies, the Post-Obama era is full of new economic hazards for Australia as a middle-sized economy with a pivotal consensus-building financial role in the Indo-Pacific Basin.

IMF Data from the World Economic Outlook (April 2019) shows the extent of the difficulties imposed by the Trump Administration’s America First Strategies on investment flows to rival developed economies from Australia and New Zealand to the most successful European economies like Germany and Denmark: As global capital flows tighten, it is the low-cost emerging economies and the US itself which benefit most from the Trump Administration’s return to corporate-led development models.

To Australia’s north, countries from PNG to Indonesia and beyond are largely ignoring the Trump Administration’s directives about trade and investment ties with China which is the hub of a commercial outreach to most countries regardless of their ideological orientation. This includes Japan, South Korea, Taiwan and Russia plus the Silk Road countries as far as the Middle East and Continental Europe.

The Strait Times Online (6 December 2018) offers its own assessment of the advantages of BRI projects for Indonesia:

JAKARTA • Indonesia is offering new projects worth up to US$60 billion (S$82 billion) to Chinese investors in a bid to capitalise on Beijing’s Belt and Road Initiative (BRI), a senior official has said, despite growing concern over the strings attached to some of the loans.

Despite Indonesia’s strategic location, South-east Asia’s largest economy has not been among the biggest beneficiaries of China’s trillion-dollar push to create a modern-day Silk Road.

Its best-known BRI project is a US$6 billion railway linking the capital city of Jakarta to the textile hub of Bandung, which has faced land procurement problems.

However, Jakarta has been in “structural communication” with Beijing since last year on possible infrastructure projects worth a combined US$50 billion to US$60 billion, said Mr Ridwan Djamaluddin, the deputy for infrastructure at Indonesia’s Coordinating Ministry for Maritime Affairs.

Indonesia has proposed potential projects across the archipelago, while Chinese officials and experts have toured regional governments in search of projects to fund, he told Reuters in an interview.

The PNG Prime Minister has just issued a glowing report of his country’s participation in the recent BRI Forum in Beijing (Xinhua Online 30 April 2019):

O’Neill described the BRI as being impressively broad in scale and potentially a huge benefit for all those involved, according to PNG media outlet The National.

“This is a big market and through better transport systems and supply chains, it offers great opportunities for our food producers and other small and medium enterprises,” the prime minister was quoted as saying.

O’Neill explained that the initiative relies not just on hard infrastructures such as roads, bridges and airports but also soft infrastructure, like “logistics, technical capacity building, skills sharing, access to finance markets at concessional rates and cultural exchange through education and tourism.”

He described these as creating advantages for PNG in the coming digital economy which holds exciting advancements in the realms of artificial intelligence, technologies, automation and financial technology.

Who is Best Equipped to Manage the Australian Economy of the Future?

Although preferences from minor right-wing parties including Clive Palmer’s UAP may still be the spanners in the works against a change of government on 18 May, financial markets usually find a way of outsmarting negative political interference and are probably welcoming the arrival of Bill Shorten at the Lodge because Labor is open to fresh approaches for management of the economy of the future.

Fortunately, the Reserve Bank (RBA) acted wisely to keep interest rates on-hold on 7 May when the current state of the Trade and Investment Dispute between the US and China was still in a dangerous phase. MarketWatch Online (10 May 2019) shows the stabilising effects of the RBA decisions on the value of the Aussie Dollar relative to the Greenback over the past year:

MarketWatch gave an early warning of this situation on 30 January 2019.

In contrast to the national campaign against Labor’s economic policies, it is the ideological rejection of more Chinese investment flows which should be receiving prime attention as a threat to the national economy.

Australian financial markets must surely want Australian leaders to break out of the Colonial Cringe as recommended a generation ago by Paul Keating to embrace the most dynamic and least restrictive economies in the Indo-Pacific Basin.

Australia’s economy and regional security are in safe hands under Bill Shorten’s Labor team with a decisive working majority in the House of Representatives to control the impact of an interfering senate that is ruled from the crossbench by flamboyant populist leaders as in 2010.