Surely when Alan Jones, one of Prime Minister Tony Abbott’s most fervent supporters, gives him a grilling on radio, it is time to say enough is enough. For whatever reason the talkback radio host found it necessary to take Abbott to task on the issue of the free trade agreement with China, it was enough to ask: if his friends are unhappy, isn’t it time someone tapped him on the shoulder?

On Insiders Sunday November 15th, Malcolm Farr summed up his thoughts: “Tony Abbott is a man who should not be left alone with his own mouth.” The comment was made in reference to Abbott’s opening remarks to the leaders of the G20 on the weekend about the $7 GP co-payment, the carbon tax and stopping the boats.

It was that, and Abbott’s attempts to exclude climate change from the G20 agenda that made him look foolish. Laura Tingle said it well enough in the Australian Financial Review. “Unfortunately for our Prime Minister, however, Barack Obama has delivered a rather humiliating exercise in power politics over the weekend: showing how leadership and power lies in setting and controlling an agenda.” If Abbott ever had a golden moment to look every inch the statesman, it was the G20. He blew it in breathtaking fashion. Surely there must be a point where the collective mental health of the nation takes precedence over the choice of a national leader. How much more are we expected to endure?

If ever a supportive media had the chance to make him look worldly, it was at the G20, but even they could not do it. We saw him, warts and all, make an idiot of all those who voted for him and have the rest of us reaching for the Prozac. Then, on Monday night at a dinner to host the Chinese president, he confused China with Tasmania.

The thought of having to endure another two years watching this man stumble from one gaffe to another while continuing to lead our country, is asking too much. We deserve better. Whatever misgivings people may have had about Kevin Rudd or Julia Gillard, surely those misgivings must pale into insignificance when placed alongside the recurring examples of ineptitude displayed by this man.

For a moment, let us look beyond the sheer dishonesty that is the trail of broken promises. As unfair as they are, as economically unsound and unlikely to work as they are, his government would not be the first to play that card. Let us look beyond the appalling treatment of asylum seekers, a policy decision based solely on the belief that it gave his party an electoral advantage.

Let us look beyond his extraordinary approach to the issue of climate change. Let us put some of his utterly stupid remarks about coal to one side for the time being. Let us look beyond the possibility that he is, and has been, ineligible to stand for parliament in the first place, because of Section 44 of the Constitution which prohibits those holding dual citizenship from being candidates.

These are all issues we can debate but which are overshadowed by another. The question all LNP members of parliament should be asking is: does this man demonstrate the qualities and mental capacity necessary to lead the nation, or is he simply a figurehead, a puppet attached to, and dangled by, other more powerful interests who take advantage of his inability to articulate a coherent narrative? 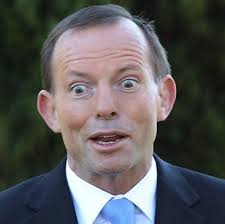 When one addresses that question and places all his bizarre comments, his misguided sense of equality, his inability to express an original thought, surely they must scratch their heads and wonder: is he the best they have to offer?

If they cannot nominate an alternative, then they too must all be seen as incompetent and tarred with the same brush.

That then leaves the only alternative: to demand of the Governor General that he be replaced.

It’s not as if he would be the first. As unlikely as that is to happen, however, it is as clear as it is appropriate. If the man himself was willing to put the country ahead of his own personal ambitions, he would step down.

The latest Newspoll would suggest the majority of voters agree.