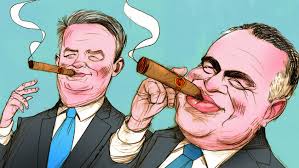 “This decision says something significant about this government. We do not believe in government by chequebook . . . We don’t believe in any normal circumstances that government should be playing favourites between private businesses.”

When Tony Abbott made this statement yesterday I thought to myself hang on . . .

“The Federal Government spends over $10 billion per year on subsidies that encourage the production and use of fossil fuels. About $65 million per electorate or, if you want to make it really personal, $430 per taxpayer each year.”

“Abolishing the private health insurance rebate could save the budget $3 billion a year, dwarfing the savings that would be generated by introducing a $6 fee for GP visits, according to a think tank.

“Professor Kevin Davis says the government’s guarantee of all bank, building society and credit union deposits up to $250,000 is far too generous and is damaging the business of life insurance companies, finance companies and other non-bank financial institutions.

“Prime Minister Tony Abbott has chided Labor for pursuing him over a $16 million grant to Cadbury on the day Qantas announced the axing of 5000 jobs.

Labor asked five questions of the prime minister, quizzing him about the role Alastair Furnival – a former chief of staff to Assistant Health Minister Fiona Nash – played in the decision.

Mr Abbott revealed Mr Furnival was employed by Cadbury as an economist when the coalition announced, as an election promise, funding to assist the company upgrade and reopen the visitors centre at its Hobart chocolate factory.

“Within minutes of Treasurer Joe Hockey declaring an end to ”the age of entitlement” on Monday, assistant Infrastructure Minister Jamie Briggs stood on a highway on the outskirts of Hobart and announced a grant of $3.5 million to a Tasmanian seafoods manufacturer, Huon Aquaculture.

It would help ”provide the equipment to process fresh fish, as well as smokehouses and other machinery for boning, skinning, portioning and mincing”, he said.”

“Australia’s richest woman Gina Rinehart and fellow billionaire Andrew Forrest shared in more than $100,000 worth of taxpayer-funded handouts in their companies under Royalties for Regions last financial year.

“While the WA Government announced last week it was increasing household fees to manage “the state’s finances in difficult times”, in 2011-12 it handed $61,829 for an “innovative drilling” program, to Mr Forrest’s Fortescue Metals Group, which is worth about $10.74 billion.

And though the Government has been demanding “efficiency” cuts from its agencies for the past four years, it gave a further $38,551 from the same program to Hancock Prospecting, whose boss, Mrs Rinehart, was last year reported as earning about $600 a second.

Since 2009, the drilling program, which is part of the royalties’ Exploration Incentive Scheme, has paid more than $9.2 million to resource companies, some worth several hundred million dollars.”

“Ah, but the age of entitlement is over”, we’re told. Unless you happen to be a needy football club, that is. During the election campaign, Abbott promised $5 million to the Brisbane Broncos – owned by Rupert Murdoch’s News Corp, no less – to ”kick-start the revitalisation” of their ”sporting precinct at Red Hill”. The Manly Sea Eagles were offered $10 million to renovate Brookvale Oval, which just happens to be in Abbott’s electorate of Warringah and where he’s the number one ticket holder.”

“Farmers across drought-stricken Queensland and New South Wales are relieved the talk of being tough on handouts hasn’t stopped the Federal Government announcing a multi-million-dollar package of drought assistance.”