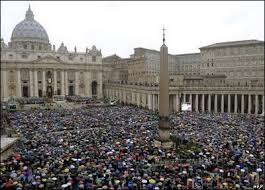 “Thankfully, Australia has emerged from its inauspicious colonial beginnings to become a proud nation, a nation that overcame those primeval prejudices. We have a perfect example: Many of you will remember a day when a Catholic was rare in a Liberal Cabinet.

Those days are now behind us. And Prime Minister Tony Abbott is part of the proof.”

It is time for leaders among the Muslim faithful to step forward and condemn the violence. It would be totally appropriate and appreciated by the world to see a massive show of condemnation of this violence. A symbolic way to show it would be a million Muslim march on Washington DC…

“During a retrospective of Serrano’s work at the NGV in 1997, the then Catholic Archbishop of Melbourne, George Pell, sought an injunction to restrain the National Gallery of Victoria from publicly displaying Piss Christ, which was not granted. Some days later, one patron attempted to remove the work from the gallery wall, and two teenagers later attacked it with a hammer. The director of the NGV cancelled the show, allegedly out of concern for a Rembrandt exhibition that was also on display at the time.”

A couple of weeks ago, I thought of writing this:

“Catholics are a violent lot, and I think that if they want to continue to live in this country, they need abide by our laws.

“For example, in 1997, George Pell condemned an artwork as blasphemous. While I’m a supporter of free speech, I’m concerned that his comments gave encouragement to others to take the law into their own hands and attack it with a hammer. Let me be quite clear here. I’m sure that the majority of Catholics are peaceful, law-abiding citizens. Unfortunately, their silence gives support to the extremists who resort to violence.

“I call on all Catholics to condemn the violence.

“Of course, Catholics do have a history of violence. We have the terrorist bombings by the IRA, and, of course, I believe that it was Guy Fawkes Catholic leanings to lead him to attempt to blow up the houses of Parliament. At no time in his political career have I heard, Tony Abbott condemn either the IRA or Guy Fawkes.”

I wanted to make the point that once you start writing a group that’s part of mainstream Australia such as Catholics the way some people write about Muslims, it sounds absurd. After all, we never demanded that Catholics here condemn the IRA violence. It was just expected that they did.

But then after Rupert Murdoch’s speech, I realised that some people might take me seriously…

In spite of the fact that there have been Catholic Prime Ministers from the Labor Party – most recently, Paul Keating – Murdoch finds it noteworthy to point out that Tony Abbott is a member of that faith. See, he seems to be saying, the Liberals ARE egalitarian – they even have a Catholic in charge. But somehow this need to point it out strikes me showing that Mr Murdoch actually is still clinging to those “primeval prejudices”. What I mean is that one expects that the “first” of any group will often draw comment – the first woman, the first indigenous, the first Jewish, the first Islamic person, the first Queenslander, etc. – but to draw attention to the second Catholic Prime Minister suggests that it’s something that you still find strange and not part of the expected order of things. Or to put it another way, I don’t think I’d bother to comment that we had another Methodist Prime Minister. Or that for the first time this century, the Premier of Victoria didn’t go to a private school. (Actually, when that happens it might be worthy of comment – I should offer a prize for anyone who can name the last time that happened!)

See, says Murdoch, this class war stuff was all nonsense, even the Liberals are letting Catholics in.

Perhaps, I’m being unfair. After all, Rupert also talks about “our country” in his speech. So in spite of his decision to renounce Australia and take out US citizenship – like Peter Allen – he still calls Australia home. He’s still just one of us. And he did find Labor’s attempts to ensure that people coming in on 457 visas were geniune, “racist and disgusting”.

It’s only those “illegals” that we should be calling queue jumpers. Although, I would have thought that a 457 visa that wasn’t geniune was even more illegal.