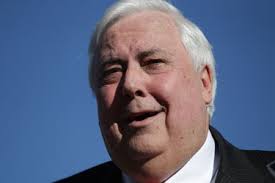 Anyone else wondering if there’s a pattern starting here?

The Government proposes something. Clive creates BIG HEADLINES by suggesting that he’ll block it. There’s a bit of a brouhaha. The Government complains that the Senate shouldn’t block things because after all they have a mandate! (After all, the Liberals have always just waved legislation through – it’s not like they blocked the ETS or anything…)

Now I don’t mean to suggest by that there’s anything untoward in this. After all, it is possible that Clive Palmer just speaks without thinking, and after reflection, he remembers that he is a life member of the Queensland LNP, so really opposing policies he’s always supported just because he’s trying to win a few populist votes is not really a good long term policy. Or it could be that he just likes watching Tony’s face when it looks likely that the Government actually have to say please before it gets its own way.

Whatever, it seems that there are at least two examples of this.

We won’t allow the Carbon Tax repeal, unless it’s replaced by an Emissions Trading Scheme starting at zero. (Haven’t heard much about that lately.)

We won’t support the changes to the regulations on Financial Advice. (Oh, wait the government have promised us that they’ll strength the legislation in the next ninety days.)

There you go. Two things that’s the start of pattern.

All right, two isn’t much of a pattern, but I wanted to get in early. If I wait until it’s an actual pattern then everyone will see it. Like the pattern where Margie doesn’t accompany Abbott when he goes to a foreign country, including Canberra, which Liberals regard as an alien land.

Just like when some of the Liberals suggested that the Labor Party hadn’t delivered a surplus this century. It’s a pattern. The circumstances of the GFC were no excuse – if the Liberals had still been in power, we’d have still had surpluses. And an unemployment rate of “eleventy”, mind you, but things would have been good because we’d have had a surplus.

But that was under Peter “Figjam” Costello. Under Abbott, I’ve noticed a new pattern. Joe Hockey has never delivered a surplus.