Point in case once again, about the redundancy of this COVIDSafe app. Your mobile phone data is shared through Bluetooth with someone you have co-located within 1.5 metres (no further) for a minimum of 15 minutes (no less). In other words, walking the street, brushing shoulders in the supermarket, even a takeaway coffee or 10-minute sit down on the table next to someone else will not register at all. The only thing that protects you is maintaining your physical distance and/or keep moving, don’t gather for more than a few minutes or at all if you can avoid it. Conclusion 1: The app did nothing to protect you, you did!

Now, you get home, wash your hands, gargle with mouthwash before you touch anything – great idea and of course you may have had a mobile hand sanitiser or wipe you used when you got into your car, on or off the train, and no-one coughed or sneezed incessantly over you from the back seat, because they are at home silly – The ones wearing a mask are more worried about you. Gladly you are not suffering from obsessive compulsive disorder, panic attack or suspicious paranoia, just being a good citizen! Several days pass. Now if you have been exposed and caught the virus, incubation 4-7 days, in most cases you are going to experience at least some minor symptoms – Dry cough, runny or blocked nose, sore or irritable throat, and a temperature, which if you are a good citizen you might take routinely once a day in the morning just to be sure – But if it is going to happen, you are going to know, it will happen within 4-7 days of point of contact. If that person (point of contact) got tested sometime later, now that’s a big ‘if’ to start with, you will get a notification also sometime later. Now, given the point of contact + incubation period + reported sometime later (the ‘if’) + ‘more’ sometime later it takes to process and notify, isn’t it likely you already know about it or chances are the incubation period is done and dusted. If you are a good citizen you are already taking precautions, lying low and staying at home. Alas if you relied on the app, it’s too late you have already infected others, those at home and anyone you have come into contact with since. Conclusion 2: The app did nothing to protect you, you did!

Here comes the app’s (great gig in the sky) blessing and it is practically the only possibility I can think of other than being told what to do instead of winging it, and if you are one who wings it, will the app stop you? ‘Not bloody likely’ I hear you say. If you are one of those who are 100% asymptomatic and we don’t think this is as common, may be more likely children (footnote, do you have children in your household?), then the app may be your unlikely (doubtful lucky) warning light. But then consider, you may not even have been infected from that contact, so unless you are going to trot along to a test centre, this is the only scenario you are going to know, but you are a good citizen. Slight sheepish grin breaking, however remember, if you ‘are’ one of those ‘asymptomatics’, I wonder how many of those you came into contact with were also asymptomatic, in which case you are never going to get that notification anyway because they don’t know and have no reason to go and get tested – Conclusion 3: The app did nothing to protect you or your family, by being vigilant and taking responsibility rather than relying on a stupid app, you did!

Now tell me what am I missing?

What is the real purpose of this app?

Why has this been rolled out so disingenuously and politicised?

Why the lies and deception, the value judgements?

Who do you trust?

What’s on the other side other than breaches of privacy, control, collusion, exclusion and surveillance?

Even if the app can help, and I have heard no convincing argument yet, have Morrison and the Liberals earned and do they deserve our trust, shaking hands and bleating like a rabid wolf every day all the way back from Hawaii?

Damn it, just put your sunscreen on, shut up and do it!

Don’t have any problem with going and get tested, although it makes more sense to do a combination of: 1) test if you have symptoms or think you may have been exposed and you don’t need an app to tell you that, you can do it; 2) Target and screen higher risk or vulnerable groups, you don’t need an app for that and this is not its function, health authorities do that; 3) Do some random screen testing in the population, again no app required this is a public health initiative; and 4) Accidental outbreak – contact tracing and indicated testing initiated, usually there are many leads but the app may actually help a little here if all the stars are out, but once again the horse has already bolted; and if you are in touch with the above provisos and safeguards, conclusion 4: You’ve got it covered already, it’s called responsibility, you got it! 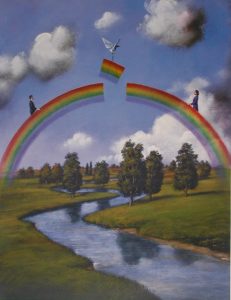 All said and done, I see a trickle of resistant, oppositional, indifferent and incidental cases coming through on the app, but unless you go and get tested, it’s hit and miss, it’s pretty pointless, and in the meantime did you remember to observe physical distancing and wash your hands, because the app can’t do that for you. You might as well go home singing ‘somewhere over the rainbow’ – But guess what?

Morrison and the Liberals, Amazon and the Telcos, police and the State, mainstream media even the ABC (including repetitive nauseating shots of ‘we are one’ when we are not), security services, bouncers and big business are all singing hymns of praise for the digital icon they conned you into, giving up your freedom and privacy, because they don’t think you are bright enough to take responsibility and be a good citizen, only you do! Actually, they just want to make a profit, be elite, stay on the other side.

Who else can you trust but yourself and those around you, because you certainly can’t trust Morrison and the app. That’s not what rainbows are made of, and just an aside, when the ‘snap back’ comes, when everything goes back to the ‘normal’ settings, back to blind economy and rampant neoliberalism, corruption and lies, how long will it take for Morrison and the Liberals to fuck you up once more, and now they’ve got the app out of you – Because their ideology never worked to get you out of this one. This one required a good dose of reason and humanitarian socialism, which they lovingly and uncharacteristically bestowed on us, and it’s now theirs to take away. But we can wish for a little bit of genuine democracy on the other side, with a dose of truth and reason, that might help. And we can wait for the vaccine, but who will immunise us against these politicians, I don’t recall picking them up in a wet market.

Did I download the app? You’re kidding me, right?