On Q&A last Monday, RBA board member Heather Ridout expressed her disappointment at the decision by the voters of Queensland to reject the Newman government’s privatisation plans.

Whether it has been noticed or not, that election result coupled with the recent elections in Victoria and Greece share a common denominator that may have far reaching ramifications for future governments all over the OECD world.

The Victorian and Queensland elections were fought primarily on the issues of infrastructure and privatisation. There were other issues in the background but these two took centre stage for most of their respective campaigns.

If you were to combine these two issues and express them as one broader concern for voters, it is likely that concern would be identified as sentiment; a feeling that selling off assets and allowing private companies to buy public utilities that result in costing users more, wasn’t right.

Austerity has been the catch cry in recent times with governments telling us that our present lifestyle is no longer sustainable. They then encourage the privatisation of public assets as if this somehow benefits us. When politicians look at publicly owned assets, all they see is a pile of money sitting there waiting to be collected. They think if that pile of money can be realised without effecting the service it performs, then why not sell it and spend the money on something that will make them look good.

They then try to sell the idea to the public who are led to believe that this will improve their lives and those of future generations.
But it never seems to work out this way. We have seen public assets pass from our hands into the hands of the already wealthy time and time again, without ever seeing any tangible reward.

Has the sale of Telstra, the Commonwealth Bank and the State Electricity Commission of Victoria, just to name a few improved our quality of life?

Looking at the result of these three elections it is worthwhile asking: Are we seeing a wiser electorate waking up to the hypocrisy peddled about privatisation?

In Greece, a country that has been cheated, lied to and then forced to pay the price of neo-liberal excesses by both their own government and the EU Parliament, the people decided enough was enough.

Again, it was sentiment, a feeling they had been punished enough, if indeed, they should have been punished at all. In all three locations the people judged privatisation, austerity and structural reform to be a smoke screen hiding the real agenda behind these moves.

That is not to say the people’s understanding of the real agenda is crystal clear either. But they do understand that the flow of wealth to the top end of town, at their expense, is real. Public assets are generally always undervalued.

They could clearly see that their living standards were in decline while politicians, developers and corporate giants effused a smug arrogance reminiscent of the Frank Underwood character in “House of Cards”.

They decided in all three cases they weren’t going to take it anymore. It begs the question therefore: Is the public perception of neo-liberal philosophy now clearer and are the people finally beginning to reject it?

Unregulated capitalism has always been at odds with those basic human values that we hold in common; fairness, honesty, sympathy, charity, empathy. The notion that people come before profit, was somehow cast aside when the money train left the station and big capital promised big rewards for all; rewards they never intended to share.

If we can take a lesson from Victoria, Greece and Queensland, it is that big capital will have to re-assess the way it treats its most valuable resource: the people who make it work for them. 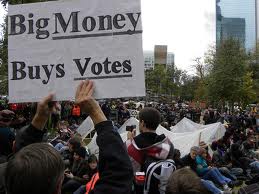 The challenge for the new governments in Australia now, is to explain this to big capital.

But if our local business writers continue to suggest as Adele Ferguson of The Age does that, “With an infrastructure backlog and big budget deficits, we can build the infrastructure we need only by selling assets and attracting private capital”, then there is still a long way to go.

Meanwhile, more governments will fall unexpectedly because they ignored public sentiment in favour of private gain.