Today we begin the countdown to our Top 5 most viewed articles in 2022. Number 5 goes to John Lord for this piece from June (and we’re still asking that question):

Why is Scott Morrison remaining in the Parliament?

The answer to my headline will be revealed a little later, or it may not, depending on how you digest what l am suggesting.

Tony Abbott stayed on after being rolled by Turnbull. Rudd did so when Gillard successfully challenged. Both were motivated by the possibility of regaining power. Abbott didn’t and became a hindrance to Turnbull, but Rudd did and became Prime Minister for a second time.

So, what could be Morrison’s motivation for staying on? Perhaps his ego is telling him to be patient for another opportunity. Maybe he believes God’s will is for him to fulfil his destiny. Maybe there is another reason. Maybe it’s for the money (though I’m not suggesting it is).

In May, the Australian Associated Press fact-check reported that Morrison’s yearly salary was $549,250.

But that was while he was prime minister. But:

As of 2019, the annual base salary of a member of the federal Parliament in Australia is $211,250 per annum. Parliament House, which is what Morrison will receive as long as he stays in Parliament (provided he doesn’t become a shadow minister).

That’s plus expenses which can be very lucrative. (Writing for Yahoo Finance, Eliza Bavin puts it at $300,000 PA.)

“Now, let’s discuss the parliamentary pension for when Morrison finally decided to exit.

If we do some similar maths for Morrison for the time spent as a Minister, Prime Minister and regular MP, the total comes to about $200,000 annually.”

It’s not a lousy superannuation package; whatever way you look at it, think about all the perks that go with it. Free travel, an office with a personal secretary. Labor has promised to have a Royal Commission with terms of reference up and running before Christmas.

But could there be another reason for him staying on? Yes, there could be, and its name is Robodebt.

The Australian (firewalled) described Robodebt as:

“… the worst example of maladministration and callous indifference since the Coalition took office, but the PM won’t be held to account.”

In fact, it’s much worse than that; it is possibly the most callous scheme ever devised by a political party in Australian political history. And further to that, Scott Morrison’s fingerprints are all over it. It has been alleged (repeat, alleged) that Morrison told the department to continue even after being told that the scheme was illegal. 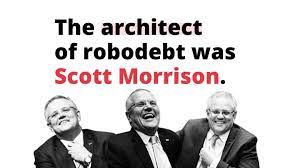 When the unlawful scheme was conceived, Mr Morrison was social services minister and continued the welfare debt recovery program as prime minister and even underpinned a return to surplus on a projected windfall.

And if that were the case, then it would be better in Morrison’s defence to give legal evidence as an MP and former Prime Minister than as a private citizen. There would be protection in doing so in the event that some pro bono work is required at a later date.

The former Government unfailingly did all it could to cover up and obstruct enquiries into the origins of Robodebt and has consistently refused to take responsibility for the damage it caused, including the real possibility that many people committed suicide.

Eventually, after Labor helped instigate a class action, the Government caved in, and a $1.8 billion settlement was made to repay the scheme’s victims. The offer saved Morrison, Roberts and Porter from appearing in the witness box. However, now that we have a Royal Commission. People will have to front up and tell the truth.

Who was responsible for establishing the scheme? Why did the Commonwealth “unlawfully claim nearly $2 billion in debts from 433,000 people?”

“… illegal and immoral Robodebt scheme caused serious harm to many Australian families – who have reported that this contributed to stress, anxiety, financial destitution and even suicide.”

In April of this year, the then Opposition Leader Anthony told the ABC that Robodebt was a “human tragedy.”

“Against all evidence, and all the outcry, the government insisted on using algorithms instead of people to pursue debt-recovery against Australians who, in many cases, had no debt to pay,” Mr Albanese said.

“The problem has been addressed” when asked if the Coalition planned to hold inquiries into the program.

“There have been numerous inquiries into this and there’s been court matters which we’ve fully cooperated in and almost $750 million in response to that,” Mr Morrison said.

“And the changes in the scheme have been in place.

“So the problem has been addressed, but any such inquiry, I imagine, would have to start with the process of income assessment, averaging of income, which was introduced by the Labor Party.”

Why did the Government undertake Robodebt when there were significant questions about its legality? We now know that this was Scott Morrison’s scheme; he was the Social Services Minister at the time of the 2016 election when he proudly boasted it would pump billions into the budget bottom line.

John Howard told Tony Abbott that he would be opening a can of worms with his Pink Batts and Julia Gillard Royal Commissions, and it has turned out that way. There is an immediate call for them at the mere whiff of a scandal, but this is profoundly different. It has the stench of Morrison written all over it.

Robodebt has unnecessarily inflicted unwanted anguish and mental stress on those susceptible to it. We may never know the number of suicides caused by the receipt of automatically generated debt letters, but we need to know the truth. So, the case for a judicial inquiry into this debacle is irresistible. It would be able to examine not only the issue of what was known about the unlawfulness of the scheme but the “human cost” of it, plus the Government’s “use of private debt collectors” to pursue victims.

Do you shape the truth for the sake of a good impression? On the other hand, do you tell the truth even if it may tear down people’s view of you? Alternatively, do you simply use the contrivance of omission and create another lie. I can only conclude that there is always pain in truth, but there is no harm in it.