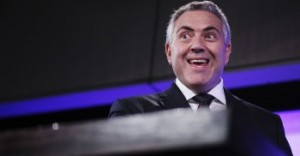 Listening to Joe Hockey, I always find myself conflicted. Part of me believes that he’s as economically ignorant as he sounds, another part of me thinks that he imagines he’s just part of a debating club where he’ll get points for trying to defend the indefencible, and yet another part of me believes things that I can’t say or, like the Fairfax Media, I could be sued by Joe, as part of the Liberal’s demonstration of their support for free speech.

Whatever, I found his interview last night particularly confusing, because I kept swinging wildly between all these possibilities, before remembering that I did once point out that the three were not mutually exclusive.

Labor controls the Senate, he blustered, until Leigh Sales, in that typical way that ABC people sometimes show their bias by bringing up facts – the facts are rarely on the side of the Liberal Party – pointed out that the Labor Party don’t control the Senate. At this point, he qualified it to, Labor and The Greens and the independents control the Senate. This, I thought, is an interesting definition of control. Rather like me suggesting that Mitch Johnson and I have over two hundred test wickets between us, or that Cate Blanchett and I have several academy award nominations. More, in fact, than Joe and Tony and their entire front bench combined.

In actual fact, I think that it would be fair to say that the Liberals, the National, The Greens, PUP and the independents control the Senate, but that sort of defeats the argument that Joe was trying to make.

Something about everything being Labor’s fault…

Including the people we have in charge of the country…

But I particularly liked his logic in arguing for the Medicare co-payment. To sum it up simply it went something like this, I earn a lot of money, Tony Abbott earns a lot of money and it’s absurd that we don’t pay anything when we go to the doctor, and you too, Leigh Sales, because we all know that ABC presenters are overpaid! So if we just make sure that pensioners and the unemployed don’t have to pay any more, then someone who’s working part-time on the minimum wage should also have to pay the say amount as Leigh Sales and Tony and me.

I have a vague memory of Labor suggesting a means test on the private health insurance rebate, which was dismissed as class envy and we were told that people on $150,000 were struggling. But like I said, it’s a vague memory and I seem to feel that it’s been cancelled out by the idea that people on the minimum wage are overpaid…

Now, Joe is always calling for ideas and complaining that Labor Party under Shorten are just negative and never giving him ideas that he can steal, so I have one for him: How about we raise the level of taxation just a little bit on higher income earners, Mm, let’s say, we add one percent on the Medicare Levy for everyone earning more than a backbencher and half a percent for everyone earning more than, say $120,000. Want to get Treasury to model them figures, eh? That should fix rich freeloaders like you leaning on the Public Purse and only paying a “mere” $40 when you stood on your son’s foot or however he broke it!

However, it’s his total lack of an understanding between “lifestyle” and “investment” that makes me stop drinking my chardonnay from the glass and start swallowing it straight from the bottle. While Tony’s turn-it-around Press Club Pontifications praised all those small business owners who’d mortgaged their homes, Joe was still pursuing his mantra that “all debt is baa-d”, in spite ot the fact that many businesses borrow to expand.

Debt can, of course, be bad. And while I don’t wish to make cheap political points and I think the whole negative gearing argument is more complicated than most opponents acknowledge (Two points, Keating tried to abolish it and it lead to a spike in rents, and point two, I have negative geared a property so I have a vested interest in abolishing it because it’s just recently become positively geared so any spike in rents would help a struggling capitalist like myself… Take that, you right wing trolls who try to argue from the point of view of economic illiteracy! I can forgive economic illiteracy from the Left, but when you profess to be Right wing, you’d better make sure that you don’t sound like someone who’s asked to be Tea Party Treasurer, only to discover that nobody wants to pay their dues because nobody owes anybody anything and besides “No Country Ever Taxed It’s Way To Prosperity”!)…

I lost my train of thought. Shit, I will be asked to stand for PUP if I’m not careful. Where was I?

Oh that’s right, if the Liberals are so sure that debt is bad and that we shouldn’t go into debt, I’d like to see Adam Bandt – or anybody really, perhaps even those SA Liberals that feel more than a little bit misled over submarine tenders or whatever the correct term for the way in which Abbott will allow Japanese subs into Australia even though the Diggers fought so hard to keep them out – move a private member’s bill to abolish negative gearing just so grandchildren won’t be born with a debt.

Mm, I can almost hear the argument now. It’s not a debt. Eventually, it’ll be an asset.

Aww, I’m probably just your average Rossleigh, which means I’m one of the few people who’ll ask, given the definition of seismic, how on earth can the PM use the phrase, “a bit seismic”?

Still, Joe has his “full support”…

I’d be willing to bet that most xxx’s in that quote don’t last the year.

Not Your Average Rossleigh.