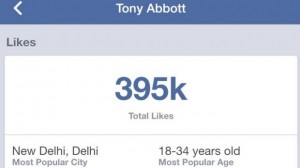 Tony Abbott has spent $4.3 million so far to find out what we think. Apparently future policy decisions will be made dependent on Facebook likes or the number of comments for or against an idea on social media. I would willingly have told him what I think for free so the money could be put to better use.

Wait….isn’t that what we HAVE been doing? Must we really employ market research firms because the government employees that we already pay are too lazy to read? I sure don’t get paid to read their stuff. I do that in my own time, on top of my paid employment. Perhaps we should charge them if they are going to use our blogs since they apparently have millions to throw around for others to read them.

Does that mean that the feral commenters on Larry Pickering’s page will decide how we should treat asylum seekers? Should the people who comment on Andrew “did any of them do a day’s work today, or was it business as usual and welfare on tap” Laming’s page determine welfare policy?

On Twitter you can buy followers — the going rate is $13 per 1,000 new followers. On Facebook brands can pay third party companies called “click farms,” usually populated by people in low-wage nations, who will “like” their public page for pennies a click. In Facebook’s latest financial report to the Securities and Exchange Commission, it revealed that between 5.5 and 11.2 percent of its 1.3 billion accounts were fake.

In August last year we had this.

A campaign spokeswoman later said this was done by “an individual or party, not associated with the Liberal campaign.

News Corp Australia had earlier scrutinised a sample of 100 accounts that had recently followed Mr Abbott. Ninety-nine were questionable. Some had never tweeted. Some had posted in three languages. Others tweeted gobbledygook. Almost all were based in foreign countries.

The only certifiably real account in the sample was Sportsbet.

The Labor campaign spokesman said: “It’s up the Liberal Party to explain the more than 100 per cent increase in Facebook likes for Tony Abbott over the past seven days.”

Is it beyond the realms of possibility that a political party could actually listen to the experts that we pay a lot of money to for their advice? Are we to be at the mercy of bogans and ‘paid by the click’ foreigners? Where is the leadership? Where is the courage to do what is in our best interests? Where is the vision for the future?

Here I was thinking that the greatest threat posed by Facebook was the bullying or seducing of our kids. Little did I know that it was to determine the direction of my whole country.

Since we bloggers are apparently going to have the power to make policy we better make damn sure we are louder than the bogans and more vociferous if not numerous than the fake followers.