Is truth and honesty creeping into politics?

Mid-morning Sunday last, I am watching ABCNews24, as is my wont, and, as also is my wont, my finger is hovering over the “mute” button on the remote just in case any Australian politician or “leading business figure” pops up talking slogans about bullshit billions here and bullshit billions there and gnarling and gnashing their squirrelly pebble gray teeth over what troublesome little bunnies we all are and how much easier it would be to run a country if it weren’t for all the stinking people in it.

My complete disengagement from Australian politics is almost complete.

There is a live-cross to Victorian Premier Daniel Andrews, a man I know nothing about beyond that, because, as far as state politics go, there are six of the goddamn things and a bloody territory, and I couldn’t give a flying poke about any of them with all their backwoods, parochial “my state is better than your state” dribbly bollocks and carrying-on.

Andrews was speaking, favourably, to the subject of “medical marijuana” and as he spoke, I found myself … listening.

He was not reading from notes, of if he was, it was not evident, in fact, he appears to have been speaking “off the cuff”, and using full sentences to boot, and I thought to myself, “You actually sound as if you know what you’re talking about”, because he actually did, and then I think, “That doesn’t happen very often”, because it doesn’t.

He speaks of a boy, a young boy who suffers all manner of dreadful ailments and seizures, and Andrews appears to be acquainted with the actual circumstances of this boys’ life, and he speaks of this boy, of the boys’ parents, and of the ordeals they have endured, and he goes on for a bit about the benefits of this, and the benefits of that, and I listen to it all, something I very rarely do, and when he has finished, I thought, “That was good. That was about a real thing. Good.”

Can it be there may be individuals within this boggy swamp of our fetid body politic who can talk on and about a topic sensibly, and logically, without resort to carnival barker sloganeering and “I’m such a Smug-Bastard” chest-puffery?

Bugger me with a spoon.

The last politician I paid attention to when he had something to say was former Independent MP, Tony Windsor, and before that, Paul Keating.

Does anyone remember Simon Crean?

No. Why would you?

Shortly after Julia Gillard enlisted the support of Windsor and his fellow Independent Rob Oakeshott to form government and inflict her Raging Red Reign of Horror upon the innocently unsuspecting masses of this fair land, Windsor was interviewed on ABC’s “7:30 Report” by then host Kerry O’Brien.

“Jesus Christ! You just answered a question”, I thought to myself at the time. That doesn’t happen very often. Because it doesn’t.

O’Brien too looked a little taken aback, muttered a few “ums” and “ah’s”, shuffled a paper or two, and it was as if he were thinking to himself, “You bastard. I was expecting to have to go another two, three minutes to drag an answer out of you. You’ve screwed my timing.”

When Tony Windsor (Windsor’s interview with Richard Fidler on ABC Radio’s “Conversations” a week or two ago can be downloaded from iTunes, or the ABC site, and I highly recommend you do) says Our Prime Descending Testicle did say he would do anything but sell his arse for the job, and Abbott says he did not, who the #$!&* are you going to be more inclined to listen to and believe, for Christ’s sake?.

If you expect people to listen to you, talk like a person, know what it is you are speaking about, get to the point, answer the questions you are asked, and if you don’t know the answer, and you know you don’t know it, don’t make shit up, because you’ll only end up making yourself look and sound a right twat.

That’s not too much to ask, is it?

You don’t have to be Martin Luther King.

You don’t have to be Billy McMahon either. Or Bill Shorten.

In other news of note I am currently choosing to ignore but others are not, Our Prime Descending Testicle skolled a beer, Julie Bishop wore a scarf, and Malcom Turnbull appeared on the cover of Australian “GQ” looking like an over-eager counter boy from “Wendy’s” circa 1983, and then this popped up … 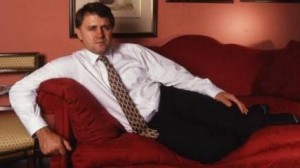 Don’t cry, Baby Jesus, only one nail left to go.

I am going back to sleep now.

Wake me in time for Armageddon.

Ross Sharp blogs on his own site; Smelly Tongues