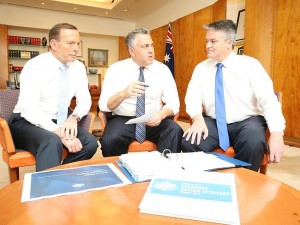 Photo by The Daily Telegraph

If you click on the official Prime Minister of Australia government page the first thing you will read is:

“Over six years, Labor ran up a $667 billion debt on the nation’s credit card.”

Aside from wishing that the Prime Minister of Australia had a more visionary or engaging opening line, it is a bald faced lie and that isn’t a good way to convince people to trust you.

You will be subjected to a rolling slide show of Tony, Joe and Matthias, photographed in various serious looking poses. Is anyone else getting sick of these photos of Tony sitting at tables with people surrounded by lots of booklets and oversize graphs? Is that supposed to convince me that he knows what he is doing? Because he has his photo taking wearing a white lab coat trying to look into a microscope am I to say oh well the $7 co-payment must be a good idea?

But back to the lie.

“Ran” indicates past tense – in fact Tony Abbott specifically states that this happened “over six years”. What he fails to mention is that the figure of $667 billion was a projection for possible debt in ten years’ time from Hockey’s MYEFO report produced last December, and it included increased Coalition spending decisions like the $8.8 billion gift to the RBA and all the interest that will cost us, and the foregone revenue from the carbon and mining taxes, and changed assumptions about future unemployment – in other words it was a political exercise designed to come up with as big a number as they could so they could then justify draconian measures as they claim to be reducing it.

Using the term “nation’s credit card” is purely designed to cause fear. The nation doesn’t have a credit card. In fact we actually print money and can do so if we have to as they have done in the US. Credit cards can get individuals into serious debt and the interest rate is crippling. Using that term makes people think of that rather than a sensible understanding of how government finances work.

While the Coalition continues to peddle this lie I will continue to remind people of the truth because the Australian people have a right to know the real state of our finances. And because nothing pisses me off more than getting lied to about important stuff.

So what is the truth?

The independent pre-election economic and fiscal outlook’s (PEFO) medium term projections, using long-standing methodology, show that on Labor’s policy settings the Budget reaches a modest surplus in 2016-17, surplus grows to 1% of GDP in 2020-21 and net debt returns to zero in 2023-24.

The latest Budget update shows net government debt for 2013-14 of $191.5bn, or 12.1% of Australia’s GDP (not $667 billion Mr Abbott). By contrast, net government debt in advanced economies around the world averages 74.7%, according to the International Monetary Fund.

Gross debt in 2023‑24 is projected to be $389 billion with surpluses projected to build to over one per cent of GDP by 2024-25. There are no surpluses predicted over the forward estimates, there is a higher debt, and surplus of 1% 4 years later than predicted by PEFO using Labor policies.

The claim that Labor left “fiscal time bombs” and secret cuts and spending is another blatant lie. In the 2013-14 Budget, Labor took the unprecedented step of releasing 10 year figures for the National Disability Insurance Scheme and Gonski school reforms, demonstrating how they were funded over the long term. Those figures, as well as the efficiency dividends on the public service, were there for all to see. The fact is that Tony’s election promises were made knowing this but, as we saw, working out how to pay for his promises was not on his mind.

Australia is one of only 10 economies in the world with AAA ratings from all three agencies – in the company of other countries with strong public finances like Germany, Canada, Sweden, Singapore and Switzerland. This status shows our finances are considered to be stronger than those of the vast majority of advanced economies – including the US, the UK, Japan, France and New Zealand.

Despite headlines to the contrary, and ill-informed statements by the Prime Minister, the agencies have confirmed our credit rating with a stable outlook.

I hesitate to compare government finances with individual or business finances, but I will say this. When you go into significant debt, you usually aren’t looking to pay it off completely the next week. The decision to go into debt is made by looking at your assets, your ability to service the debt, and the value of the investment of the debt.

We do need to make some changes. There will never be a time when fine-tuning isn’t needed because we live in an ever-changing world with an often volatile global economy. Situations change requiring adjustments to be made.

We are not in any sort of crisis. We have the luxury to be able to do long term planning to meet the challenges of the future whereas so many other countries are having to make decisions for the short term as a matter of survival.

Tony Abbott is looking for a legacy for himself rather than for our nation. He wants to say the debt was huge and I made it smaller and he doesn’t care if he has to lie about figures to make this look true. If he really wanted to reduce debt why on earth would he stubbornly insist on his paid parental leave scheme? Why wouldn’t he look at negative gearing and superannuation tax concessions and capital gains reductions? Why would he buy 58 fighter jets that won’t be in service until sometime next decade?

The “Infrastructure Prime Minister” is building the Abbott Highway to Hell to speed up the path to destruction and he is more than happy to sacrifice anyone who can’t help him along his way.