Boy oh boy! I just love this stuff. Every jeer, every criticism, every detestable mockery and unflattering comparison the Abbott opposition taunted the previous Labor government with is coming back to bite them. Economic mismanagement, leadership speculation, inept ministers, embarrassing moments with the media and worst of all, polling so bad it has set them running around like headless chickens.

On current polling numbers, the Liberals could not possibly let Abbott take them to the next election. Turnbull is the only choice no matter how much they hate him. And my guess is at least half of them do. Any thoughts that Hockey, Hunt, Bishop, Cormann, Andrews or Dutton could step up and do the job is laughable; Warren Truss would be a better choice. But they have to do something or go down in a crumbling heap in 2016. Thus far, Abbott ‘s performance is making Gillard and Rudd look positively statesman-like. So with everything they touch suddenly going pear-shaped, how does one explain their so called friends, Bolt and Jones instigating a very public stoush with Malcolm Turnbull.

While it has largely been the disastrous budget that has tipped the scales against the government, any leadership speculation arising out of it would be all the more damaging for them and just give the opposition a free kick or two. Looking back over the events that began with Andrew Bolt asking the PM about Turnbull, it looks more than ever like this was a planned assault on Turnbull precipitated by his dinner with Clive Palmer. Such nasty political onslaughts are rarely accidental. While we don’t know where it originated, the problem with this one is that it has backfired spectacularly. Whatever concerns various internal factions had about Turnbull prior to his dinner with Palmer, at least he was not in the public eye; he had been keeping a low profile. He wasn’t stirring the pot. Had Bolt not raised the matter on his programme, the dinner story with Palmer would have died within days. Now as a result of this unprecedented attack, Bolt, or those who have engineered this attack on Turnbull, have achieved the very outcome they didn’t want: the public’s attention is now squarely focused on leadership speculation between Abbott and Turnbull and when comparisons are made between them there is really no contest. The public can see that Turnbull’s affable nature outshines Abbott’s wooden image. Known as a small ‘l’ liberal Turnbull is less idealogical than Abbot, he is more articulate and the public perception is that he would make a far better leader than Abbott. He is also likely to attract the female vote in a way Abbott could only dream about, and even then, the dream would probably end badly. But additionally, Turnbull is not prone to gaffes. He will not attract the derisory comments at home and abroad that have raged across social media during Abbott’s first eight months. So, with Turnbull ticking all the right boxes, why would the liberals want to draw attention to him now? Abbott is already on the ropes for his gaffes, his deceptive manner and his disastrous budget. What is to be gained by having him compared very publicly with the one person in the government who looks more like a leader than he does?

There is something missing in this equation, something deep and sinister. Could it be that the power brokers deep inside the bowels of the Liberal party have had enough of Abbott for all the reasons listed above and have already decided that he has to go. We know they will do anything to stay in power and when it comes to bumping off an unpopular leader they have an impressive record. Gorton, Sneddon, Peacock, Howard, Downer, Nelson and Turnbull himself all went the same way. The only difference is that some went quietly. To dump Abbott and install Turnbull will be awkward and bloody and will take some time to implement. It will also make all of them look so utterly hypocritical given their reaction to the Rudd/Gillard coup. 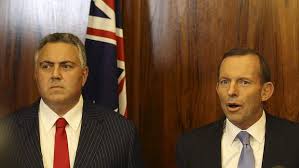 Turnbull can’t guarantee winning the next election but it might just work. The timetable for such a move would need to allow a year and a lot of ‘mea culpas’ for Turnbull to reverse the current state of the polls. This little incident is just the first move and assumes Abbott won’t fall on his sword. Labor might enjoy seeing the Liberals squirm and shift uneasily in their seats as they go through this painful process and they have every right to do so. But they also need to prepare for what will be a new challenge when it comes. Combining with others to block unpopular budget legislation in the senate will further frustrate Abbott and Hockey and cause them to compound their errors. One gets the feeling that it’s going to be a rocky ride from here on.