Workers over the age of 35 are now more likely to fall victim to an oncoming wave of institutionalised ageism in hiring and human resources practices brought on by the advent of an approved JobMaker scheme in the federal Parliament, the Australian Council of Trade Unions (ACTU) warned on Thursday.

A backflip of Olympic-level proportions from One Nation senators Pauline Hanson and Malcolm Roberts set the wheels in motion on Wednesday to leave workers in the over-35s age bracket exposed to the possibility of fewer hours, mass casualisation, and even job layoffs in favour of subsidised younger workers in the Morrison government’s JobMaker scheme.

Hanson and Roberts, just a day before, appeared to back amendments to the scheme which would have protected the job status of older workers, but their reversal meant that despite support from Labor and the Greens and also from Jacqui Lambie and Rex Patrick on the crossbench, older workers are now left vulnerable amid the hiring credit incentive capped at $200 per week given to employers for each new employee under the age of 35 which they can hire.

Michele O’Neil, the ACTU’s president, contends that the measures led by the consequence of the One Nation senators’ 180-degree turnabout on the issue may lead to greater rates of casualisation and under-employment for workers over the age of 35.

“The decision to reject these amendments is indefensible. This decision by the Government will directly lead to a higher rate of insecure work,” O’Neil said.

O’Neil added that the nature of the JobMaker legislation can only lead to the domino effect of institutionalising employer-based decisions leading to dire consequences for older workers.

“By opposing these amendments, the Government has made it clear that the aspects of the bill which will risk the jobs, hours and pay of working people are not bugs but features,” said O’Neil.

“This legislation is designed to allow businesses to bring in more insecure workers,” she added.

Hanson had initially claimed in the Senate that the JobMaker bill would have left older workers “overlooked and disadvantaged” and – ironically, when one takes the current ACTU’s views into account – “would encourage the loss of full-time jobs and reduce job security”.

Additionally, Roberts, her party mate in the Senate, admitted that One Nation had been coerced within Senate debates on the bill, with statistics that youth unemployment was currently standing at 14.5 per cent versus four percent for over-35s, verified by the Australian Bureau of Statistics (ABS).

So why the reversal?

“We were wrong on the amendments – we stand corrected,” said Roberts in defending the One Nation backspin thereby resulting in a 30-28 verdict in favour of the government’s original version of the JobMaker bill, adding that he and Hanson had “the courage and integrity to change our minds.” 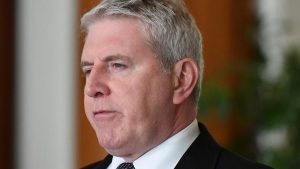 Brendan O’Connor, the ALP’s shadow employment minister and a vocal critic of the JobMaker scheme (Photo from SBS via AAP)

As a result, the Morrison government also runs the risk of further polluting the waters of the JobMaker malaise, alleges Brendan O’Connor, the ALP’s shadow minister for employment, where arrangements may see large corporate entities who pay large executive bonuses receiving taxpayers’ money in the form of wage subsidies.

“Voting against Labor’s sensible amendment to ensure the JobMaker hiring credit only goes to firms not paying big executive bonuses is a slap in the face for the growing queues of unemployed Australians – many of whom are excluded from the scheme if they are aged over 35,” O’Connor said on Wednesday.

O’Connor also said that the JobMaker plan was an ill-advised scheme from the start.

“The Morrison government voted against every single improvement federal Labor proposed,” said O’Connor, “but if truth be told, no amount of amendments would fix this woefully inadequate proposed legislation, which will not deliver what was announced by the Prime Minister.”

O’Neil said that as the Morrison government’s practices of throwing money into ill-conceived programs, with treasurer Josh Frydenberg being complicit in these endeavours which now have JobMaker added into the fray alongside JobKeeper and JobSeeker, they continue to leave the considerations of all workers behind regardless of age or demographic categories.

“The Morrison government’s response to this crisis has been to pump billions of taxpayer dollars into businesses, often without adequate safeguards and protections for workers,” she said.

But O’Neil furthermore targets the government’s attack in this instance on older workers, who may be left as collateral damage in the wake of the subsidies within the JobMaker scheme.

“This scheme does nothing to protect or support the jobs of workers over the age of 35,” O’Neil said.

Moreover, O’Neil and the ACTU have vented their frustrations at the government for not accepting their National Economic Reconstruction Plan (NERP) blueprint on any of the various times it has been offered to them over the last several months during the pandemic and recession.

“We have been calling on the Morrison government for months to put forward a comprehensive plan to create secure jobs through government investment in sectors like early childhood education, construction, tourism and manufacturing – instead we get this,” said O’Neil.

“The refusal of this Government to invest in saving existing jobs or creating secure work will delay and extend the recovery and cause significant financial hardship for working people,” she added.