On the heels of former Prime Minister Kevin Rudd’s recent Parliamentary petition which gained in excess of half-a-million signatures and had the hashtag #MurdochRoyalCommission trending on Twitter for days, the Greens have succeeded on Wednesday in making sure that journey begins with the single step of a Senate inquiry.

Sarah Hanson-Young, the Greens senator from South Australia who holds the party’s communications portfolio, in addition to Labor MP Andrew Leigh’s tabling of the e-petition in federal Parliament two days before, has seen her party’s bid for an inquiry into media diversity in Australia be approved after Rudd’s scrutiny over the holdings and practices of Rupert Murdoch and his News Corp enterprise had unprecedented results for any Australian Parliamentary petition.

“It’s clear from the half-a-million signatures on the record-breaking petition for a Royal Commission into media diversity that Australians are very concerned about the concentration of media ownership and the power and political influence of Murdoch. As a Parliament, it was right that we acted on those concerns,” said Hanson-Young, who will chair the inquiry.

As the Greens led the charge to get the inquiry underway, Hanson-Young was insistent to address the topic of Murdoch’s reach across all media.

Instead, with the rise and influence of other entities entering Australia’s media pantheon, as well as to enhance and protect independent publishers, Hanson-Young said that one-dimensional reasons to bring this inquiry forward did not exist.

“The media landscape in Australia has been changing rapidly. We need to ensure we have a strong and independent public interest news industry to support our democracy,” Hanson-Young said.

“We are losing the diversity of media voices across the country and access to news and public interest journalism in some regions altogether.

“The loss of media outlets and the increasing pressure faced by small and independent publishers is bad for our democracy and should be given the attention it deserves,” Hanson-Young added.

Hanson-Young also did not under-estimate the influence of social media players from Silicon Valley as news providers. 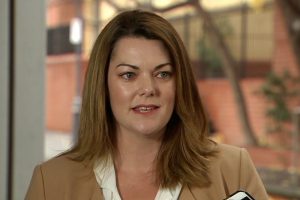 Greens senator Sarah Hanson-Young, who will chair the upcoming inquiry into media diversity (Photo from of abc.net.au)

“The dominance of Facebook and Google has been ever increasing and this inquiry will also provide an opportunity for a proper consideration of how that is impacting media diversity,” she said.

Rudd, meanwhile, told CNN on Monday (Australian time) that the petition itself was not only a referendum on a Murdoch/News Corp-dominated media landscape that sees it control 70 percent of news and information outlets across Australia, but also a defence of Australian democracy.

“The bottom line is the lifeblood of our democracies depends on a fair, balanced, independent, free media which separates out two things: the reporting of facts and the expression of opinion,” said Rudd.

And when Leigh tabled the completed petition in Parliament on Monday, that action reflected a sense of carrying out the will of the people in the name of media diversity.

“It’s just amazing, right? Half-a-million people, to take the time to sign an e-petition. It really did feel like a privilege, Marcus, to be carrying their views onto the floor of the Parliament,” Leigh told Marcus Paul of Sydney-based 2SM radio on Tuesday morning.

And as Leigh also described the sheer physical weight of the printed-out petition as being equivalent to “two reams of paper”, he also praised the bipartisan turnout to express their voices to Rudd’s call to action.

And that should speak volumes for the whole of the federal Parliament to consider it, according to Leigh.

“I think the federal government should take seriously the views of two former Prime Ministers, Malcolm Turnbull and Kevin Rudd, and half a million Australians who are calling for greater media diversity,” said Leigh.

“People are concerned when they see hundreds of local newspapers closing across the country. They’re aware that we have a pretty concentrated media market, and they know the important role of the media plays in our democracy,” Leigh added.

Leigh also concurs with Rudd about the petition representing a mandate on the democratic existence in Australia, akin to when Rudd has at various points in recent times declared Murdoch and News Corp “a cancer on democracy”, and with regard to newspapers in particular.

“Australia’s media is much more concentrated when you look at newspapers than if you look at radio. So if you look at the newspaper market, that’s quite narrow and various experts have looked at it and said newspapers play a particular role – an agenda-setting role. They tend to be the outlets that do a lot of the investigatory work. That’s where a lot of the careful considered opinion is,” said Leigh.

“So I think it is important that we have strong, healthy, diverse newspaper outlets. And at a local level, we know that local wrongdoing is much more likely to run unchecked if there’s no local newspaper,” he added.

“Seventy percent of the print readership in this country is owned by Murdoch. In my home state of Queensland, virtually every single newspaper up and down the coast from Cairns to the Gold Coast is owned by Murdoch. And the ABC’s funding is under assault. So for those reasons, I think it’s high time that we had an independent, dispassionate examination of the impact of media monopoly on Australian democratic life and alternative models aimed at diversifying media ownership into the future,” Rudd told Fran Kelly on the ABC’s RN Breakfast show last month when he initially unveiled his e-petition.

Between Hanson-Young’s announcement of the inquiry and Leigh’s tabling of the petition, the Morrison government’s Communications Minster Paul Fletcher – via Parliamentary rules and protocol – now has 90 days to respond to the orders.

Labor’s leadership, meanwhile, has been downplaying the social and societal impact of Rudd’s petition, stopping short of claiming whether or not they will support it.

“This is not something we [Labor] have been considering. This is something Kevin Rudd has been pursuing in his capacity as a private citizen,” Richard Marles, the ALP’s deputy leader, told the ABC recently.

But as Rudd said on the ABC’s Insiders show on Sunday: “My principle motivation in putting this petition together has been to bring to the surface this national conversation – rather than people being too frightened to talk about it.”

Hanson-Young, in her party’s agreed-upon establishment of the inquiry as the first serious step in the process, wants to see that process through to a desired result ahead of the next federal elections tentatively to be held in 2022.

“The US election has highlighted the need for truth in journalism and the need to call out unsubstantiated and false claims,” said Hanson-Young.

“Before we head into another election period in Australia, we can now take a proper look at the state of media diversity here and help protect a pillar of our democracy,” she added.