Now, there’s been a bit of a pile on about ScottyfromPeteEvansPotentialReplacement and his barramundi from Humpty Doo…

You know the sort of thing, lefty bastards with their politics of envy asking how much it cost the taxpayers for this fish to be flown in for the PM’s NYE feast. Well, I can’t answer that but – what with the subsidies that probably went to the organisation who caught it – I suspect that it was just a New Year’s Eve gift and it didn’t cost us a thing…

I’d like to emphasise that the previous paragraph is pure speculation and I don’t know a thing but like most opinion writers (Hey, happy new year, Joe Hildebrande!), not knowing anything is my prime qualification for writing. If I actually knew something, I might be a little more circumspect and who wants to read something by someone who’s carefully considering all possible scenarios.

So, I’d like to say, Good on you, Scotty for cooking fish even if it’s true that one of your family is allergic and would need an Epi-pen were she to eat any. Don’t surrender to those politically correct people who try and force anaphylactic restrictions on us all. “Freedom!” as Mel Gibson and Craig Kelly and a dwindling number of Covid positive protesters tell us.

Anyway, enough about Scott Morrison because I’d rather talk about my own difficulties. You see, I’m privileged and over the past few years I’ve discovered that’s a terrible burden. What with being white, male and – compared to most of the world – rich, it’s very hard for people to understand how hard it is when people question why so many of us are in positions of power. We used to be able to argue that we got there by merit but a federal government which not only includes people like Peter Dutton, Stuart Robert and Richard Colbeck as members, but actually has them in the ministry, pretty much ends the merit argument forever.

Now, when I call myself rich, I’m using an interesting definition of the word. By rich, I simply mean that I am quite happy that I have a home, food in the fridge, an income, and a plan to pay off my mortgage before I retire, so by comparison with so many people in the world, I’m wealthy. Yes, I can even afford to buy a RA test without needing AfterPay or Harvey Norman’s interest free terms…

(No, I can’t buy enough RATs to give them away to everyone and fuck Harvey Norman by leaving him stuck with excess stock, but thanks for asking and if anyone can organise something, you can put me down for next week’s pay…)

Many of us are richer than we feel, and we’re encouraged to measure our success against the affluent rather than those who’d gladly take our place. Some of us are poorer than the privileged few can possibly understand because we’ve never had to actually choose between eating and shelter. And now they may have to add a RAT to that choice.

It might be nice if the government could at least remove the GST from the RAT, but I suspect that we’d hear some sort of argument that making the price lower just encourages people who don’t need them to get one and, after all, the whole idea of making people pay is to bring down the number of positive cases…

As for the RATs, I can already hear Morrison standing up and saying, “It’s thanks to Can-do capitalism that we have these tests in the country, if it were left to state governments we wouldn’t have got them so quickly… No, I can’t give you the numbers of tests imported because that’s commercial in confidence… No, we don’t see any need to restrict prices, these businesses are having a go and if you have a go you deserve to make a profit, we’re not socialists like Labor who’d have you paying more in taxes, whereas we’re all about choice and you can choose not to buy the RAT… Thanks, but no more questions as I have to take an important call from a world leader in discount prices so if you need a new appliance, you can get ten percent off if you buy your RATs there.”

Yes, while Australians were cheering Scott Boland, he only stopped one test… The other Scott has managed to stop millions! 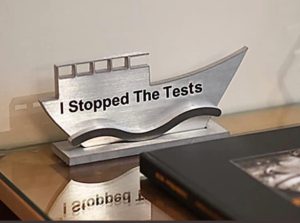