I get so annoyed with people who use their religious faith or a sense of outdated morality to condemn people they don’t like or agree with. The same sex marriage debate brought out the best and the worst in our nation but then we showed them all when a huge majority voted “Yes”.

As a Marriage Celebrant I have conducted many weddings a year. Some of the most moving and special have been the same sex marriages that I have been privileged to perform since the law changed.

Well, I’m still a disability support worker too but at 66 I’ve started a new journey that some of my friends might question. They could well ask why a husband, father and grandfather would be committing hours of his time and money to supporting queer refugees in far off Kenya, East Africa?

Well my answer is you don’t have to be gay or mad to care about suffering human beings. Justice and mercy, equal treatment for all transcends race, sexuality and any other difference that people may experience.

It all started with a Facebook friend request and message from a young man in Africa. I normally refuse these.

For some reason the request from this man was different so I responded. He asked me how I was and I said briefly “I’m ok. And you?” The answer was “I’m not ok. We have no food and no clean water.”

Now I had checked with a friend who knew him and who told me that he was a genuine gay refugee from Uganda. I knew that thanks to the support of conservative “hard right” evangelical Christians Uganda had hideous laws against homosexuals. Many African nations have been encouraged by these religious bigots to embrace laws that sentence homosexuals to isolation and sometimes death.

“Your Jesus said you’re supposed to give the oppressed a better deal.”

Yep, many many Christians would agree with him but sadly some of the loudest voices in our world don’t. Consider those hard-right Christians in America who seem to see Jesus in the racist narcissist Donald Trump who consistently refuses to condemn Klu Klux Klan types of organisations for their hate filled words and beliefs.

“What the world needs now is love, sweet love,

No not just for some but for everyone.”

I believed it as a child. I believe it more now. More humanity to others. More care. More love. More compassion. A better world.

That initial contact with a young man in Kenya found me joining a small group of people who have been doing extraordinary work for some of the most oppressed in the world. 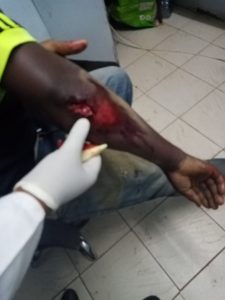 I was chased away from home by my parents and community after they discovered that am Gay. I was brutally assaulted and I was nearly killed …

I decided to run to UNHCR Kenya to seek protection and was then brought into the camp. Ever Since I arrived here, life has been so worse for me.

Last year I was attacked and cut in the neck by Sudanese refugees for being gay. In March this year, I was pushed into a long ditch, my joints and bones in the right leg got broken and dislocated. Some friends supported me with treatment and I thank God, there is an improvement though I am still in pain.

My life remains in danger.” There are many others like the lesbian whose girlfriend’s parents poisoned their own daughter when they discovered she was gay. No wonder her surviving partner fled Uganda fearing her own parents would do the same only to find in the Kakuma refugee camp the danger of hatred from other refugees.

Since beginning this new journey I have helped my friends form an association “Humanity in Need – Rainbow Refugees” and so far our first fundraising exercise has raised just over $1,800 but we have spent much than $6,000 just trying to keep people alive and safe. It’s a job that large organisations should be doing the UNHCR should be doing but it seems, since COVID, because they have had to restrict their activities they insist the best place despite the dangers is for all refugees to stay within the camp.

When they flee to live on the streets of Nairobi, bashings and abuse of all kinds take place where sometimes they have only their bodies to sell to survive.

Even so, there are some wonderful stories of humanity in action. Through online contacts I have met an incredible young man who takes people to medical clinics for treatment and often stays with them overnight if they are afraid and alone. A real hero to those in need. Another young man rents safe houses in Nairobi where he offers accommodation to people he finds on the streets. He does it out of love and a true sense of care. He is particularly concerned for a Lesbian group with children who are living in the desert. They need food and they need to be brought to Nairobi to another safe house. If only …

The generosity of a handful of people is paying for provisions and rents in private accommodation for queer refugees but we desperately need more people to support us.

You don’t have to be queer to help queer folk in need. You don’t have to be black to help black people. You only need to be human and to care. We are looking for people who can give what they can as a once off gift or on a monthly basis. The one thing we can promise you is that you will save lives. You will be part of a wonderful human story.

You might ask, what has happened to my new friend of only a few weeks ago? Well this week he was to fly to America to start a new life with safe asylum. We paid for his travel to the airport and for food for his flight. He was so excited, but then when he got to the airport and found some of his papers had not been stamped by the authorities he was turned away. And so, through no fault of his own, he returned to his house where the rent will be due soon to wait yet again.

He had said he wanted to meet me for a coffee when he arrived in America, but I had to explain that whilst I would like that very much, there is a bit of a difference in kilometres between Melbourne, Australia and there.