Following her election to the Australian Senate in July 2016, Pauline Hanson said that her very first priority was to call for a Royal Commission into the banking and finance sector – saying:

“We have families that are losing their family homes, properties – by the banking sector, which I believe needs a full investigation into because documentation that I have seen clearly shows that signatures have been forged.” (Pauline Hanson, 4 July 2016)

Just over six months later, and Pauline Hanson has apparently been talked out of a Royal Commission into all banks – instead settling for a much smaller Senate Inquiry (chaired by Pauline) into the banks’ lending practices as they relate only to farmers.

In breaking satirical news, Hanson was asked why she had backed down from the full Royal Commission. She is reported to have replied that she and Senator Chicken Roberts had decided to visit South Bank in Queensland to check out first hand whether there actually was a problem with the Banking sector in Australia’s cities, or whether it was just part of the Labor/Green agenda. 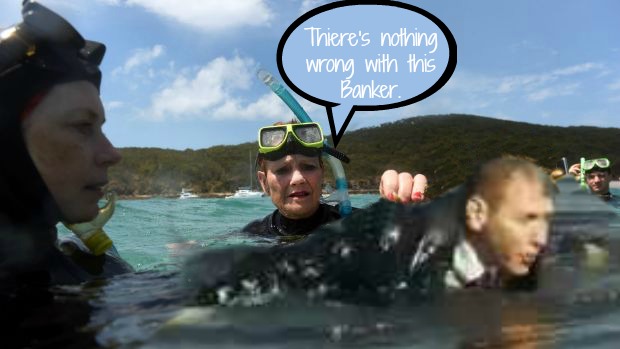 After taking a dive at South Bank – Hanson is reported to have said:

“If you actually look at the bankers there – in South Bank, in the middle of Brisbane city – they are in pristine condition. Why would we need a Royal Commission into Banks in the city when Banks like South Bank are clearly doing great?

We need to stop people with agendas telling lies about Banks and focus our energy on Banks that Turnbull has allowed us to look at – I mean that matter – in the rural sector. Places like BallBank in rural NSW and Wattle Bank in Rural Victoria.”

In further breaking satirical news, the Police are currently reviewing Hanson’s actions to see if it was illegal for her to kidnap a banker and drag him into the river.

This article was first published on ProgressiveConversation.