“If you are going to tell people the truth, you’d better make them laugh; otherwise they’ll kill you.”― George Bernard Shaw

Ok, just let me remind everyone of what I wrote immediately after last year’s horror Federal Budget.

“A very reliable source has just recently told me that Malcolm Turnbull will lead the Liberals to the next election. The first image of Turnbull I saw after this titbit was this”

Here’s the link if you want to go back and check it out. Makes interesting reading a year and a bit later.

Of course a few weeks ago, when I suggested that Abbott was likely to go to the Governor General and call a Double Dissolution rather than face a spill, I’m sure that most of you thought that I was joking. But yesterday, Fairfax quoted an unnamed Liberal source saying that Turnbull would need to act fast because Abbott was crazy enough to do just that.

So, while I hate to say I told you so…

Actually, no I don’t.

I told everyone that Malcolm Turnbull would lead the Liberals to next election. Was I just lucky? Or like Cassandra have a been granted the gift of prophecy only to have nobody believe me?

Well, whatever, here’s what the future holds. 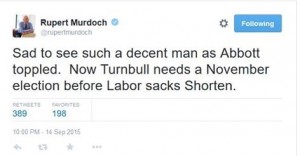