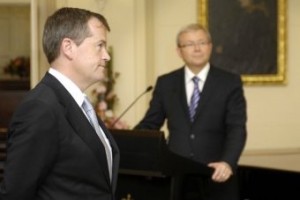 The title of this article is Murdochesque in that it may have inflamed anger you are already feeling, but the article that follows won’t provide what the titillatory heading implies.

I am not going to discuss Shorten vs Albanese or Abbott vs Turnbull. I am not interested in Left vs Right or misogynists vs misandrists. I am talking about us, we Aussies, regardless of who we voted for or where we were born or if we are rich or if we have breasts.

We have different past (and current) grievances which we could argue endlessly about who said what and who is to blame for current circumstances but where does it get us? What are we achieving by planting ourselves firmly in one camp and refusing to work with the ‘enemy’ in a constantly backward looking blame game?

For three years we listened to Tony Abbott deny the legitimacy of the previous government. We watched the behaviour in (and out) of Parliament degenerate into a slanging match which was reflected by the atrocious treatment of Julia Gillard.

Regardless of whether you agreed with the policies of the day, we allowed our first female Prime Minister to be bullied and slandered in the most despicable way. This would not have been tolerated in any other workplace. Nor would it have been allowed to continue at a school.

And the truly chilling thing was that this was led by people in public life. Coalition politicians and lobbyists actually suggested violence with comments like “slit her throat” from our now Parliamentary Secretary to the Treasurer, Steve Ciobo, or “they should be out there kicking her to death” from John Howard’s former chief of staff, Grahame Morris.

Tim Wilson, our new Human Rights Commissioner, said on Lateline last night that we must take personal responsibility and shine a light on dark places. Aside from the fact that it was in the context of saying that victims of discrimination and harassment should know their rights (human/moral, not legal) and stand up for themselves without legal protection, I agree at least with the sentiment that we should all try to set a higher personal and collective standard.

It is reasonable to examine what a politician has said or done in the past only in so far as it informs their current view and future direction. This constant waste of time in Parliament speculating about possible illegalities is pure manipulation and obfuscation. If someone has acted illegally or improperly then there are procedures to deal with that and appropriate bodies to pursue the matter.

The blatant trial by media of Slipper, Thomson and Gillard was echoed (or led) endlessly in Parliament. As the police were apparently investigating all three cases, I fail to see how this was in any way productive, and it was unquestionably prejudicial to any future legal case. It was a blatant attempt to destroy the reputation of three people, one of the few things mentioned by Tim Wilson as something that must be legislated against. Aside from this, it was an inexcusable waste of precious Parliamentary time. We are paying them to govern the country, not to pre-empt the judicial system.

I accept that the Coalition was voted into government by the majority of Australians and is therefore the legitimate government of the day. I do not accept that this means that the other parties and Independents must change their policies. They represent people who voted for them and should give alternate views a voice. But we need the courage and skill to be able to compromise, to identify common goals and a path towards them.

What I find harder to accept, but have been forced to, is that the Liberal Party actually believe that Tony Abbott is the best person to lead them and the person of most merit to fill the position of Prime Minister. After such a resounding victory at the last election and their incessant commentary about leadership tensions within the Labor Party, there is no chance that Mr Abbott will be replaced so we are stuck with him and must learn to accept that.

This makes negotiation much harder as Mr Abbott is that rare combination of a populist idealogue. He is in the process of silencing dissenting voices or expert advice that does not suit his agenda and is appointing people who represent only one side of society – that of big business.

Governments are the only protection that the people have from the greed of big corporations whose aim is to maximise their profits. Business plays to the umpire so if he isn’t calling offside then they will encroach as far as they can. Mr Abbott has made his ideology clear by sending off most of the other team so that is the political climate we must deal with.

There is no point sitting here in shock, or wallowing in self-pity, or screaming in indignant rage. We need to do what our politicians seem unable to do and that is to remember we are on the same team. We must listen to each other. We all want a better Australia. There is a common starting point that we can all agree on surely. If we accept that we all have that common goal then we can move to the next step.

Simply put, the role of government is to provide services and protection. They have many tools at their disposal to fulfil this role but before looking at the ‘how’ we should identify which services we need and what is most important to protect. Can we find common ground there?

If we can agree on the desirability of those goals then we can discuss how to achieve them regardless of what colour guernsey we wear. We should stop the hate and start building solutions. We have to open dialogue with people who think differently, ask them what they want to happen, and then find a way to get there that makes us both happy. Can we listen and help each other achieve what we want?

One example is climate change. Half of the population are in favour of urgent action, the other half are worried about their electricity bill. So we have to find a way to reduce power costs whilst acting on climate change. As I suggested previously, this could be achieved by making electricity GST free. I invite comment about this idea because it seems a compromise that satisfies both aims. It is also so simple it should be easy to sell to everyone. The only group that lose out are the government who will have reduced GST revenue but if they kept the carbon tax they would have an extra 7 billion and would save over 3 billion by not having to pay polluters. They would also save money on review committees and if they kept the Clean Energy Finance Corporation they would collect the profits of about 200 million a year. Surely over 10 billion should cover any loss of GST.

Can we agree to