Election 2022 is more than a Labor victory. It opens the parliament of Australia to new voices from the Greens, Teal Independents and others who can rattle the political foundations of post-1949 Australia with around fifteen members on a progressive cross-bench.

Current projections show that the result is still in doubt in at least ten seats as shown by the ABC News Graphics.

Don’t be surprised if there are more round-abouts as the vast tally of pre-polling and postal votes are considered with about one third of voters now drawn to minor parties from across the political spectrum.

This time the far-right agendas of some well-resourced far-right parties have been more than challenged by the rise of progressive members from the Greens and Teal Independents.

Remarkably, the Scott Morrison was prepared to concede defeat and to welcome the ascendency of Anthony Albanese just five hours after the closing of the polls.

Next week Anthony Albanese will have been sworn in as interim leader to meet the other global heads of state at the AUKUS Meeting with our foreign minister Penny Wong in Tokyo.

Despite a swing to Labor in Queensland on both primary and two party preferred votes, Labor might be unfortunate enough to lose the seat of Griffith and to fail to make it across the line in the potentially winnable seats of Leichhardt, Flynn, Longman and Brisbane. The situation in Griffith might change as counting of pre-poll and postal votes continues (see chart on Queensland two-preferred estimates on ABC News).

Results in Griffith are so close that Terri Butler could retain her seat if the LNP vote slips from second to third place as the LNP is directing its preferences to Labor ahead of the Greens (see chart on ABC News).

With Labor so close to majority government, it should be possible for the Albanese Government to attract good-will from the progressive crossbench members. Even a slender absolute majority for Labor offers the luxury of being able to pick and choose from a range of alternative progressive agendas.

Since 2019, Labor has learnt to develop a more pragmatic sustainability agenda. The future emphasis is on the importance of employment diversification in industrial and coal mining seats like Flynn and the Hunter Valley.

Regrettably, the swing to Labor was not enough to unseat the National Party’s political dinosaur in Flynn despite an improvement in Labor’s primary vote of 7.6 per cent (ABC News):

With the current size and enthusiasm of the progressive crossbench, it will be quite difficult for a more hardline members of the LNP coalition to wield control of the parliamentary agenda at least in the House of Representatives. The progressive independents can be an asset in strengthening the change agenda with the new resources available to savvy pragmatic members of the cross-bench and staffers who have little empathy for that old conservative populism at home and militarism abroad agendas which have been such a feature of the post-1996 era.

The LNP will of course strive to cling onto old agendas. In Queensland, the LNP has allocated its surplus quotas to assist in the re-election of Pauline Hanson until 2028.

Australia has changed since the more predictable days of the old two-party system. This time Labor obtained swings in heartland urban and regional areas which did not translate into the defeat of LNP members in both Tasmania and Queensland.

Hopefully, the Green support base will not perceive Labor as the enemy and work co-operatively with the Albanese Government to implement a change agenda. The olive branch of responsible political consensus was contained in Anthony Albanese’s victory speech:

I want to seek our common purpose and promote unity and not fear and – optimism, not fear and division. It is what I have sought to do throughout my political life. And what I will bring to the leadership of our country. It is a show of strength to collaborate and work with people, not weakness.

I want to find that common ground where together we can plant our dreams. To unite around our shared love of this country, our shared faith in Australia’s future, our shared values of fairness and opportunity, and hard work and kindness to those in need. And I can promise all Australians this – no matter how you voted today, the government I lead will respect every one of you every day. And I’ll seek to get your vote next time.

Having steered Australia through the life and death struggles of the worst years of War in the Pacific, the bespectacled John Curtin made a similar speech to that of our incoming prime minister to open the 1943 election campaign. This time Labor did not overlook the contribution of Indigenous Australians while continuing John Curtin’s commitment to a more independent foreign policy:

“We can answer its patient, gracious call for a voice enshrined in our constitution. Because all of us ought to be proud that amongst our great multicultural society we count the oldest living continuous culture in the world. And I acknowledge Australia’s next Indigenous Affairs Minister, Linda Burney, who is here…

… On Monday morning, arrangements are in place to have these people sworn in as members of my team. To enable Penny and I to attend the important Quad leader’s meeting in Tokyo, with President Biden, Prime Minister Kishida and Prime Minister Modi. And I want the leaders of the economic team to start work on Monday morning as well.”

Empathy for political change in Australia has already extended to global media networks particularly in the USA and Britain (Rod McGuirk in the Washington Post 20 May 2022):

Asked at the National Press Club in January to explain who he was, Albanese replied he was the son of a pensioner mother who had grown up with the security of a local government-provided house.

Albanese said he was 12 years old when he became involved in his first political campaign. His fellow public housing tenants successfully defeated a local council proposal to sell their homes – a move that would have increased their rent – in a campaign that involved refusing to pay the council in a so-called rent strike.

The unpaid rent debt was forgiven, which Albanese described as a “lesson for those people who weren’t part of the rent strike: Solidarity works.”

“As I grew up, I understood the impact that government had, can have, on making a difference to people’s lives,” Albanese said. “And in particular, to opportunity.” 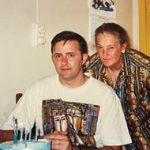 Our Man for All Seasons-A Younger Anthony Albanese with his mother Maryanne in Camperdown in 1992 to celebrate his 29th Birthday.

In the rough and tumble of A Grade Politics, co-operation between Labor and progressive independents and Green members can write a new era in Australian political history to ensure that our future is not highjacked by voices from the far-right of conservative populism as in much of the post-1996 era.