Eligible Indigenous workers in remote communities have continued to fail to benefit from a five-year-old employment program that was designed to do the opposite, the Australian Council of Trade Unions (ACTU) alleged on Wednesday.

Opening a conference to mark 20 years since its original ACTU Indigenous Conference in 2000 for this year’s event which opened earlier this week, the ACTU continued to attack the Community Development Program (CDP) over its lack of results as well as its execution for groups of marginalised people which it is meant to help out of poverty.

One year ago, the National Indigenous Australians Agency (NIAA) released a report, within its annual updates, which revealed that while participation numbers in remote communities from July 2018 to June 2019 remained virtually the same, employment statistics in the interval had fallen sharply.

As a result, and as a reflection of the CDP over its inception in 2015, a Senate inquiry revealed that the impact of poverty resulting from the joblessness in the communities cited showed a total of 36 percent of 1000 participants taking part in a government survey felt that they were worse off in that five-year interval.

Beyond the mass of the numbers, a different set of weights from the communities that the CDP was meant to help since it replaced the old Remote Jobs and Communities Program have landed with great impact on those whom it was supposed to help, in the way of increases in theft, family and domestic violence, incidents of financial coercion, and general mental health problems.

Lara Watson, the ACTU’s indigenous affairs officer, said that while the impacts of the COVID-19 pandemic and a national recession were further impacting the attempts of those living in Indigenous communities a means to find work and break their poverty cycles, the Morrison government was also lacking leadership in order to help in those regards.

“This year has meant a lot of change for millions of Australians, but workers under CDP face the same discrimination and mistreatment that has been embedded in the scheme since its inception,” said Watson.

“It’s an ongoing disgrace that we have unemployment policies in this country effectively divided on race,” added Watson.

Watson also cited that those in the participating communities were subject to more stringent penalties than others in the general population.

And the allegations of Watson and the ACTU are confirmed by The Australia Institute (TAI).

A 2018 study done by TAI found that in the first three years of the CDP’s operation, while the remote communities serviced by the program had unemployment rates up to 51 per cent, its participants were 25 times more likely to receive a penalty from the Department of Human Services or Centrelink than anyone partaking in urban Australia’s JobActive program.

“Despite accounting for a tiny percentage of overall welfare recipients the CDP routinely accounts for more than half of all financial penalties,” said Watson.

Nonetheless, the Morrison government continues to defend the program. 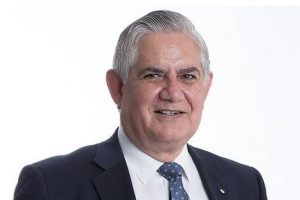 Indigenoous Australians minister Ken Wyatt, insistent that the CDP is on track (Photo from AFL SportsReady)

“It is still early days, but we are seeing strong results and hearing positive stories from our providers,” Ken Wyatt, the government’s minister for Indigenous Australians, said in October 2019 in defence of a number of reforms the program had underwent.

“These reforms were all about creating more jobs, improving engagement and reducing penalties – and we are delivering on all fronts.

“The latest data… shows penalties have almost halved in just six months, after we empowered our providers to use more discretion in how they work with participants. This will build trust and positivity on both sides.

“Engagement is also up – the caseload has increased five per cent since January, to more than 30,000 participants,” Wyatt added.

But while Wyatt also insisted in March, at the outbreak of the COVID-19 pandemic being declared, that the CDP’s participants could still continue in their reporting responsibilities without risk of penalty, shadow minister for families and social services Linda Burney called for a suspension of the program – and particularly its most controversial features, such as mutual obligations.

“Indigenous Australians, in particular, those in remote communities are at a disproportionately higher risk of serious infection from COVID-19, due to higher rates of chronic illness,” said Burney.

“It is now time for the Government to put the health and safety of remote communities first by suspending the [CDP] mutual obligation requirements, as a safety precaution,” she added at the time.

Last month, Burney doubled-down on the ineffectiveness of the CDP, after the suspension she had advocated was invoked in April, calling for its overhaul.

“[It] is broken and needs to be completely abolished and replaced, not restarted,” said Burney.

“The penalty regime under the CDP has proven to be unreasonably punitive, nasty and counterproductive – with a disproportionate number of breaches – leaving participants falling through the cracks,” concurred Patrick Dodson, the Labor senator from Western Australia who is the shadow minister for Indigenous affairs.

“The government’s broken and discriminatory [CDP] is no substitute for a plan for job creation and economic development,” added Dodson.

As recently as 2018, the ACTU advocated replacing the CDP with a program whose blueprint would put the emphasis on support over punitive measures, and instituted values such as developing and utilising long-term solutions to the issues facing remote communities, with the application of training, apprenticeships and fundings of projects and social enterprises which would be better enriched towards full-time employment opportunities.

And at its ongoing Indigenous conference, the ACTU adheres to these principles and standards.

“Despite all the evidence of the harm it has done and continues to do, including in reports from its own departments, the Morrison government continues to defend the program,” said Watson.

“We intend to make them accountable for that decision,” she added.