Victorian casual workers plying their trade in any of a number of industries and sectors may be entitled to up to five days of sick and carer’s pay in the near future, as the Andrews state government announced on Monday that a pilot program will be launched as a scheme within the 2020-21 state budget.

As the Victorian state budget is due to be read on Tuesday, the Andrews government recognised earlier during the COVID-19 pandemic that the loss of work affected thousands of casual workers in more than just an adverse manner, that they were feasibly unable to take days off to care for sick and infected family members by virtue of a simple consequence tied to the casual workforce – you don’t work, you don’t get paid.

“When people have nothing to fall back on, they make a choice between the safety of their workmates and feeding their family. The ultimate decision they make isn’t wrong – what’s wrong is they’re forced to make it at all,” Daniel Andrews, the state of Victoria’s premier, said on Monday.

The proposed program, entitled the Secure Work Pilot Scheme (SWPS), would provide five days’ worth of sick and carer’s pay, to be paid to workers at the normal casual award rates per the national minimum wage.

Currently, under the National Employment Standards (NES), casual workers – of which and as of November 2018 one in four workers across Australia were classified as casuals – have been entitled to two days of carer’s leave and two days of compassionate leave.

However, each of those spells are of an unpaid nature.

Should the SWPS get approved, workers in a yet-to-be-determined range of eligible industries and sectors would be entitled to as much as $753.80 based on a 38-hour working week at $19.84 per hour under minimum wage conditions updated to the current financial year.

Following the state budget’s reading, the scheme will be subject to several stages of planning and debate alike, before its enactment, targeted for a proposed start for late 2021.

The $5 million plan for the SWPS will undergo a series of consultations and inquiries between members of the state Parliament, regarding the design and feasibility of the scheme, including processes for casual and insecure workers to undertake, with ultimately no cost to businesses.

Such practices are expected to include casual and insecure workers to pre-registration for the scheme, an education campaign for enrolment, and a defining element of eligibility issues.

The Andrews Labor government, while describing the target of the scheme as going towards “priority industries”, has yet to define which industries and sectors will partake in the scheme, but areas such as cleaning, hospitality, tourism, security, retail, and aged care, and their related sectors, are expected to be involved.

The SWPS proposal has already won various degrees of support from the federal Labor party, the union movement and business lobbies alike.

Tony Burke, federal Labor’s shadow minister for industrial relations, immediately hailed Andrews’ leadership in Victoria on unveiling intentions for the scheme, and wondered why the Morrison government couldn’t do the same on a national level in Canberra.

“Victoria’s plan to provide sick pay to casual and insecure workers shows real leadership in stark contrast with the inaction of the Morrison Government,” Burke said on Monday. 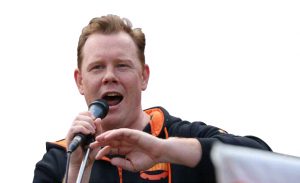 Luke Hilakari, the Victoria Trades Hall secretary, while agreeing with Burke on the lack of national action, also commended the Andrews government for taking the first steps.

“Just like the introduction of wage theft laws and labour hire laws, it has been up to the states to show leadership while Prime Minister Morrison is forced to play catch up,” said Hilakari on Monday.

Hilakari also believes that the proposed scheme at Spring Street could lead to a domino effect which would ultimately drive down the numbers in the casual workforce.

“Covid-19 laid bare the problems workers have been pointing to for years: insecure work is toxic and forces people on marginal incomes to make terrible choices. Do workers go to work sick to pay the bills, or do they risk their job by staying at home?” said Hilakari.

“Sick workers attending work is a cost to business. Workers having a sick leave entitlement may result in a major lift in workplace productivity with more workplaces staying healthy.

“Workers staying on the job when they’re sick is bad for business – for the rest of your staff and for your customers. We believe this scheme will benefit businesses and workers right across Victoria,” echoed Tim Pallas, treasurer and minister for industrial relations in Andrews’ state government.

The state’s highest business lobby, however, is taking a cautious approach to Spring Street’s proposal, but nonetheless looks forward to working with the state government and union groups to develop a multi-partisan solution that appeals to all parties.

Yet Andrews defended the scheme as a step in a progressive direction.

“This isn’t going to solve the problem of insecure work overnight, but someone has to put their hand up and say we’re going to take this out of the ‘too hard’ basket and do something about it – and that’s exactly what we’re doing,” he said.