Senator Mathias Pubert Cormann has chucked his car keys into the trifle and announced his pending retirement from politics after 7 continuous years of rogering the country as Grand Fubar of Finance.

Pubert’s track record includes doubling all debt accumulated by all governments since 1854, while:

“Through the past six years of the global recovery Australia has tumbled from near the top of OECD rankings to among the losers on unemployment, underemployment, wages growth, productivity, income per person, median wealth, retail sales, infrastructure development, interest rates and the value of the Aussie dollar.”

Apart from innumeracy Cormann’s other skill is said to be that of Senate looney-whisperer – surrendering any pretence of ethics by horse-trading with broomstick pilot Pauline Hanson and her strap-on Malcolm The Dwarf Tosser Roberts.

Despite, or perhaps because of his appalling record, his shifty deals and his Hayekian world view Pubert is held in high regard by the Tories which says much about the lack of principles and depth of talent in the Liberal Party wading pool. The net result is that Cormann’s departure is a plus for the country and it has animated the pundits with speculation on a reshuffle.

It has been conjectured that Spud Dutton, Pubert’s best bro and his co-conspirator in the shivving of Truffles Turnbull, is to be removed from despot depot at Home Affairs and its beloved ranks of dark-uniformed goons and door-breakers and shunted to Defence.

The prospect of Aldo Fitler being handed the keys to the ADF barracks, munitions stores and troop carriers is a nightmare of Trumpian proportions. Yet those in the know suggest that the Defence portfolio is a departure lounge for pollies on the outer, and Spud is not one of Smirko’s favourite people.

“Scott didn’t trust Dutton at all and regarded him as deficient in all respects – character, intellect and political nous.” Malcolm Turnbull – A Bigger Picture.

The sentiments are apparently returned:

“Of course, if Mathias had a poor opinion of Scott, Dutton’s dislike of him was even stronger.” Also from Malcolm’s book,

Agreeing with any of Spud’s opinions is a bit like enjoying the same picnic spots as Ivan Milat. Spud’s the type who’d buy his kids a 15 year old cat for Christmas so he wouldn’t have to go to the trouble of abandoning it by Easter, his personality attracts cadaver dogs from afar and he picked up his inter-personal skills at an abattoir.

However, Spud’s dislike of Smirko is rational, if lacking in self-awareness. They both revel in the mistreatment of the 2 Biloela kiddies locked away in the Kinderlager on Christmas Island and the demonising of minorities. They’re both authoritarian bullies and cowards who hate scrutiny and accountability. Their mutual loathing is understandable; it’s as if each sees his own reflection in the other and seeks to deny the reality of their own awfulness by projecting it onto the other.

The departure of Cormann and possible sidelining of Dutton in a reshuffle would be welcome news should there be any capable, principled alternatives to take their places – keeping in mind that the Reprehensibles rule in the squalid kakocracy of Tory politics.

Where in the L/NP effluvium are the curious minds, the talented, the ethical or those who see politics as serving the public interests rather than their own? Where are the idealists rather than the ideologues, the creatives vs the creationists, the thinkers not the cultists, dogmatists and evangelicals?

Trust in the government is essential to a healthy democracy, it’s not just an option where spin is a suitable substitute for truth. In a crisis it is indispensable yet Morrison sees it as a PR opportunity. Cormann may be going and Dutton may be headed for the wood-chipper but we are stuck with the opportunistic Morrison and his fellow cultists, disaster capitalists, grifters and incompetents. Tim Smith, Tory member for the Victorian state seat of Kew, a man of bovine intellect and the presence of a lasagne thrown from a speeding car has been desperately trying to raise his profile, in true Tory style, by politicising the pandemic.

Smith’s great-grandfather founded Ferguson’s Cakes in 1901. The family sold their shares in the business but Timmy seems to have retained some familial fondness for confectionery – this once dedicated rower’s spreading deportment suggests he may have simply served as skiff ballast.

During his tenure as MP Dim Tim has overseen two consecutive 5% swings against the Libs in what was a blue-ribbon Tory enclave.

While Premier Dan Andrews slogs his guts out and Bill Shorten volunteers his labour on the front lines Albo-style this douchebaguette tweets his bile and hypocrisy and Smirko, again using “Jen and the girls” as human shields takes time out to go to the footy. We have a crisis and Smirko continues to screw Australia. Daggy style. 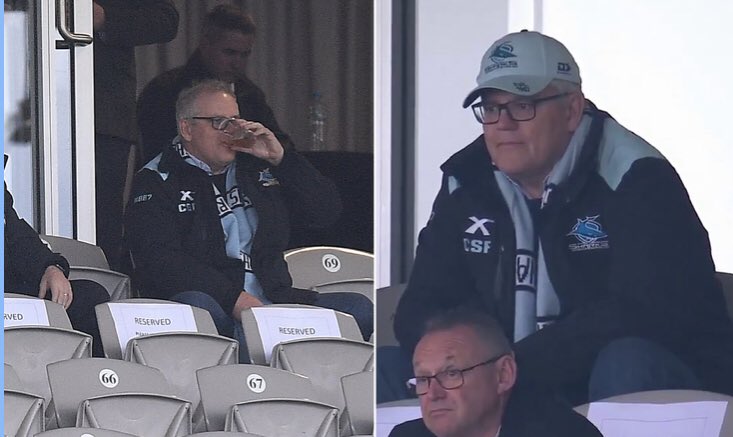 This article was originally published on the Grumpy Geezer.