In the torrent of tributes for Gough Whitlam after his death in October 2014, it is easy to forget the rancour and bitterness surrounding his ascent to the leadership of the federal parliamentary Labor Party. He was elected leader at a caucus meeting in February 1967 after Arthur Calwell, having lost three federal elections and now aged 70, decided he would step down.

The electoral disaster three months earlier, on 26 November 1966, was especially cruel for Calwell, who – against Whitlam’s wishes – had campaigned strongly on the issues of conscription and the Vietnam war. Both Calwell’s memoirs and Whitlam’s biographer highlight the policy differences and personal antagonisms between the two in the run-up to that election.[1]

But neither mention a crucial event sandwiched between the November defeat and the Whitlam victory: the state visit to Australia of the Premier of South Vietnam, Air Vice-Marshall Ky, in January 1967. That visit, which has largely been overlooked by historians but which then received extensive national press and television coverage, threw a sharp spotlight on the divisions within the ALP and, especially, between the leader and his deputy.

Focusing on the Ky visit also illuminates Calwell’s principled stand, opposed by the pragmatic Whitlam and ridiculed in the media.

Calwell immediately launched a series of vitriolic attacks on Ky. On 23 December he had stated that the visit of Ky, a “power-hungry opportunist”, would shock every Australian except those who “condoned and tolerated murder, brutality and injustice”. His invective went further: in a separate statement, Calwell called Ky a “little Quisling gangster”, a “miserable little butcher” and a “moral and social leper”.[2]

On 26 December he announced his intention to march at the head of any demonstration against the visit since “[i]f we are to fete military dictators it will be done in the face of my strongest opposition”. He added that the day Ky stepped on Australian shores “should be declared a day of national mourning”.[3]

Calwell’s strong reaction may have been influenced by a 1965 report that Ky admired Adolf Hitler. Ky was interviewed by a British journalist, Brian Moynahan, who he told, in a remarkable display of naïveté: “People ask me who my heroes are. I have only one – Hitler.”[4] The Jewish News commended Calwell for his “timely and penetrating opinion” about this “unwelcome guest”.[5] Calwell’s deputy was “not available for comment”.[6] 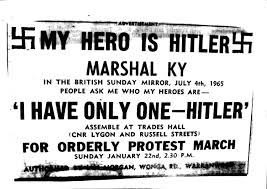 As government preparations for Ky’s visit firmed up in the first two weeks of 1967, invitations to State functions were issued. Customarily, the Opposition leader and his deputy would be invited and Whitlam was in an embarrassing position, since he had visited South Vietnam in 1966, met with Ky and was his official dinner guest in Saigon.[7] But Calwell’s stated intention to boycott any official meeting or dinner with Ky sank any chance of ALP leaders attending. “They couldn’t very well have the dinner if they didn’t have me present…And so it was all cancelled. And Whitlam disappeared from the scene.”[8]

When Whitlam returned from a nine-day family holiday on Lord Howe Island on 9 January, he refused to be drawn into discussion about Calwell’s anti-Ky remarks or whether he would protest against the visit: “Speak to my secretary [John Menadue], he’ll answer any questions for me.”[9]

Just as the ALP was divided over Vietnam,[10] so it was divided over Calwell’s position on Ky. Despite the left-wing executive of the Victorian branch instructing all Victorian federal and state Labor parliamentarians to participate in anti-Ky marches and demonstrations, and Calwell threatening censure from the Party if they did not,[11] they were thin on the ground.

At the first of three protests, in Canberra on 18 January, Calwell led a march (dubbed “Arthur’s Long March”) of 700 protestors to Parliament House where, inside, Ky was being welcomed. Only four members of the parliamentary Labor Party participated. One, the MHR for Reid, Tom Uren, prevented photographs of Calwell being taken with demonstrators holding Vietcong flags, while Calwell lashed out at a pro-Ky youth who carried a placard, “Calwell the Crumbling Cretin”.[12]

Calwell, “looking fit and in vigorous speaking form”, claimed this was “a black day in Australian history” and reiterated his epithets: “Ky is a Fascist. I repeat it – he is a murderer, a miserable little butcher, a gangster Quisling.”[13] Later, Calwell criticised his colleagues who “went fishing or did something else.”[14] 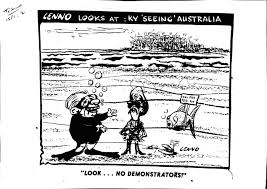 After the demonstration, a Bulletin journalist, Peter Samuel, asked Calwell if he was frightened the ALP may not “stick to its principles” on Vietnam, to which Calwell replied: “Well, I’m frightened it might not if one man gets control.”[15] Alan Reid, in the same issue of the Bulletin, remarked that Whitlam had “disappeared wraithlike and mute as a Sydney rock oyster … though he had eaten Premier Ky’s food and drunk his liquor during a recent Vietnam visit.”[16] The Australian suggested that “some” of Calwell’s attacks on Ky were in fact directed at Whitlam,[17] while Dr Jim Cairns criticised Labor MPs for absenting themselves from the Canberra demonstration; it was, he said, their “active political duty” to do so.[18]

Participation in, or absence from, the Melbourne march on Sunday 22 January, became a litmus test of leadership credentials. Both Cairns and Frank Crean, who intended to contest the party leadership, announced their intention to join the march; Whitlam, the front-runner, remained silent.

The Victorian executive, despised by Whitlam, hoped his absence would “prejudice” his bid for leadership.[19] “This is expected”, reported the Sun’s Jack Allsopp, “to have some influence on the Caucus ballot”.[20] The Melbourne march was a triumph for Calwell. He led a two-mile march of over 8000 people stretching for five city blocks from the Trades Hall to the Domain, close to the heavily guarded Government House, at which Ky was staying. A clergyman described how he was “deeply stirred” by Calwell’s speech:

“one of the finest bursts of oratory I have yet heard from a politician. … Press reports had convinced me that Arthur was more than a little mad, but his ‘Sunday sermon’ suggested to me that he is more than ever a noble leader.”[21]

On the other hand, mainstream press opinion on Calwell’s anti-Ky position was near-unanimous. Calwell was “stooping to factionalism”;[22] was “obstinately perpetuating the divisions in his party”;[23] was resorting to “hysteria”;[24] and with his “wild harangues” against Ky had “reached the end of the road … But now he has overstayed his welcome. He is a Hamlet who will not leave the stage.”[25]

At the caucus meeting of the federal parliamentary Labor Party on 8 February, Calwell did leave the stage. Whitlam won the party leadership by a clear margin: 39 votes to Cairns’ 15 and Crean’s 14. But the battle did not end.

The new leader stated on television that the former leader had “debauched the Vietnam debate”, which “appalled and staggered” Calwell, who indicated he would report Whitlam to the party’s Federal Executive.[26] But Calwell would have taken heart, had he known of it, from this private letter to the Prime Minister. Part of it read: “It is Mr Calwell who is fighting the forces of evil in Australia – thank goodness we have someone fearless and good to help us – otherwise we would be in despair.”[27] This article first appeared in Labor History Melbourne May 23, 2015.

Professor Phillip Deery is a review editor of Labour History, was a guest editor of American Communist History, and is a research associate with the London School of Economics and Political Science Ideas Cold War Studies Programme. He has received two fellowships from New York University to undertake research into the Cold War, and has also received numerous research and teaching awards and prizes.

[1] A.A. Calwell, Be Just and Fear Not (Melbourne: Lloyd O’Neill, 1972), 230-2; Jenny Hocking, Gough Whitlam: A Moment in History. Volume 1 (Melbourne: Miegunyah Press, 2008), 267-71. Strangio writes of their “damaging rift” just prior to the election when Whitlam deliberately distanced himself from Calwell’s policy on the withdrawal of troops from Vietnam. Paul Strangio, Keeper of the Faith: a biography of Jim Cairns (Melbourne: Melbourne University Press, 2002), 164.

[14] Australian, 21 January 1967. At this meeting, a reception for Calwell at the Sydney Trades Hall, only MHRs Rowley James and Tom Uren, and Senators Lionel Murphy and Jim Ormonde were present.

[17] Australian, 10 January 1967. News-Weekly (18 January 1967) agreed: “the real target was not Ky at all, but Whitlam.” While this may have been a factor, it underestimates the depth of Calwell’s hostility to the “dirty, unwinnable, immoral” war in Vietnam.

The National Film and Television Archives has three short film clips from Ky’s visit, which can be viewed online