Old fried dough stick (老油条 Lao Youtiao) is an amusingly accurate sobriquet that China state TV aimed at he who the French might label with the similar floury metaphor of douche baguette if they were to care about his existence at all. Roughly translated Lao Youtiao means a lazy manipulator, someone insincere, who’s two-faced, hates doing real work but has been around long enough to know all the tricks of how to take credit for others’ work and deflect any blame.

That definition immediately identifies China TV’s target because it so perfectly describes the twice-failed travel agent who is now our shirker in chief. There’s an ironic edge to this most excellent sledge given it originated from within the thought control machinery of an increasingly antagonistic, testy Chinese Communist Party. No attempt at stereotypical Oriental inscrutability here – it was a Sichuanese Phuk Yu take-away. Extra chili.

In an inversion of Eastern nuance vs Western bluntness the Betoota Advocate coined the more artful, inspired “Scotty From Marketing”. It’s so essentially Scott Morrison that, like Barnaby The Beetrooter in a rooms-by-the-hour motel, it rooted and propagated, spreading to become his default designation.

The issue to hand though is confusion over whether the Tory product is being fronted by Scotty From Marketing as chief spruiker or whether Scotty sees himself as the product. The give-away is his tragic, try-hard self-branding as ScoMo® – as pathetic as it is derisory yet it’s signed under Prime Ministerial letterhead, it’s a byline on his social media and it’s a widely wielded PR brand. The lumpen yob even offered up this facile diminutive to a bewildered Japanese Prime Minister Yoshihide Suga when he turned up uninvited in Tokyo for an all-expenses paid photo-op.

Scotty From Marketing’s motive is clear – he’s selling himself. He is the product.

At some point in his career trajectory of always failing upwards it must’ve dawned upon Morrison that at best he’s an acquired taste – like tripe & onions or getting used to the smell of cat’s piss on the cushions.

Some personal brand management was obviously required otherwise gulling the dupes and the complacent into imagining he’s the likable bloke from next door is a curious focus for an arrogant egoist with a messiah complex and an over-dose of misplaced self-confidence. Perhaps he possesses a smidgen of self-awareness – a hidden memory from his days as a child actor who people found less distasteful when he pretended to be someone else?

How does a prime minister pass the time while in quarantine? The Sunday Telegraph has spoken to Scott Morrison and obtained exclusive pictures in lockdown. https://t.co/OpQbIclzwn

The real Scott Morrison is the shadowy minister for immigration who questioned the decision to allow the relatives of 48 drowned asylum seekers to attend their funerals and who then immediately sought to race bait by capitalising on concerns about Muslim integration.

The real Scott Morrison is the architect of the illegal $1.2 billion guilty-til-proven-innocent Robodebt disaster, the purposeful design of which was to persecute and demonise all those dependent upon the social welfare safety net.

The real Scott Morrison was rubbed in all of our faces when he disappeared on a de-camping holiday to Waikiki as large swathes of Australia was consumed by fires – the spiv who told his office to deny his whereabouts and when called-out staged photo-ops and forced himself on burnt-out victims and exhausted firies.

Morrison is the shit who hit the fan. The waft from a turd like Morrison is not easily disguised. It takes the efforts of a North Korean-level propaganda machine (24/7 personal photographer inc.) to put lipstick on the dipstick, to develop a Trump-lite cult of personality when the personality has all the appeal of Jeffrey Dahmer’s toothbrush, a shiver whose physical manifestation is a wide-hipped, slope-shouldered, man-boobed smirking arsehole. Yet they seem to have managed it.

How does this beer chugging, crotch-stained galoot, this shonky grifter and chancer manage to get a 66% approval rating as Prime Minister?

The gullibility, short attention spans and short memories of the patsies and marks are manna from Scotty’s miraculous heaven. A catalogue of templated, market-tested personas is put through the spin cycle of blokey schmaltz – curries, cubbies, chook pens, exercise bikes, inflatable sharks, trouserless scrolling of his latest Instagram posts, pointer at maps, wearer of high viz, smirking twat in a hard hat – it’s a scroll & click cornucopia of pre-fab personalities. Which one do you like, madam? 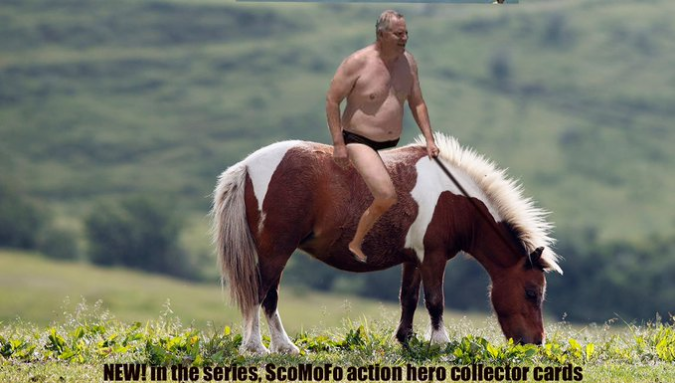 It should surprise no-one if this habitual photo-bomber should produce a Christmas picture calendar of his greatest curries, a collector set of ScoMo action figures, a Scotty board game or jigsaw puzzle.

The great pretender gets away with this schtick because, unlike with Harold Holt, people don’t bother looking too hard.

After the “many moments of sadness” surrounding bushfires and COVID-19, @ScottMorrisonMP has opened up about his feelings towards Australia. #auspol https://t.co/CIEAvzaoC5