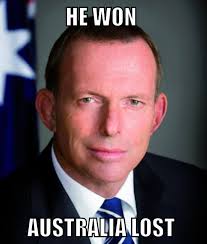 The truth of the matter is that my Party is at times its own worst enemy. For the six years Labor has been in power it governed well in spite of the enormous inconvenience of minority governance. This is indisputable when you look closely at its economic record, the legalisation passed and reformist policy from within a minority framework.

Its problems though did not originate from everyday governance. In this sense, it has been no better or worse than any other government.

Rather its problems stemmed from personality conflict and the pursuit of power. Politics by its very nature is confrontational and uneasy with those with ego who pursue power for power’s sake or those who think they have some sort of ownership of righteousness.

Labor had two formidable intellects in Rudd and Gillard. In fact, combined they would total much of the opposition front bench’s intellectual capacity.

It is one thing to replace a leader but a different thing when the leader happens to be the Prime Minister who the voters perceive they have elected.

Hindsight is, of course, a wonderful thing so it is easy to say that Rudd should never have been replaced. That Rudd undermined the 2007 election campaign and continued to undermine Julia Gillard for most of her tenure. He never showed the grace in defeat that Turnbull displayed.

So we had two leaders of sagacious intellect. One a ubiquitous narcissist, who couldn’t listen and who couldn’t delegate. On the other hand, we had a woman of immense policy capacity (and history will judge her that way) but would be hard pressed to sell a Collingwood Guernsey to a rabid supporter.

Minority government has enormous, day to day difficulties without having one’s leadership frequently undermined. And we can speculate about a myriad of other possibilities but it won’t change the fact that ego destroyed any chance Labor had of winning the 2013 election.

This is the main reason why Labor lost. Not because they didn’t govern well. As Tanya Plibersek said 10/10 for governance and 0/10 for behaviour.

But because life is about perceptions, not what is, but what it appears to be. We painted a picture of irrational decision making, of dysfunction and murderous disloyalty. Rightly or wrongly that is the perception. In other words, we committed political suicide.

There are of course other factors that contributed to our downfall.

Despite the growing influence of the Fifth Estate the Main Stream Media still packs an enormous punch. In advertising, the success of one’s spend is measured by the resulting sales. The media can measure its influence in the Polls.

Labor was the victim of the most concerted gutter attack ever insinuated upon an Australian political party, from all sections of the media, although one, in particular, News Corp, has gone well beyond the realm of impartiality.

Labor was drowned in an avalanche of lies, repugnant bile, half-truths and omissions. The media lost its objectivity and news reporting. It became so biased that it no longer pretended to disguise it.

The MSM has forsaken truth, justice and respectability in its pursuit of the protection of privilege. They printed and told lies with such reprehensible consistency that a gullible and politically undiscerning Australian public never really challenged it.

As a famous businessman once said.’’ I spend a lot of money on advertising and I know for certain that half of it works’’ Clive Palmer has won a seat because he had the money to promote himself. He proved the power of persuasion with money.

The Fifth Estate (including me) attempted to counter these nefarious attacks but in my view, we are three years away from reaching full potential.

Having said that I plead some degree of ignorance, and I must say, I am absolutely astounded at how many people participate in social media and the voice it gives them.

However, in three years’ time, its ability to influence the younger generation will have risen exponentially. Added to that will be a declining older generation.

Tony Abbott successfully adopted an American Republican-style shock and awe approach in his pursuit of power. Mainstream media hailed him the most effective opposition leader in Australian political history.

This was solely based on his parties standing in the polls and said nothing about the manner in which he lied and distorted facts and science to bring about this standing.

Perhaps they should rethink the criteria they use.

On a daily basis and in the parliament he sought to abuse, disrupt proceedings and tell untruths that normal men would not.

However, the consistency of his negativity had an effect on an electorate in a state of comatose. From the time the election date was announced he portrayed himself as a different person. An indifferent public was fooled by this chameleon disguise. He was and still is by his own admission a liar.

David Marr used these words, to sum up, the character of this would be Prime Minister.

“An aggressive populist with a sharp tongue; a political animal with lots of charm; a born protégé with ambitions to lead; a big brain but no intellectual; a bluff guy who proved a more than competent minister; a politician with little idea of what he might do if he ever got to the top; and a man profoundly wary of change.”

“He’s a worker. No doubt about that. But the point of it all is power. Without power, it’s been a waste of time.”

How one appraisers the reasons for Labor’s loss might differ from individual to individual and there will undoubtedly be many thousands of words written on the subject. For me, it can be rather succinctly summed up in a sentence or two.

A political party, union of workers, sporting team or board of directors is only as good as the total sum of its parts. A good leader facilitates, emboldens and inspires the team, but a leader with self-interested ambition can destroy it all.

This is the first in a series. Next week Labor reform.