As I recall, the saying goes something along the lines, “no matter how bad figures are, you can always pretend they look better,” and Joe Hockey has certainly done that with the latest GDP numbers released on Wednesday.

The March quarter growth rate was 0.9% with the year to date, March 2015 result coming in at 2.3%. Both figures are below those needed to bring unemployment down, yet what does Joe say? “These numbers have proven that there are some clowns out there that are talking about recession and dark clouds on the horizon.”

I guess I’m one of those clowns based on my assessment last Monday. Joe went on to admonish we clowns further by saying, “They have been proven to be looking foolish, those people, and we should be focusing on what is before us which is raw data that says the Australian economy is, in the last quarter, one of the fastest growing economies in the developed world. How good is that?”

Well, how good is it really? Yes, it certainly is raw data but what the treasurer should be focusing on, is what the other raw data underneath tells us, because that’s what most economists have been doing and it tells a different story. To begin with, annual growth has been in decline, for the past three years notwithstanding an occasional quarterly spike.

Some of those other economies he is referring to are in the Northern Hemisphere (USA), just emerging from their winter. Of course they would be lower. But, more importantly, our annual growth rate of 2.3% puts us 19th out of the 34 OECD countries. Not much to cheer about there.

But, here’s the deal. Export volumes increased by 5% but the dollar value of those exports fell 12%. Domestic consumption rose by 0.5% but wages growth was only 0.1%. That means we either dipped into our savings or took on debt to pay for it. Business investment fell 0.5% and imports rose 0.6%. 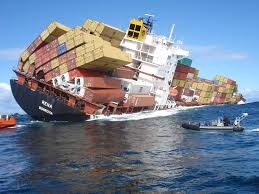 In fact, it was a good thing Joe announced these results on Wednesday rather than the following day when the trade figures for April were released. He would have had to explain the $3.9 billion deficit (imports over exports), which was three times the deficit in March and the worst on record. That will have no small impact on the GDP results in the June quarter.

No doubt the treasurer will be hoping for some lift in business investment in the June quarter following the announcement of a $20,000 tax deduction for tradies. Just how many are rushing out to beat the June 30 deadline for this year’s tax return will be revealed in September.

I wouldn’t be holding my breath. But if they have, their tax bill this year will be considerably less, further impacting on revenues.

For the moment though, Joe Hockey has been given a bit of respite. He’s likely to need it. The next two quarters will likely tell a different story. By then, he will be regretting the day he called those who delve far deeper into GDP results than he does, clowns.

Deviations in quarterly figures can give one a false sense of security.