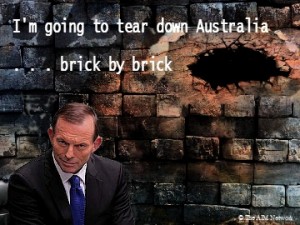 Sally McManus is the Secretary of the Australian Services Union in NSW and the ACT.

She has been a campaigner and an organiser for more than 20 years and spends a lot of time doing and talking about organising and campaigning. Her blog is a comprehensive list of policy and other decisions taken by the Abbott Government. I cannot vouch for the veracity of the entire list (although I have no reason to doubt it) but I recommend it to those with an interest in how Tony Abbott intends changing Australia.

This is the list thus far and it is updated regularly: