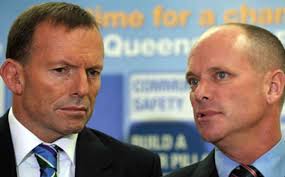 Over my morning breakfast, I perused an article in The Age about Tony Abbott’s reboot, where Michael Gordon told us:

“Finally, he’s done it. Tony Abbott this week pressed the reboot button on his leadership in a manner that gives him a genuine prospect of the political recovery that seemed utterly beyond him only a week ago.

“The changes in style, substance and direction are real. Whether they will endure is something else. Whether they result in a reappraisal by voters will become clear in the months ahead.”

“And there’s more. Joe Hockey appears to have emerged from a horror run that began around this time last year; Scott Morrison has completed his metamorphosis from partisan saboteur of Labor’s border protection policies to consensus champion on welfare reform; and Malcolm Turnbull is just the same – the charming alternative”

Mm, the phrase, “but wait there’s more” is ringing in my head and I can’t help thinking of those ridiculous ads. But then the taxpayer funded “information” ads on Higher Education, where it assured us that we paid nothing upfront seemed to be uncannily similar to Harvey Norman assuring me that I could have interest free terms on anything I wished to purchase. Of course, that’s unfair, because the Government is still intending to charge interest on the HECS debt, whereas Harvey Norman doesn’t on the interest-free purchases

But before I start picking on Mr Gordon’s assessment, I must say that I have noticed that there have been many articles saying how well the Liberals are doing this week, and how this gives them a great chance of recovery. While not wishing to appear too harsh, it does seem to me that they’ve been involved in so many car wrecks, that a week without a noticeable bingle may be something for which the driver should breathe a sigh of relief. However, it doesn’t mean that I’ll want to lend him my car, and I hardly feel that it qualifies to be a competitor in the upcoming Grand Prix.

Many articles put the success down to a bounce in two polls. And by bounce, it means that the Liberals returned from the disastrous polling of late January/early February to the poor polling of the previous few months. This is the sort of logic where one announces that while one usually loses five hundred bucks every week on the pokies, last week was excellent because one only lost two hundred.

But apparently this bounce – and no, I’m not going to make the point again that a poll by itself is useless, two polls are a little more accurate, but I’d want to see a third before I attach any meaning to a poll – has made Mr Abbott more confident, more assured, better able to go on the attack…

Gee, perhaps I don’t pay enough attention, but I wouldn’t have thought that there was anyone out there saying, “That’s the trouble with our PM – he lacks self-assurance, he really needs to go on the attack a bit more. He’s just too much of a nice guy and takes far too much advice.” Certainly, I didn’t get the impression that the backbench was saying anything like that when the spill motion was moved.

But let’s put Tony aside for a moment. (Mm, should I refer to him as Tony, or is that disrespectful… I did read a letter to the editor where someone was arguing that he IS our Prime Minister and we should show him respect even if we disagree with him. I presume that writer wrote a similar letter during the “chaff bags” and vegemite sandwiches of Julia Gillard’s term in office, but for some reason it wasn’t published.) Where was I? Ah, that’s right I was putting Tony aside, and that’s something I’m sure a large number of people would like to do. Mm, reminds me of an old joke:

“Your majesty, the good news is that the Revolutionary Council was talked out of beheading you by a very persuasive argument from one of its members. The bad news is that he convinced them that it would be better to have you pulled apart by horses!”

Moving onto Joe Hockey, who according to Mr Gordon “appears to have emerged from his horror run”, I can’t help but wonder at what point he’ll make a public utterance without talking about Labor. As I suggested once before, if you’ve been convinced that a tradesman’s work isn’t good enough, and you decide to call a different tradesman, you hope you aren’t being charged by the hour when he spends all his time telling you how bad the previous tradesman was and how, if you hadn’t called him in, you’d be in a lot of trouble now, and he’d start fixing the problem but unfortunately the Senate’s put an embargo on his tools so all he can do is give the thing a couple of kicks and tell you what a great job he’s doing under the circumstances.

I guess the first problem I have is the assessment that Smokin’ Joe has had a horror run. To me a “horror run” suggests a series of events that were outside one’s control – such as the car and the washing machine both ceasing to work in the week where you get the sack… Or coming into power as a financial crisis grips the world. Announcing stupid policies, then finding them unpopular, but asserting that you could have done a better job explaining them, sounds more to me like it’s one’s own incompetence at understanding politics than a “horror run” – in much the same way that someone who continually sticks his knife in the toaster and uses the hair dryer in the bath can’t be considered to be having a run of bad luck when they keep getting electric shocks.

But it’s the idea that Joe has emerged from his past and won’t spend any more time with hairdryers, knives and toasters that I find puzzling.

“…the Intergenerational Report released by Treasurer Hockey, and the picture it paints of a nation where the number of people aged 65 and over is projected to double over the next four decades.

“While the Coalition will use the report to justify last year’s budget and pre-sell the one to be revealed in May, one of the biggest challenges will be to provide the incentives, flexibility and protections for people to work longer.”

So, we need to get more people to work way past 65? Of course, we also need to get those lazy bludgers of the dole and encourage those in wheelchairs to stand on their own two feet, because the Age of Enlightment is over… Sorry that should be “entitlement”. Although it works both ways. I was interested to hear that Gina Rinehart thinks the age of entitlement is over too. I guess she doesn’t mean the entitlement to take things out of the ground while only giving a fraction of their worth to the people who actually own them, but that’s a whole other issue.

The thing is we don’t have enough jobs to go around even with those lazy 65 year olds deciding to quit because they can afford to. Encouraging people to work longer may be good for some personally, and not so good for others, but the whole problem is about the way in which resources and wealth are shared around. And I use the word “shared” deliberately.

When we – both as a society and a government – make decisions which alter the way sections of the economy work, we’re making decisions which have consequences, but far too often we respond as though those affected by the consequences are wilfully choosing to be victims, rather than an inevitable result of our decisions. While last year, “we” were sympathetic to car industry workers losing their jobs as a result of the Federal Government’s belief that a free trade agreement was more important than sustaining the auto industry in Australia, “we” are less than sympathetic to all the workers who don’t have jobs because of decisions made in the past. The people who are unemployed in ten years time, because they would have been working in the automobile industry and who never manage to find consistent employment won’t receive as much sympathy as those who lose their job now.

There are many difficult economic questions facing Australia as the mining boom winds down and the population ages. but was nothing in Mr Hockey’s performance this week that seemed to suggest that he had even the slightest handle on the real questions, let alone anything approaching answers.