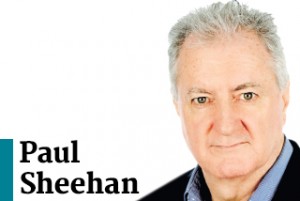 Now, I’ve always thought that there are certain opinion writers who set out to make themselves controversial in much the same way that shock jocks work. There’s no point in saying something reasonable; controversy and angry argument sells. If the topic is about doctors prescribing too many drugs because of kickbacks from pharmaceutical companies, we don’t want people who’ll rationally discuss both sides, we want someone who believes in alternative medicine against a representative from a multinational drug company. So I had mixed feelings about giving Paul Sheehan any attention at all.

But there was one thing that gnawed away at me. It’s a concept that I think is worth fighting for. The idea that everyone has a right to participate in the democratic process. Paul Sheehan wrote: “But, otherwise, this site is fake on every level. It is the work a single social activist troll, which means unemployed, who shall remain nameless at this point.”

I am reminded of the late Lionel Murphy, who, when presiding over court case where it was stated that the defendant was a “well-known agitator”, made the wonderful statement: “Mr Neal, is entitled to be an agitator.” The idea that the site was “a fake” because it was the work of someone unemployed, or because they were an activist is part of an argument that I’m sure we’ll hear a lot of over the next three years. We’ll be told no-one is really opposed, it’s just the greenies or the unions or the usual suspects or professional demonstrators. (“Where does one apply to be a professional demonstrator? – I’d like to get paid!)

So, I set about to get the other side of the story. Who was this unemployed male who acting alone, but who had enough money to pay for likes? Mm. Straight away something doesn’t make sense. So I decided to get more information.

Despite what Sheehan has concluded, I am, in fact NOT a male. I am in fact, a single white female in my early 40’s. I don’t fit into any of the stereotypes scribbler Sheehan has described. I work full time and have done so for 30 years (I started work at 13). I am a member of a union and have been for most of my life.

Well, Paul Sheehan isn’t a journalist so I guess he didn’t have time to check his facts. Wait, is he a journalist? Ah, doesn’t matter, I’ve got a deadline.

I actually set up the page back in March 2013 and had hoped I wouldn’t have to use it. I activated it on the night of the federal election. Within 12 hours the page received 150,000 likes (not one of them paid for).

What do you want to achieve?

At first, I just wanted the page to be a piss-take on “Julia Gillard – Worst PM” and really only expected a few hundred likes, mostly from my friends. Now that it has exploded, I want to be able to offer a “safe haven” (as best I can) for people to be able to post their anger and frustration about Abbott and his government without the standard hate-filled vitriolic responses one usually receives on “pro” Abbott pages.

I noticed a post where you said that any racist comments would be removed and the people making them banned from the site. Are there any other rules about who can comment and what they can say?

There are no rules as such and to be honest, for a page with our numbers, it is very hard to police. I do not allow racism as I absolutely abhor it. I make no apology for singling that out but we do also monitor sexist comments and hate-filled speech. I have also asked our moderators to delete any comments they see that contain any references to assassinating Abbott. I have 9 moderators and they are all real-life friends with the exception of 3 who are Facebook friends of friends.

I suppose that you read the Paul Sheehan article. Any comments?

Sheehan’s opinion is not one I have ever valued. He is unashamedly Liberal biased. I don’t have any time for Murdoch’s minions and long for the day when journalists with integrity return to the fore. Sheehan may think the content of the page is fake but therein lays the true irony. Much of what we post comes from the media outlets he works for.

I’m not sure how people having the ability to post what they like on a Facebook page is a display of closed-mindedness. On the contrary. Isn’t it our democratic right to form our own opinions and share our thoughts and ideas? Our members have had enough of the en masse brainwashing that has occurred for the best part of the last 5 or 6 years via our one-sided mainstream media. They are looking for an alternative voice which is why pages like ours are so popular. It is why people are turning to AIMN, Independent Australia and The Guardian for unbiased reporting. Or at least, the other side of the debate. Balance.

And as for his charge that you a buying “likes”?

I’m sorry to disappoint Sheehan but not one of our likes is fake. Yes, we have some members who use fake profiles but they are usually Liberal trolls too ashamed to post under their real names with their real pictures. We flick them pretty quick. I know it would be convenient to Sheehan for our page to be bolstered by fake likes but the reality is, we didn’t need to buy our members. Unlike of course Tony Abbott with his unusual overnight number explosions on Twitter and Facebook. Yes, it is most inconvenient that Abbott is just not well liked. Not well liked at all.

It seems to me that many of the accusations from Paul Sheehan were easily verifiable. He, for example, suggests that the group’s number of Facebook likes is “bogus”. He gives no reason for such a conclusion, and it seems he’s either misinformed or just being provocative in the hope of gaining attention. Rather sad really, when someone with a column in a widely read newspaper feels that the most important subject that they can discuss is their inability to believe that there are 166,000 people who are opposed to Abbott. Personally, I believe – and I think my beliefs are just as good as yours, Paul – that the figure 166,000 is rather low. I could cite evidence, but that’s not what an opinion piece is about, is it, Mr Sheehan?