My father rarely talked about the war, though when he did it would be no more than a few words.

I’m sure that after spending two years in the steamy jungles of New Guinea he would have much to complain about, but I only ever heard a couple of complaints: It was wet, and it was “bloody” hot (“bloody” being the strongest profanity that would pass his lips). On another occasion he told of going without food for three days, and as an added inconvenience people were trying to shoot him. It was a comment, not a complaint.

After the war ended the first thing he did was to forgive the enemy. Like him, they were guys sent to war by their government. He even respected the enemy, for in his mind as soon as you lost that respect… you were off your guard and you were vulnerable.

No, he didn’t hate the enemy. But he did hate their government for sending them – and ultimately us – to that bloody war in New Guinea.

(But he would have done it again, without complaint. When he was 63 he told me that even at his age he would sign up to fight for his country if he could. My father always had this sense of duty).

It was not until he was 90 that I heard his first complaint. It was one that sickened and angered me.

Happy to have his brand new walking frame, he was out and about in the mall of his regional Victorian city. (I accompanied him once. He would walk as close to the corridor walls as he could, so not to impede other pedestrians). But on this day he was alone, hobbling down the mall with three teenage schoolgirls heading towards him. They stopped, but they didn’t move. They refused to move. My father – by now the subject of an earful of abuse – had to move for them. This poor old bugger who had left behind a wife and young son to fight for his country and his freedom, this old bugger who had watched his mates die, this poor old bugger – barely mobile – had to get out of their way as well as tolerate their abuse. It was too much of an inconvenience for them to take a skip to the right.

(They didn’t know my father, or anything about him. Would it have mattered if they did? Probably not. One thing they certainly would not have known – and perhaps not even bothered about – was that all his life he regarded all Australians equal).

My blood boiled. I so wish I had have been there.

We see it every day.

Just replace my father with a Baby Boomer, or a rape victim, or a refugee, a homeless person or an Indigenous Australian.

And replace that group of school children with our government, or with sexists or racists, or with our mainstream media.

We have a federal government who are masters at creating this divisive society, doing so, of course, to deflect the anger of their failures back onto Australians who are different because … (fill in the blanks).

Do you have any blanks you can fill in for me? 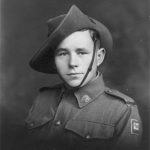 And thank you for your service to your country.