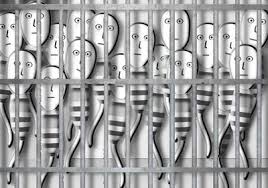 Dr Napthine said the new medium security male prison, to be built at Ravenhall in Melbourne’s West, will now be expanded to accommodate 1,000 prisoners. The prison was initially announced as a 500 bed facility on a footprint for 1,000 beds.”

A few months ago, Victoria’s Premier, Dennis Nap-time announced plans for a new prison. The cost of building this was well over a half a billion dollars. That doesn’t take into account the $100,000 or so per year that it costs to keep them a person in jail. But I have a much better plan.

We can’t afford this sort of money, so we should let most of the prisoners go. Just keep the most violent and dangerous. Release the others. Don’t prosecute any new offenders unless they’re a risk to the community.

Forget this law and order policy. Many crimes are financial or drug related. If a person is caught doing a robbery, just give them $25,000 and tell them not to do it again. A repeat offender would get $50,000. After that, we start can send them to a course on financial management. And supply drugs to the addicts. It’s a much cheaper solution. And it should ensure we retain our triple A credit rating.

Strange though, that when hospitals need more beds, or schools need more classrooms, they have to wait until the economy’s in better shape. Strange that we can allow people to go without treatment rather than say that this too, is a priority. Strange that we can slash spending on TAFE, and other educational pathways without a thought as to how much that may cost the community in the long run.

And strange that a “Get tough on crime” policy is never examined in terms of what we’re choosing not to spend the money on. Or even in terms of how cost efficient it is.

No, it’s easier to get the public baying for blood because a sentence is too light. (Although I don’t remember much about the leniency of the judgement in Andrew Bolt or Derryn Hinch’s court cases.) It’s easier to think that if we just lock people away for a few years, then the community will be safer without stopping to think that we may actually be “safer” if we spent some of that money on upgrading the ambulance system.

For sure, some people need to go to jail. But, as absurd as my suggestion for simply giving people the money may be, how much could we have saved if we’d spent the money more effectively in the first place.