For those that don’t know much about the cashless debit cards (CDC), or income management, here is an article that I wrote with some history about income management in Australia, and how the BasicsCard came about, and here is my most recent one about the Indue card here. For readers that have already read these articles, please know that I have updated and edited them to reflect changes since writing them, and so that they can be read consecutively. We can also forget about the propaganda relating to the government doing it out of love for those with drug or alcohol problems. Why? Because there is already a government program set up for vulnerable people that have these problems, and yet they’re exempt from the CDC trials. Now that you have this background knowledge, let’s look at the bigger picture, and what it means for every single one of us if these types of policies continue.

What’s really happening is that the role of governing, and the public monies that fund governing, are being handed to the private sector piece by piece. Think about this, a private company, Indue, has not only been handed the power to dole out security payments for people, but also to decide what they can and can not buy, even whether to suspend or cancel a payment. Compare this with what is happening with human services that used to be run by the government, such as: job service providers, the ParentsNext scheme, the NDIS debacle, Centrelink call centres, even PaTH Internships. We must also consider how private consultants are taking over the role of public servants, as well as the outcome of the privatisation of: major banks, airports, toll roads, the NBN, the energy sector, detention centres in Nauru and Manus, public transport, prisons, and private security companies, et al, to really see the full picture.

The transfer of power over the people from government, to the private sector, is the corporatisation of governing by stealth. I say stealth because governments have rarely taken these issues to elections, nor asked what the people want, they’ve done the bidding of lobbyists, donors, and corporations. This has been done very successfully in America since the 1980s, especially so with private security companies, it partly explains why they’re perpetually at war with other countries, there’s money to be made.

Yes, society is increasingly going cashless but we will always need cash as a backup plan with never-ending online bank outages, emergency events such as bushfires, and because we’re not all digitally literate or connected, across such a vast continent. In 2016 Germany ended up deciding against introducing a €5,000 cash transaction limit. It’s also of note that early this year the International Monetary Fund (IMF), suggested that to keep central banks relevant and to make negative interest rates work, cash would need to be phased out. Imagine paying to keep your cash in the bank. Meanwhile our own government is currently pushing to ban cash transactions over $10,000 or more, this is being done under the guise of going after the ‘black economy’, despite IMF studies finding that our black economy has almost halved over the past 20-years. There are even fines and a gaol sentence on the table by our government if you don’t comply. Quite the punishment when we consider continual corporate tax evasion, and the latest scandal by another one of the big banks, Westpac, which broke anti-money laundering laws 23 million times. All of this despite the Banks Royal Commission.

Last month Dr Johannes Beermann, Member of the Executive Board of Germany’s central bank, made some valid points where he promoted the importance of cash in his speech to the Payment Asia Summit in China, stating that:

“Cash offers an easy way out” from being locked into electronic payment systems; cash gives “independence from social control and data collection”; and “Cash is the obvious choice of payment method when it comes to personal privacy. This strengthens individual freedom.”

People should be able to have the freedom to do what they like with their finances, humans need autonomy to function healthily, it’s a human right of which the CDC and a cashless society takes away. 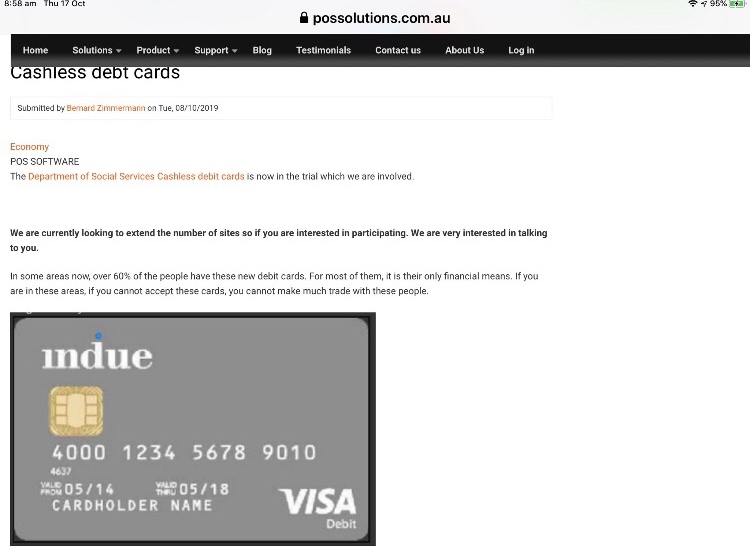 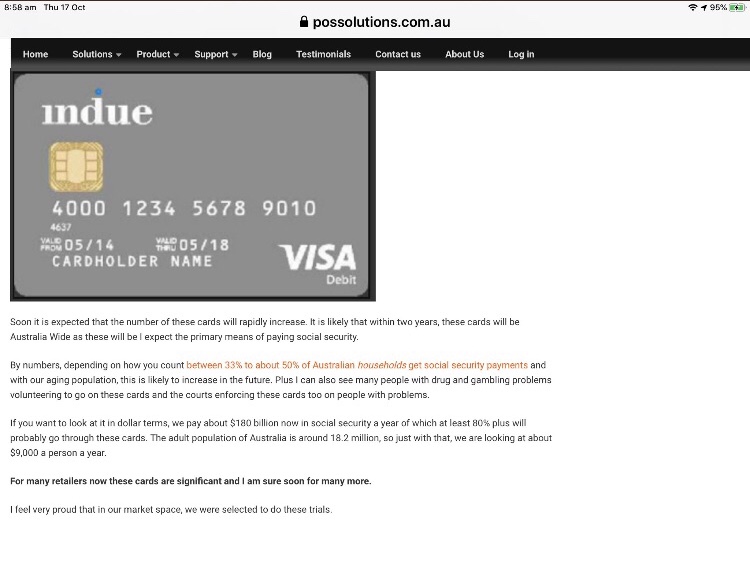 In case the screenshots are hard to read, here is the text from them, I can’t provide a link as the blog was pulled down once it started to get attention by CDC activists:

“We are currently looking to extend the number of sites so if you are interested in participating. We are very interested in talking

In some areas now, over 60% of the people have these new debit cards. For most of them, it is their only financial means. If you are in these areas, if you cannot accept these cards, you cannot make much trade with these people.

Soon it is expected that the number of these cards will rapidly increase. It is likely that within two years, these cards will be Australia Wide as these will be I expect the primary means of paying social security.

By numbers, depending on how you count between 33% to about 50% of Australian households get social security payments and with our ageing population, this is likely to increase in the future.

If you want to look at it in dollar terms, we pay about $180 billion now in social security a year of which at least 80% plus will probably go through these cards. The adult population of Australia is around 18.2 million, so just with that, we are looking at about $9,000 a person a year.

I feel very proud that in our market place we were selected to do these trials.”

Is this person privy to information that the public is not? Time will tell. What we do know is that neoliberalism and ‘dole bludger’ propaganda, has over time, dramatically changed how many Australians view social security assistance. We are a resource rich country, it’s an obligation of the government to share the wealth with those that need it. You could also say that it’s an economic stimulus, not so much if it’s given to third parties like Indue, to manage.

The next part will look at how Indue and the government is getting away with it, and the push to open up income management for the banks.