“But he never told me. Surely as his boss I have a right to know.”

“Yes, I know he is but it’s normal practice to inform me. Where’s he gone?”

“Can’t tell you that either…”

“It’s the busiest time of the year and he didn’t tell you when he’d be back?”

“Calm down. People are entitled to their long service leave.”

Yes, you can all see how unreasonable my boss is being in that little fiction. Of course, it’s a fiction because you’d never go off on a holiday without telling the person you work for, so when Morrison doesn’t tell the Australian people it’s because it’s not us that he works for.

Obviously, it’s only Twitterage that’s upset about Scottie’s little Hawaiian adventure… That and some of the journalists who were told point-blank… or should that be point break… that he wasn’t in Hawaii. It sort of made them wonder if they can trust anything coming from the Prime Minister’s Office. Journalists are not stupid… A little slow, perhaps, but not completely stupid.

By now most of you have probably seen the photo of the “legend”. Scott Morrison doing the hang ten sign, which I’m told means that he’s having a good time.

It always worries me a little when kids call me a “legend”. It makes me sound like I’m the teacher who’ll always be remembered for doing something wrong like handing out the actual exam instead of the revision sheet. (No, that wasn’t me!)

Of course, it usually goes down a treat when someone in authority does something a little bit out of character which shows that deep down they’re just like the rest of us really. So when the PM sculls a beer at the cricket it goes down a treat with the crowd. It’s a bit like when Auntie Maude has a wee drink at Christmas and suddenly starts dancing on the table-top. It’s not so funny when Uncle Roger has his weekly slab and crashes into your parked car…

I can’t help but think of Fonzie. I was never a regular “Happy Days” watcher but it was sort of impossible to miss. At first “The Fonze” was just too cool for school. You know, the “you’d never catch me doing that” kind of guy. So when he was first talked into something to save the day, it was funny because it was just so out of character. And, because it worked, the next thing you know, pretty much every episode had Fonzie doing something out of character.

The trouble is: Once you do something regularly, it’s no longer out of character.

And that’s the thing I sort of feel when I’m watching Morrison. It’s like he’s trying to say that I’m really this everyday sort of bloke, who’s just like all of you.

There’s just two things wrong with this. First, not only do I not believe it, but I don’t believe that he believes it. Second, I don’t what my leader to be someone who’s “just like me”. If that’s the case then I might as well be leader, because what have you got to offer if you’re not brighter, more hard-working and prepared to make sacrifices? You know, sacrifices like forgoing your family holiday because there’s a national emergency. But as the man said: “I don’t hold a hose, mate, and I don’t sit in a control room,” He could have added: “and I don’t provide leadership or show compassion unless it’s for a photo opportunity.” Instead, he added:

“That’s the brave people who … are doing that job. But I know that Australians would want me back at this time … of these fatalities. So I’ll happily come back and do that.”

Mm, is it just me or does it suggest a certain lack of empathy to say that one will happily come back after talking about the fatalities? Anyway, he called the interviewer “mate” so that proves he’s a regular Aussie guy. I wonder if anyone is even tempted to call him “mate” back…

Whatever, Morrison is back and he’ll be going straight to a map to be shown where the fires are burning and then he’ll go to some evacuation centre where he’ll hug someone and say that we’re all in this together. And the media will be allowed to tag along and nobody will ask him about evacuation centres that wouldn’t allow the media nor whether he agrees with government MP Andrew Laming’s tweet which shows he doesn’t know the difference between hazard reduction burning and back burning. 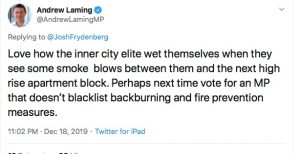