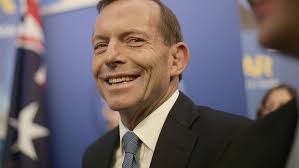 Tony Abbott is your friend.

In fact, he’s everyone’s friend. He’s so inoffensive to anyone that why there should be resistance to his schemes is inexplicable. Tony Abbott, and his Coalition, are unfeasibly flexible; whoever you might be, whatever interest group you represent, the Coalition is on your side. One day Abbott will be patting you on the back and swearing his undying support for your cause; the next day he’s in the enemy’s camp and promising your head. Tony Abbott is the friend who will promise you undying support, so long as it will not require him to take action against the other group to whom he has already pledged his undying support.

This article was originally going to be about the shape of Tony Abbott’s first week in government, if he’d really been held to all the promises he had made. The first week would have been spent in the north of Australia, but it’s doubtful whether Abbott would have had the time to focus on indigenous issues considering the hectic schedule of legislation he had promised. Carefully-worded non-promises aside, however, many of the concrete legislative promises which the Coalition offered have been met on schedule – at least to the point of beginning investigations and committees, if not the actual drawing of legislation. Blandishments in the current world of politics need to be made very carefully. Tony Abbott himself raised the petard of “liar”, of an inflexible requirement to deliver exactly what you promised during a campaign. Leading politicians are now very aware of this pitfall and make certain to couch their statements and their support in terms that are vague enough or specific enough in their limitations that you can get away with less than people thought you had promised.

So the article went on hold. Then the Prime Minister’s hectic round of international travel and meetings began and gave another angle to examine. The thing in common between the promises made, over many weeks to many audiences, about initial actions and legislation, and the approach to international leaders, has been one of inconstancy. Or more precisely, being a “man for all seasons” – constantly nodding agreeably to whomever he is addressing.

It’s partly an outcome of the small target approach the Coalition took to the election campaign, and in the heat of an electoral campaign a bit of “policy flexibility” may be excused. It’s not as if the Coalition is unique in this regard; Kevin Rudd took the art form to new heights himself, earning himself the moniker Chameleon Rudd.

However, once in government, and temporarily freed of the pressures of a looming election, a politician is lumbered with certain inconvenient hindrances that don’t harness him/her in opposition; hindrances like actual power, and actual interactions with people outside of the need to get them to vote for you. In this circumstance, it becomes necessary to have the courage of your convictions; in Tony Abbott’s parlance, to “say what you mean and do what you say”. It is disheartening to see that the Coalition, one month into government, appears to be maintaining its approach refined so successfully during its time in opposition. In any number of ways Tony Abbott’s Coalition is still an Opposition, still seeking to demonise the failures of the other side whilst minimising scrutiny of their own intentions and actions. And they are still telling people what they want to hear, assuming they tell them anything at all.

It may be instructive to examine a few of the many faces of Tony Abbott and the Coalition.

Japan is Australia’s closest friend in the region. However, we are also BFF with Indonesia, “in many respects our most important overall relationship”. Except, of course, for Papua New Guinea, because there is no more important relationship for Australia. One wonders how many respects are left to qualify Tony Abbott’s statement that “New Zealand is in many respects Australia’s closest relationship.” One can only hope that if they’re ever in a room together, those four countries can work out where their relative standings with Australia sit, because I certainly can’t.

Australia’s sovereignty and ability to feed itself is at risk. So obviously the laws surrounding foreign investment need to be tightened up. Except that we also need to inject “…momentum into deals with China, Japan and South Korea as a matter of urgency” and lure foreign investment back. It helps that the Coalition has under its roof representatives who passionately believe in foreign investment, and those who obstinately oppose it, so it’s possible to send the right person to the right forum to ensure the right message is given. So long as they don’t go telling their position to the media, which gets read by interests of both persuasions.

Tony Abbott’s varied positions on climate change are well documented. Commencing with his famous 2009 statement that the science around “climate change is crap” – itself a 180 turnaround from his previous position – he has been variously a supporter of a carbon tax, a trenchant opponent to any kind of market mechanism, a reluctant convert to the anthropogenic origin of global warming, and most recently both an advocate of the Direct Action plan’s ability to meet targets, and an apologist in advance of when it doesn’t. About the only position he’s not recorded to have held is support for a market-based price on carbon, which economists and ecologists alike think has the greatest bang for buck in carbon abatement. Of course, his actions upon reaching government hark back to his original poor view of climate science, indicating that if he’s unable to change his opinion in an area where the science is becoming ever more irrefutable and the consequences ever more dire, he is unlikely to change his original beliefs in many other areas either.

It’s commonly accepted wisdom that Workchoices was the Coalition’s downfall in 2007. Tony Abbott was regarded then as a moderate, which may be part of the reason that Labor’s personal attacks on the man and fear campaign regarding the resurrection of Workchoices policy was not as effective as hoped. In this policy area, the Coalition is spoilt for choice when it comes to the messages they deliver the electorate. Do they roll out Tony Abbott, the “best friend of workers“? Or if the audience is made up of big business and industrial heavyweights, would it be more appropriate to send in workplace relations spokesman Eric Abetz?

It’s true that the Coalition’s IR policy – this term – is cautious, to the point that some business leaders and ex-politicians have called it “timid”. The sense is that this is an area where the electorate is still tender after being bitten by the Coalition’s previous attempt. There are exceptions, though, largely because the Coalition wants to be able to give big business good news. Thus we see the push to reinstate the Australian Building and Construction Commission, a body whose primary achievement was to decrease workplace safety and lead directly to a spike in workplace accidents and deaths. And we see the vilification of unions.

Unions are one group to whom the Coalition does not seek to speak softly. This is why the Coalition’s rhetoric has been about “union thuggery” and “union corruption”; the intent is to drive a wedge between workers and their historic support groups. Unions provide monetary and other support to Labor and it is for this reason that they must be curtailed, but you can’t directly attack the union movement without first discrediting it.

The weakness of Teflon Tony

The examples above are prominent policy areas, but the technique of saying to each audience the thing most closely calculated to their own hearts is one that sees use in a multitude of areas. Whether he’s telling farmers that they should have the right to refuse entry of mining leases to their farms, or supporting the ability of mining companies to enter private property at will; whether he’s promising that a paid maternity scheme will be “over my dead body”, or proposing his own scheme an order of magnitude bigger than the one that Labor had just rolled out to acclaim, Tony Abbott and his Coalition will say anything to anyone. Words are cheap and promises are meaningless.

In late 2012, in the throes of the US election, Republican candidate Mitt Romney self-destructed because of this exact kind of policy vagueness. In the case of Romney, the Democrats and at least some parts of the media were willing to draw attention to his various contradictory promises and policy positions. The message to Australians is that it is possible to overcome a hostile media (in the US, Fox News is almost as overbearing as the various Murdoch enterprises down under) – so long as there is a will to expose inconstancy for what it is. It’s too late for 2013, but if the Coalition will maintain its T-1000 approach to communications, it will soon enough be time to highlight that for every favourable position the Coalition has held, it has also held the alternative position, and the only real way to tell the intentions of the party in the future is to examine them in the recent past.

We all know to judge a man by what he does, not by what he says. This is doubly true of the Coalition. During the next term of government, and leading into the next election in three years – if not before – the left, and the media, need to focus not on the Coalition’s statements, but on the range of opinions they have held as a backdrop to their statements; and not what the Coalition says and promises, but on what it has done.

If you believe in a fairer, more considerate Australia, a more progressive Australia, a clever country that designs and builds things and innovates new technology rather than relying on the non-renewable resources with which this country has gifted us, then Tony Abbott is not your friend. Whatever he might say to your face.