The other day, former AFL player, Dane Swan, had his thoughts on the Melbourne lockdown reported in what’s alleged to be a Melbourne newspaper after which a number of people took to Twitter to point out Dane’s lack of expertise in the area of epidemiology and crisis management. (To be fair, I think that a look at Swan’s playing career and life would suggest that he may have some expertise in the latter…) This response led Mr Swan to tweet the following: 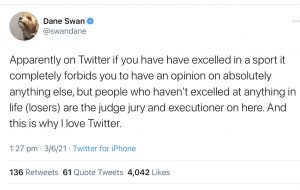 Of course, this is one of the great things about platforms like Twitter; they enable anybody to have an opinion no matter how many head knocks they may have suffered. The terrible thing about Twitter, as Dane Swan points out, is that sometimes people have an opinion which differs from one’s own. Swan’s tweet seems to suggest that while one shouldn’t be excluded from an opinion just because one is a sportsman, losers who haven’t excelled are losers and shouldn’t be allowed to judge his thoughts.

It’s a common thing in social media and we shouldn’t be surprised that a whole range of people have a whole range of views. Neither should we be surprised when people start pointing out other people’s lack of experience/qualifications/breeding/intelligence or anything else that they feel is relevant to helping to explain why said person has no idea what he’s talking about.

The problem isn’t that social media has a lot of opinions that most people would be better off ignoring. The problem is that the level of discourse in the political realm generally is no better. For example, when Wayne Swan was named World’s Best Treasurer by a group comprising leading European bankers and investors, did the Liberals acknowledge the honour and congratulate him? Did social media think that these people must know more than they did because they were looking at criteria other than “Does Alan Jones approve?” No, it was ridiculous because he’d sent the country broke! We had no more money. Strangely we now have three times the debt and an enormous deficit but the Liberals found a trillion dollars in the back of the couch, and in spite of the lack of a budget surplus, they’re supposedly managing the economy well and various people are expressing thanks that Labor isn’t in power because they’d be spending too much money…

So what about Norman Swan, who like Dane, is no expert in epidemiology? The difference is that Norman is doing research and presenting the research. He doesn’t argue that he knows everything. Neither does he argue that nobody else has a right to an opinion. Compare this with the way in which some of the media present information. One ABC presenter recently argued that – as two test results were “false positives” we should wait until we’re sure that tests aren’t positives before adding sites to the exposure list. The expert she was talking to was trying to explain that it would be too late to stop the spread if they waited until everything was double-checked before releasing the possible exposure sites. “Yes, but some people had to isolate unnecessarily!” Apparently this is a bigger problem than if they were allowed to roam free spreading the virus for another couple of days.

When it comes to expertise, the media often make the mistake of thinking that getting one thing right qualifies one as an expert. Frequently when there’s a share-market or property downturn, they’ll search up some guy and announce that Mr Doomsday is a genius because he predicted this and then they’ll ask him what they future holds. Never mind that Mr Doomsday has been predicting the same thing for thirty years and he’s been warning that this is imminent. Predictions of this sort can only be useful if the time frame is within a reasonable limit. For example, if I tell you that this year’s Melbourne Cup will be won by a female jockey, you’ll hardly consider me to be worth listening to if it’s 2034 before the next female jockey wins it.

Nassim Nicholas Taleb wrote an interesting book called “The Black Swan” which put forward the proposition that there were sometimes unpredictable events which had enormous consequences, but that, when looking at them introspect, humans frequently talked about them as though they inevitable and obvious, rather than a random, disruptive event. The Europeans believed that there was no such thing as a black swan and refused to believe that they existed. Once it was established that Australia had them, and no it wasn’t a painted white swan, then it became mundane and so what!

The interesting thing about Taleb was that he predicted the possibility of something like the Global Financial Crisis. His basic argument was that we couldn’t be sure that we had it all under control because the unexpected is always a possibility, and in terms of history, likely. When he was being interviewed about this after the GFC, one interviewer asked what he thought would happen in the future. After all, he’d been right about the future being unpredictable, so why not??

The fact that Taleb got that right hardly qualifies him to prognosticate any more than if I say, “Here’s my Tattslotto numbers but I have no idea which numbers will come out because it’s just random!” It’s hardly going to have people celebrating the fact that I was right about not getting them right and asking for my expert forecasts on other matters.

Yes, we’re rather drawn to those making predictions even if they have no history of them ever being correct. Even though we didn’t predict the GFC, Tony Abbott winning the leadership of the Liberal Party, Tony Abbott being removed as PM by his own party, the vote for Brexit, the election of Donald Trump, Labor’s loss in 2019, the pandemic, but somebody will tell you that they’re sure that Morrison will be re-elected, even before the date is announced.

Anyway, I’m waiting for “The Herald-Sun” to interview Dane Swan on his thoughts for how to resolve the Israel-Palestine conflict.