When a worker refused to shake Bill Shorten’s hand in the election campaign, it made headlines. Bill should take a leaf out of Scott Morrison’s book who knows better than to let someone get away with that.

Here we see a woman reluctant to shake his hand. Knowing that a photo can be paused anywhere, Scomo, using his famous “space invader” tactic, shows Bill how it should be done. Rather than being left hanging, he does something he hasn’t been able to do for much of his Prime Ministership: he takes his hand out of his pocket. He then uses it to grasp her wrist. 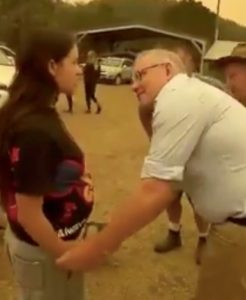 With a firm grasp on her arm, he manages to force her hand into his where he gives it a hearty, Mark Lathamesque pump, before walking off when she asks for more funding for the RFS. 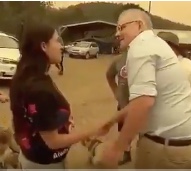 At this point, I should issue the warning that this is only an approach that I would recommend to politicians. Don’t, for example, think that you can use the same approach if a person doesn’t want to kiss you at the Christmas office party, as political correctness gone mad demands that you obtain consent from people before manhandling them.

Just in case, you think there was something sexist in his approach, our Prime Marketer also showed the value of his empathy training by approaching a resting firefighter. Unlike most Liberal politicians, he didn’t ask him why he was resting. Instead he offered his hand. 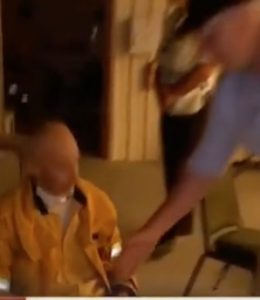 This time, when it became clear that the man was just going to look disdainfully at the hand, Scottie adopted the switch approach, by quickly turning his hand and grabbing the fellow’s left hand as though this was some secret handshake between trusted colleagues. 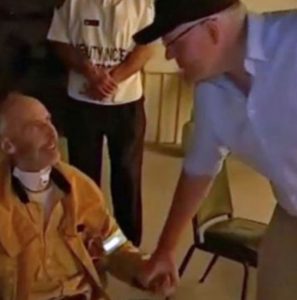 Later, Morrison further showed the value of his empathy training by explaining that he didn’t take it personally and he understand that these people were just upset that they wouldn’t be able to make it to the cricket.

He went on to say, “There’s been a lot of noise and issues that people have sought to raise about these fires.”*

Noise? Don’t people realise that he only listens to the quiet Australians? You know, the ones who are saying anything…