Scottie Morrison was grumbling about superannuation funds not investing in coal. Apparently, according to Mr Morrison, they’re doing so for ideological reasons. As he told us:

“Some industry funds, for example, won’t allow their funds to be invested in coal shares. Now that’s got nothing to do with returns necessarily, that’s got to do with politics, and their view about those particular issues.”

He went on to express the hope that union run super funds weren’t investing in things like windfarms because… well, the outlook on them is so unsure. Actually I bought some shares in a windfarm last year for $0.26; yesterday they were $1.02. Silly me, making my investment decisions on ideological grounds like that.

Of course a couple of years ago, various Liberals were bemoaning the fact that a university had taken its funds out of Santos. Let’s just have a look at a graph of Santos’ perfomance over the past three years, shall we? 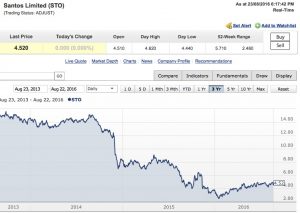 Oh dear, what silly people getting out of Santos when it was about $14 a share. If they’d held on they’d have the satisfaction of knowing that it had recently risen so it may be as high as $5 a share if it can just go up by another 12%.

Of course, I wonder if Scottie had been around a few years ago whether he’d have been telling us all that people not investing in Kodak was because of all the greenies who thought that they were environmentally unfriendly because they printed their film on paper. I wonder if he would have told us that he hoped that nobody was investing in those silly digital camera things and not sticking with a great institution like Kodak.

Yes, and I’m sure he would have lamented our lack of interest in Blockbuster. I mean, how can these companies that rely on that Internet thing compete with video stores? How can they hope to make any money when it takes so long to download a movie?

Mm, actually maybe he and Tony and Joe did invest in Blockbuster. That’d explain their policy on the NBN, which I understand is completed on time and under-budget and we all have all the download speed we need providing we’re not too greedy.

Which does raise another question. Has Scott Morrison invested in coal companies personally? If not, why not? After all, he is claiming them as a great investment.

On the other hand, if he has, then he surely has a conflict of interest when telling superfunds to get into coal.

Either way, it seems a no win proposition for the Treasurer to start telling superfunds what they should be investing in. Unfortunately, Ray Hadley didn’t bring up the investment advice of a couple of years ago when the Liberals were pumping for the uni fund to stick with Santos.

Ah well, I’ll just stick with my renewable energy stocks and take the chance that coal makes a come-back. Even if those windfarms are an ugly blight on the landscape and lack the majestic beauty of an open-cut mine!